To mark the 40th anniversary of the Marathon of Hope, John Kearsey, University of Manitoba Vice-President (External), joins 39 revered Canadians in recounting in a new book the inspiration, dedication, and perseverance that Terry Fox embodied, giving voice to an icon whose example spoke much louder than his words.

Forever Terry: A Legacy in Letters begins publishing on Sept. 1, 2020, 40 years to the day Terry was forced to stop running outside Thunder Bay. 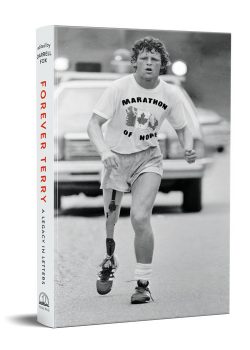 Comprising 40 letters from 40 contributors, and edited by Terry’s younger brother Darrell on behalf of the Fox family, Forever Terry: A Legacy in Letters,  pays tribute to Terry’s legacy, as seen through the eyes of celebrated Canadians ranging from Margaret Atwood, Bobby Orr, Jann Arden, and Christine Sinclair, to those who accompanied Terry on his run, Terry Fox Run organizers, participants, supporters, and cancer champions. Appearing alongside never-before-seen photos of their Winnipeg-born hero, their reflections reveal connections that readers would never have expected, and offer a glimpse into the way goodness and greatness inspire more of the same.

Forever Terry is a testament to the influence one brave man has had on the shape of Canadian dreams, ambitions, and commitment to helping others. Author proceeds support the Terry Fox Foundation, which has raised over $800 million for cancer research.

“Terry inspired me when I first saw him on the evening news, dipping his foot in the St. John’s Harbour. His determination, resilience, love for life and for others inspire me every day and has shaped my thinking from a young age,” says Kearsey, “I am deeply humbled to be included in this legacy project.”

In 1985, Kearsey was named a recipient of the Terry Fox Humanitarian Award and today chairs its board of directors. Very soon the Terry Fox Awards will announce its 2020 recipients who reflect the highest ideals of humanitarianism and service as demonstrated by Terry Fox.