With this year’s theme being oceans, we thought this is a perfect time to highlight the world-leading Arctic climate change research done by UM researchers and collaborators in the Churchill and Hudson Bay region via the award-winning Expedition Churchill: A Gateway to Arctic Research e-book.

The research teams at the UM’s Centre for Earth Observation Science (CEOS) teamed up with VIA Rail, The Town of Churchill, the Churchill Northern Studies Centre, Assiniboine Park Zoo and Travel Manitoba to produce the interactive e-book.

Did we mention the e-book is an award winner? Expedition Churchill received two Prix d’Excellence awards—Gold and Silver—from the Canadian Council for the Advancement of Education, a national awards program that recognizes outstanding achievements in alumni affairs, public affairs, marketing, and overall institutional advancement in higher education.

What follows is an excerpt from Chapter 5 of Expedition Churchill: A Gateway to Arctic Research.

To more fully understand the Hudson Bay complex, you have to look beyond its shores:

Hudson Bay is an inland sea, fed by rivers that drain almost one-third of Canada. This results in so much freshwater run-off entering the system that if it was spread evenly over the entire bay, it would create a layer a metre thick. Added to this, an even greater volume of fresh water (a layer of about 1.5 metres) comes from the melting of sea ice each year.

This fresh water is important to both the physical and biological systems of the bay. It restricts nutrients that have settled on the bottom from cycling to the surface. This limits the growth of algae and phytoplankton, the base of the food web. This effect, known as vertical stratification, makes the bay behave more like one large estuary, instead of a more typical ocean system. The gradient of warmer fresh water over colder, heavier salt water is also critical in driving the circulation of waters within the Hudson Bay complex and the world’s oceans. This process connects oceans to the Earth’s weather and climate.

To read more about how the surface layer of water affects what is below and other aspects of the marine system influencing our oceans, download the free e-book at ExpeditionChurchill.ca 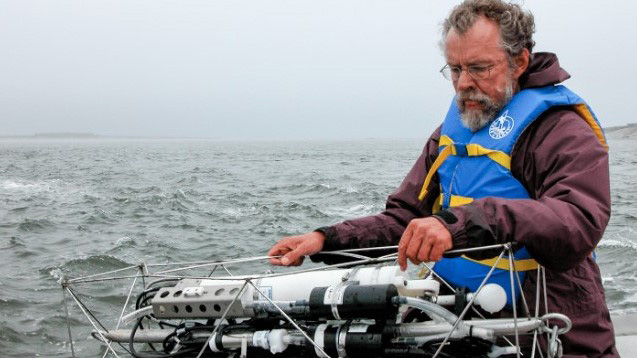 Dr. Greg McCullough, Research Scientist, Centre for Earth Observation Science, UM. // Photo credit: David Barber, UM/CEOS.  Click on the photo above to hear McCullough explain what aspects of this instrument contribute to data about what is in the water.

Science Literacy Week is powered by the Natural Sciences and Engineering Research Council of Canada (NSERC).