The astounding amount represents donations from 62,075 individuals, one in five of whom were graduates of the University of Manitoba, and from 48 different countries around the world, making this a truly global campaign.

“At the heart of this campaign are the donors who have put the work of University of Manitoba faculty and staff front and centre, magnifying their impact in our province and in communities around the world,” says President and Vice-Chancellor Dr. David T. Barnard. “This generosity was amplified by our volunteers—students, faculty, staff, community members, and the President’s Campaign Team—who together have achieved something truly remarkable for our province.”

He adds: “They are a reminder that even in such an exceptionally difficult time, we still have much to be grateful for.” 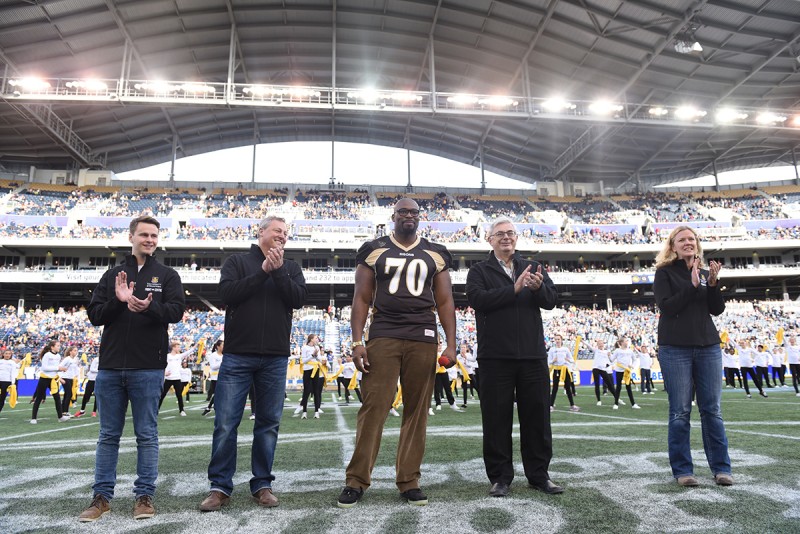 “When we launched the campaign, the goal seemed daunting. But, in true Manitoba tradition, where there’s a will, there is a way. It’s amazing what can be accomplished and how we can surpass even the loftiest of goals,” says Mr. Paul Soubry, President and CEO, NFI Group Inc., and Front and Centre Campaign Chair.

Acknowledging the current COVID-19 crisis, Soubry adds: “We know we’re all having a rough ride right now. We thought long and hard about whether it was the right time to share the success of the Front and Centre campaign. We went ahead because it feels good to take a moment to embrace good news—news that speaks to the strength of community.”

The good news of the campaign includes milestones such as $30 million from alumnus Dr. Ernest Rady, who made history four years ago when he announced the Rady Family Foundation’s gift of $30 million, which he and wife Evelyn dedicated to his parents, Rose and Dr. Max Rady, the latter a UM alumnus, physician and namesake of the Max Rady College of Medicine.

The Asper family built on a legacy of philanthropy that began with parents Israel and Babs, the next generation—David, Gail and Leonard—stepping forward time and again. The Asper Foundation’s most recent gift of $5 million will establish the Asper Foundation Entrance Bursary, removing financial barriers and making university possible for hundreds of students each year.

More than $5.9 million was given by faculty, staff and retirees, and more than $252.1 million to research excellence, including the support of UM researchers on the front lines of developing vaccines or antivirals to mediate the COVID-19 pandemic.

Dr. Barnard explains: “Gifts that came from far and wide speak to what matters most to our donors. They will ensure our province becomes a centre of excellence for Indigenous education and research. They will champion scientists and scholars making discoveries that contribute to global knowledge, grow the economy and offer real solutions in an ever-challenging world. They will have an impact that will endure far beyond our current crisis. They will inspire. They will shine a guiding light as we enter our new reality.”

Witnessing such widespread generosity inspired students to give, too. In 2016, UMSU made headlines when they announced a gift of $15.9 million to support student spaces, on-campus childcare, undergraduate research, and scholarships and bursaries for Indigenous students. An additional $25.2 million was donated through student referenda, which allows students to decide how to support their own faculties.

Read more about the Front and Centre campaign here, including stories about students and faculty who will benefit from better technology and learning environments, as well as researchers across all disciplines who are working to make this a better world for all.