Don Petkau, a senior instructor in the Department of Biosystems Engineering, was recently recognized by Engineers Geoscientists Manitoba as a Champion of Engineering Education. At the Biosystems Alumni of Influence Awards Luncheon on November 15, Petkau was presented with the frame of the nomination citation and a photograph of him. The frame will hang alongside past winners on the Champion of Engineering Wall in EITC. 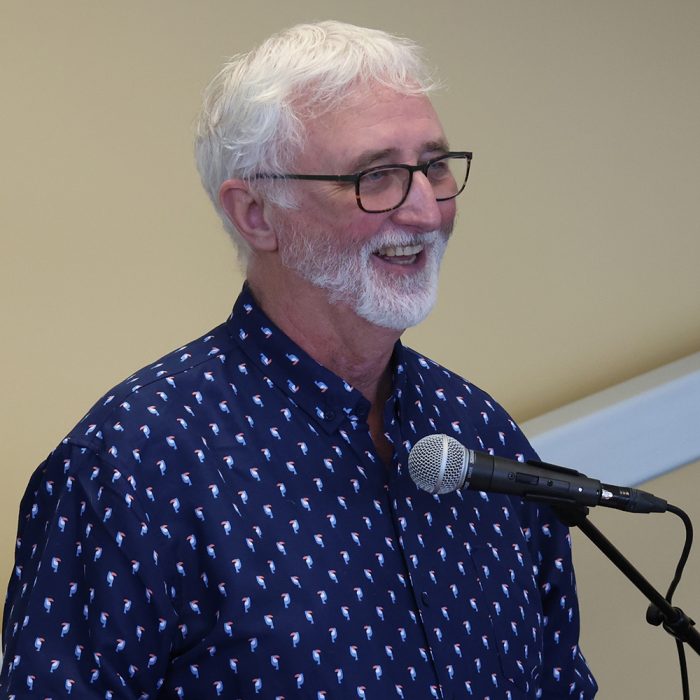 Petkau graduated from the Department of Agricultural Engineering at the University of Manitoba in 1985 before working as an Agricultural Manager with Roger’s Sugar industries in Manitoba. He then moved to Agricultural Research and Development with the Prairie Agricultural Machinery Institute (PAMI) in Portage la Prairie where he managed a staff of engineers and technicians designing agricultural machines and completing engineering projects for three years. In this role, he also collaborated with researchers at the University of Manitoba and University of Saskatchewan to develop mechanical harvesting equipment for sea buckthorn berries, which sparked his love for teaching.

Petkau began teaching courses at the University of Manitoba in 2001 as a sessional instructor. Since 2006, Don’s primary teaching responsibility has been ENG 1430 Design in Engineering. He was the coordinator for this core first-year course taught to approximately 500 undergraduate students annually. Petkau has regularly provided mentorship to engineering students belonging to the University of Manitoba’s Scale Tractor Team (UMATT). His advisory approach has contributed to the success and stability of this student-run team over the past decade. Under his mentorship, UMATT has become a well-established, inter-disciplinary team annually representing the UM with integrity and professionalism. The UMATT team has had a number of excellent showings at the annual competition, culminating in first place overall in the 2021 competition.

In 2016, Don was the recipient of the Excellence in Engineering Education Award sponsored by the Faculty of Engineering and he received the CSBE/SCGAB Glenn Downing Award in 2017 in recognition of his outstanding work in industry and teaching in the area of power and machinery.

As Dr. Petkau prepares to retire at the end of the year, the Price Faculty of Engineering thanks him for his outstanding contribution to our students and community, and congratulate him on receiving this award.