Dr. Amine Choukou and Dr. Reg Urbanowski with the first of the telepresence robots they are developing to assist dementia patients and their caregivers.

Some individuals living with dementia will soon have a new way to interact with their caregivers, no matter where they are, with the help of telepresence robots being developed by the College of Rehabilitation Sciences, Rady Faculty of Health Sciences.

The research project received $360,000 in funding from a new partnership between Research Manitoba and the Victoria General Hospital Foundation (VGHF) announced Sept. 24 during World Alzheimer’s Month.

A telepresence robot is a remote-controlled computer, tablet or smartphone-controlled robot, which may include a video-camera, screen, speakers and microphones. This helps the person interacting with the robot to view and hear its operator and the operator can simultaneously view what the robot is “seeing” and “hearing.”

People living with dementia in the community often require support from informal caregivers, usually family members who need a constant connection to their loved one while maintaining a career, home and social life.

“Telepresence robots provide an effective solution for minimizing the burden on informal caregivers of people living with dementia,” said Dr. Reg Urbanowski, dean of the College of Rehabilitation Sciences. “There are different kinds of telepresence robots, but the kind proposed here provides two-way communication for the caregiver and the person they are caring for when the caregiver is out-of-home, which could help them maintain a career, home and family life.”

Urbanowski is co-leading the project with Dr. Amine Choukou, assistant professor of occupational therapy, who held a demonstration of the first telepresence robot to be used in the project for media and invited guests at the Miracle Garden outside Victoria General Hospital.

“The idea, very basically, is a lot like teleconferencing without requiring its user to answer a call. You can make a call see, hear, talk, interact, and go anywhere,” Choukou said. He noted the caregiver can control the movements of the robot via a smartphone or computer, following the person with dementia around the home and even taking pictures.

“And if I am the person with dementia, I can see my family member or caregiver calling me on the screen and hear their voice. I also know they will be helping me get the robot back to the charging station, I don’t need to think about it,” he said. 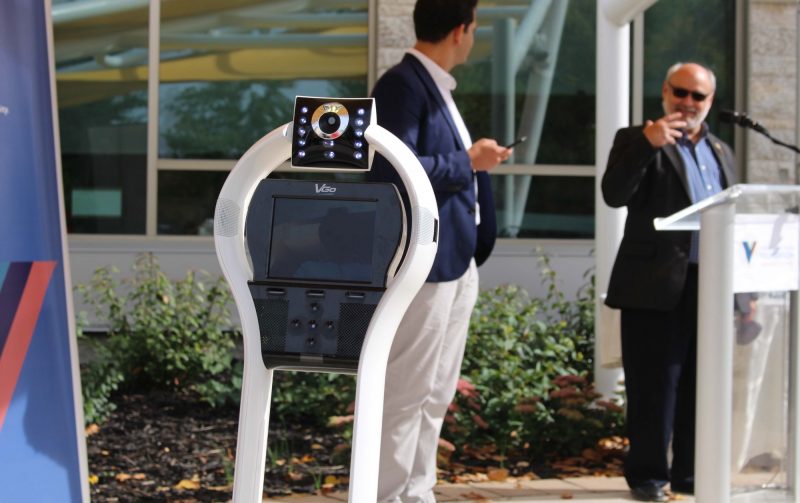 The college will be looking at different robots with different functions and capabilities over the two year project, with the goal of supplying 15 robots to VGHF.

“The ability to leverage capabilities and funding to support not just one but several health-related projects that advance [VGHF’s] research aspirations under one agreement is a great example of how this program can maximize benefits for Manitobans,” Sean McKay, interim CEO of Research Manitoba, said at the event.

Urbanowski noted that over the next two years, his research team will be supported by Alzheimer’s Society of Manitoba, Manitoba Association of Seniors Centres, UM faculty from rehabilitation sciences, computer science and business, and an international network of researchers, including some from the Netherlands and Switzerland.

“Over the next two years, with this robot or one like it, we will see how we can help people with dementia lead more meaningful and engaged lives in their community,” he said. “We have technology that we can use to be innovative in the way we reach out and support people.”

One comment on “College of Rehabilitation Sciences’ telepresence robots to assist people with dementia, caregivers”