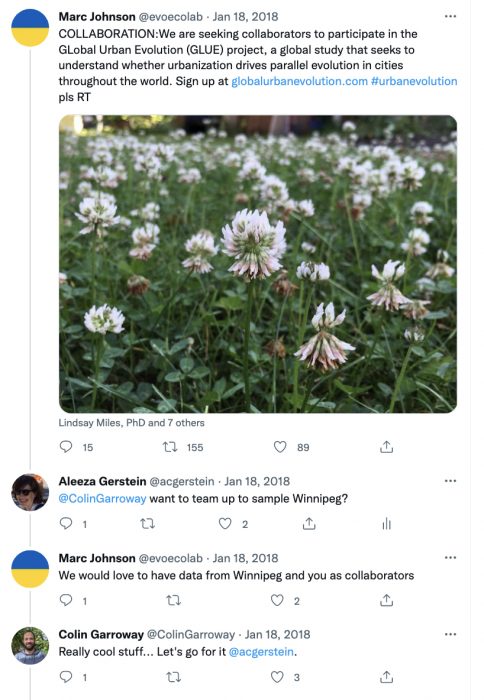 Evolutionary biologists Aleeza Gerstein and Colin Garroway (alongside undergraduate student Rebekah Kukurudz) in the University of Manitoba’s Faculty of Science eagerly responded to this query. They wanted to put Winnipeg on the map, and now their work is published in the latest edition of the journal Science. The University of Toronto Mississauga-led study shows cities are a powerful force driving the evolution of life across the globe.

The experiment was simple yet grand: In 160 cities across 26 countries, researchers took samples of white clover (Trifolium repens) starting in the middle of a city, and followed a straight line out of the city sampling until well into a rural area, testing each sample for hydrogen cyanide (HCN), an antiherbivore chemical defence that is also produced as a buffer against stresses such as drought. And the researchers found that urban clover typically produces less HCN than rural clover because they have adapted to arid cityscapes with few herbivores.

The findings demonstrate that cities are dramatically transforming environments in ways that alter the evolution of life. And cities—with their manufactured networks of concrete, compact soils and pollution—offer basically the same environment, and so the study found that these urban environments are putting selective pressure on clover across the globe. Such “parallel evolution” is a hallmark of natural selection because it suggests that adaptation proceeds in a repeatable way when populations face similar environments.

“A major question in biology is how predictable is evolution? And this is by far the largest study to ask that, and its answer is it’s predictable to some degree but not 100 per cent because there’s always many variables that influence trajectories” Gerstein says. 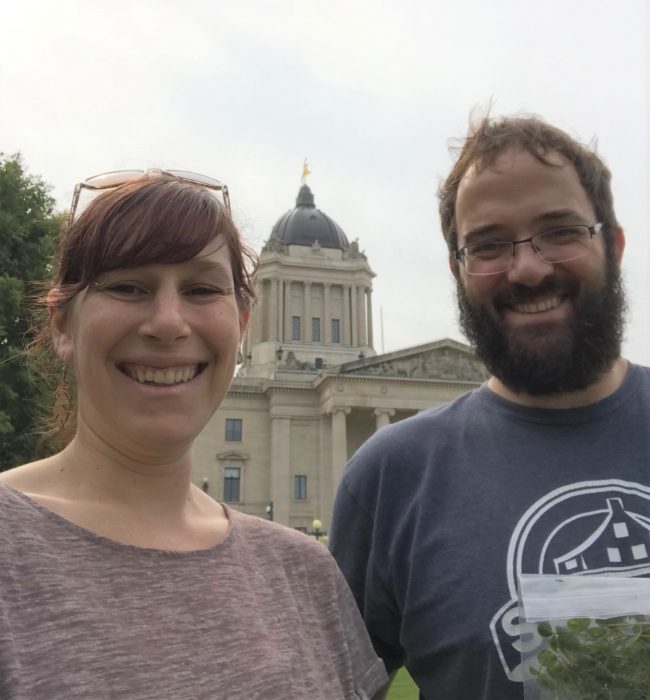 Aleeza Gerstein and Colin Garroway outside the Manitoba Legislature Building where they collected clover for the largest evolutionary field project undertaken.

For Gerstein and Garroway the findings tell a story that policymakers should pay attention to. Adaptation is taking place, and cities can be designed in ways that benefit species.

“We are so lucky in Winnipeg,” Gerstein says. “There are green spaces, minimum, every five kilometers through the heart of our city and we do not acknowledge this, take advantage of this, applaud this. And we need to conserve these spaces with every dying breath.”

This study builds on the previous work of Galloway’s lab, which looked at how cities impact species at the population-level when islands of urban greenspaces—which are better than nothing—lead to impoverished and thus fragile gene pools of the creatures residing in them.

“We’re having considerable negative impacts on wild populations. Stuff is happening and this latest study is helping us get a handle of the big picture around the world,” Garroway says.

The Global Urban Evolution Project (GLUE) examined white clover because it is one of the few organisms present in almost every city on Earth, providing a tool to understand how urban environments influence evolution. And for GLUE, this publication is just the beginning. Using the same techniques, collaborators collected more than 110,000 clover samples and have sequenced more than 2,500 clover genomes. It has created a massive dataset that will be studied for years to come, and has provided an invaluable baseline for future evolutionary studies.