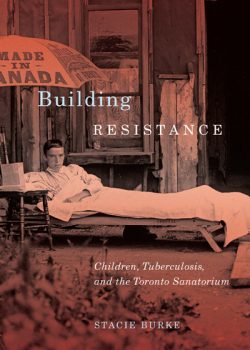 Building Resistance brilliantly explores the experiences of children with tuberculosis who were treated at the Toronto sanitarium in Weston from the hospital’s founding at the beginning of the twentieth century to the 1940s when antibiotics revolutionized the tuberculosis experience. The goal of the Toronto sanatorium was to build patients’ resistance to the then-common disease. The author takes an innovative “biosocial” perspective, making connections between tuberculosis bacteria and children’s experiences of the treatments provided by sanatorium staff. Readers are introduced to dozens of individual patients, some of whom tragically succumbed to the disease, and others who recovered. A large set of patient records makes possible Dr. Burke’s close and perceptive readings of the children’s experiences. The study succeeds in making intelligible to the general reader a wealth of medical science, while at the same time vividly and empathetically showing how the young patients were affected by the disease, its treatments, and the sanatorium.