Dr. Jon McGavock’s study tracked visitors to Winnipeg’s winter river trails over two years and revealed that 200,000 to 250,000 people visited the trails in the short 10-week period that it was open.

Dr. Jon McGavock was out for a run a few winters ago when he kept passing smiling people on a trail. Despite the cold, he noticed everyone seemed so happy. During that run he decided he had to study the impact of Winnipeg’s 10 km of frozen river trails.

So McGavock – an associate professor of pediatrics and child health, Max Rady College of Medicine, and also a researcher at The Children’s Hospital Research Institute of Manitoba – and his team set out to discover how many people use the winter waterway trails and the physical activity level of the trail users. He teamed up with The Forks and Winnipeg Trails on the project, which took place during the winters of 2017-18 and 2018-19.

McGavock, an avid winter runner and cyclist, sat down for an interview in the warmth of his office to talk about the study published last year in the International Journal of Environmental Research and Public Health and the keys to exercising outdoors when the temperatures plunge during the frigid winter months. 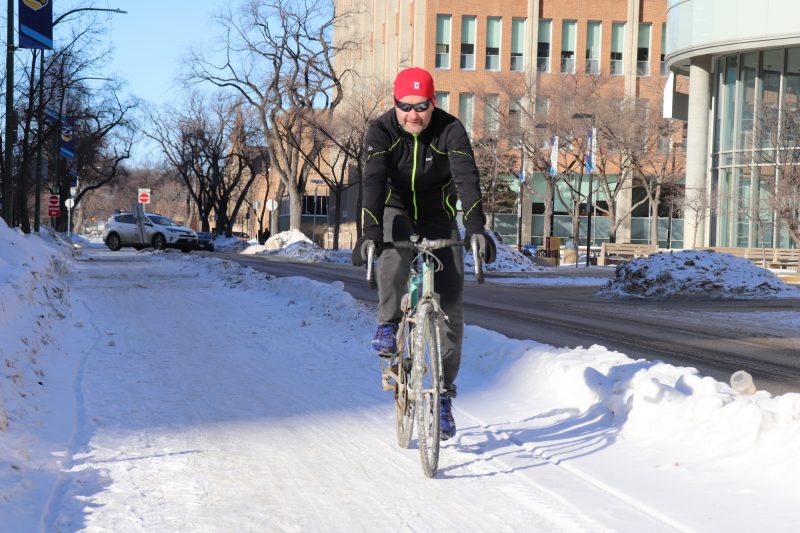 Dr. Jon McGavock said that people should not be afraid of getting outdoors and exercising in the winter. The associate professor of pediatrics and child health said it’s about layering the right way to stay warm and protect against frostbite.

What did the study find?

The study showed that the trail brought people outside in the winter deep freeze at levels we were not expecting. Tracking visitors to the winter trail over two years revealed that 200,000 to 250,000 people visited the river trails to skate, run, walk, bike or ski in the short 10-week period that the trail was open. These numbers are four fold higher than the months before and after the trail is open. We saw between 2,000 and 8,000 people using the river trail each day.

Out of the more than 450 people surveyed while they were on the trail, 40 per cent achieved the daily target of 30 minutes of physical activity and the average activity time per visit was around 25 minutes. We also looked at who was using the trail and found that 58 per cent were female, 73 per cent were 35 years or older, 77 per cent were Caucasian and 61 per cent had an income of more than $50,000.

What are the benefits of using the trail?

When we asked people what they perceived the major health benefits to be and almost everyone said they feel more physically fit because the trail is there. And importantly, people said that when they’re out there they feel better mentally. By and large people said they are feeling like this trail is giving some type of holistic benefit, not just, ‘I’m getting in my daily exercise.’ Rather they said ‘everything about this trail is making me feel better.’

Did anything surprise you about the results of the study?

The biggest surprise for me was when we tried to put into perspective how many people were using the trails. In those four months, we saw 200,000 to 250,000 people, which is a third of the city. When we compared those numbers with our summer data it was equivalent to summer months. The biggest numbers were on Louis Riel Day, which was similar to Canada Day, when we saw 10,000 people come out to use the trails. I just couldn’t believe the numbers. I thought June, July, August were going to be our peak months and this will get us somewhere close, but creating the river trail basically turned The Forks in January into The Forks in July. 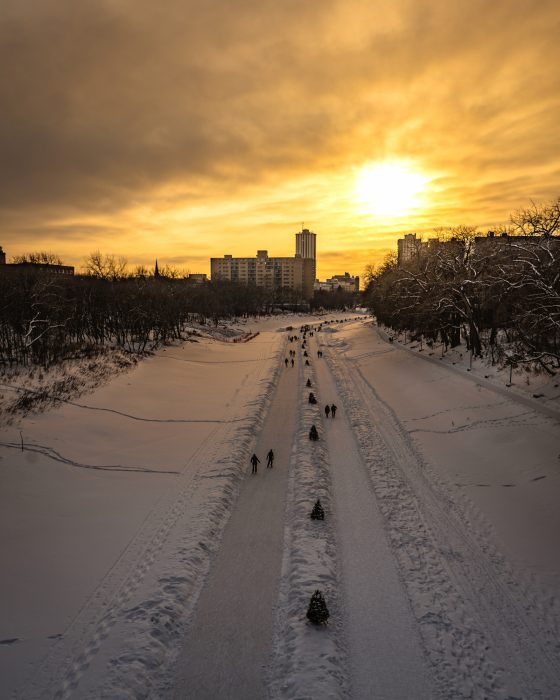 The study found that out of the more than 450 people surveyed, 40 per cent achieved the daily target of 30 minutes of physical activity while on the trails. The average activity time per visit was around 25 minutes.

What did the study conclude?

In conclusion, this was a very highly impactful population level intervention. To get people more physically active at a time when we know most people are not, and importantly, they were getting a dose of physical activity that we would associate with major health benefits. So on a population level this was for us one of the biggest winter specific population health interventions that we’ve ever seen and we’re hoping this is something we can try to replicate.

Because the river trails weren’t open this winter, what impact will that have on the city?

Just talking with people and reading comments on Twitter, I’m hearing from them that it’s a bummer. It’s tough not having the trails. It’s a really unique part of living in Winnipeg and a lot of people really love having it. I do feel like as the Jets are a part of our culture in the winter, so is this skating trail. So there’s a unique opportunity for us to figure out what do we do to try to study the impact of not having it.

What do you recommend people do to prepare to exercise outdoors in the winter?

The most important things are staying safe and layering the right way. Go to your local outfitter and talk to them about how you can keep your toes, fingers and face from frostbite. Don’t be afraid of getting out. It’s going to be cold the first little while but if you’re properly dressed and get moving it’s just a wonderful experience.

What can other cold-weather cities learn from your study?

This is a really unique opportunity for cities to take a look at what space they have. Cities are really committed to trying to create environments that support health to create healthier populations. The Scandinavians have been doing it a really long time. The trails come at a really low cost – you don’t have to build a bridge, you don’t have to lay down hundreds of kilometers of asphalt to just create something new and exciting.

If someone said to you that there is no way you could exercise outdoors in Winnipeg in the winter what would you tell them?

Come to Winnipeg in January and we’ll show you what you can do.