An exemplary skull of a gorgonopsian collected from Zambia in 2018 and currently at the Burke Museum of Natural History. The upper canine of this specimen is broken and would have extended below the lower jaw. | Photo credit: Brandon Peecook

When thinking of fierce predators of the past, it’s difficult not to imagine dinosaurs, considering theropods are well known for having blade-like teeth with serrated cutting edges used for biting and ripping their prey.

Click to Enlarge: A complete sabre-toothed canine from a gorgonopsian from Zambia. This specimen includes both the crown (top) and root (bottom) of the tooth. | Photo credit: Megan Whitney.

Next, one might imagine another creature – sabre-toothed cats – only they roamed the earth hundreds of millions of years later.

But, a team of researchers discovered a surprising connection between the two vastly different prehistoric animals. And yes, the similarity is in their teeth.

In a paper published in Biology Letters, Megan Whitney from Harvard University, Aaron LeBlanc from King’s College London, Ashley Reynolds from the University of Toronto, and Kirstin Brink from the University of Manitoba, examined thin slices of fossilized teeth belonging to a gorgonopsian, a large predatory animal that lived roughly 260 million years ago and resembled a cross between a dinosaur and a saber-toothed cat.

The research team discovered that gorgonopsians, which are early ancestors to mammals and not related to dinosaurs, have very similar tooth structure to carnivorous dinosaurs. Indeed, up until now, it was thought that the complex arrangement of tissues that enabled dinosaurs to have such murderous teeth was unique to them. Turns out, other creatures found a way to grow them too, and first. “When you compare a dinosaur tooth to a gorgonopsian tooth, they look pretty similar, like a blade with serrated edges on the front and back,” says Brink, an assistant professor in the Department of Geological Sciences in the Clayton H. Riddell Faculty of Environment, Earth, and Resources.

The team of researchers combined their expertise in paleohistology (the study of the microstructure of fossilized skeletal tissues) and examined thin sections of fossils from three synapsids—the group of animals the gorgonopsians belong to that are more closely related to mammals than reptiles on the tree of life—from three different time periods to test a theory of the structure of the serrations of their teeth.

“I was so sure that this somewhat complicated arrangement of tooth tissues in meat-eating dinosaurs was a character unique to dinosaurs that helped them become powerful predators in the Mesozoic period,” says Brink.

“The findings in this study show that this type of tooth actually evolved about 20 million years before dinosaurs did. This suggests that this particular tooth structure is very efficient for biting and ripping into meat, and is a great example of convergent evolution – how a character or feature that evolves in very distantly related groups because of a similar function in the environment, not because of shared heritage – in the synapsid lineage and the reptile lineage. This tooth type evolved first in the synapsid lineage and was convergently evolved in dinosaurs much later.” 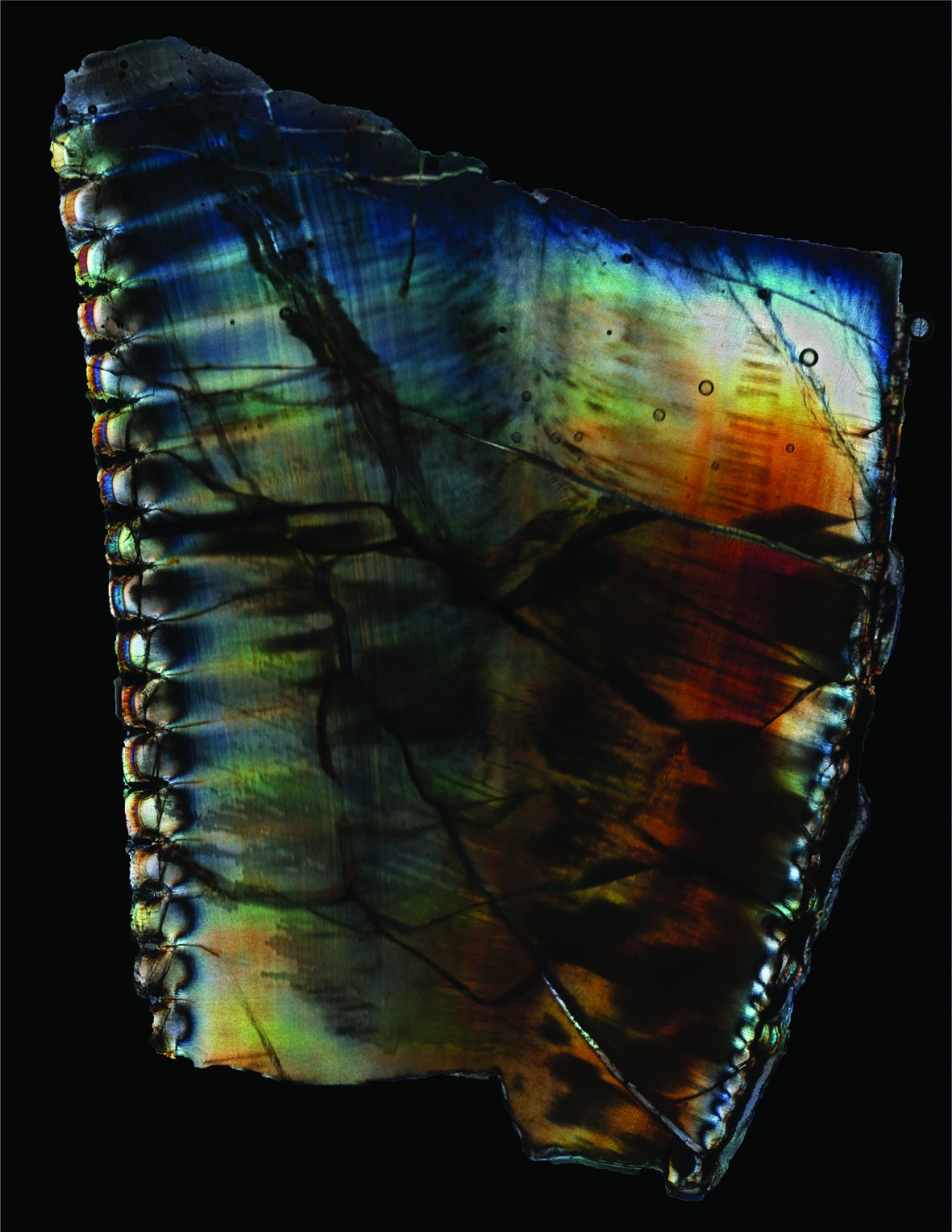 Click to enlarge: A thin section of a partial gorgonopsian canine under polarized light. Serrations are evident on the right side of this specimen. | Photo credit: Megan Whitney

In her previous work, Brink examined the internal microstructure (only visible with a microscope) of these serrations in dinosaurs to try and figure out how they develop, and if the microstructure could give clues to the function of the tooth. She found a unique arrangement of the tissues deep within the teeth of meat-eating dinosaurs, but not in other animals with serrated teeth like sharks, living lizards, plant-eating dinosaurs, sabre-tooth cats, or Dimetrodon, which is an even older ancestor of gorgonopsians in the synapsid lineage.

“I concluded in 2015 that this arrangement of tissues was only found in meat-eating dinosaurs, and helped to strengthen the serrations so that they wouldn’t get worn down or break while the dinosaur was eating its prey. This could have been one reason why meat-eating dinosaurs were so evolutionarily successful and dominated at the top of the food chain,” says Brink.

The discovery surprised everyone. It meant that this type of serrated, cutting tooth evolved first in the prehistoric animals that eventually evolved into mammals, and only later evolved independently in dinosaurs.

“The results of the study were pretty surprising since we thought these microstructures were features found only in dinosaur teeth. In fact, this unique arrangement of tissues that form the serrations evolved first in the ancient ancestors of mammals, which are not related to dinosaurs at all, and much older.”