Amirali Paknahad is a dentistry student who uses the Joe Doupe Recreation Centre, located at the University of Manitoba’s Bannatyne campus, with a group of his classmates.  The group, totalling between 10 and 15 dentistry students, use the gym and takes part in intramurals together on their off-time, and they have been taking a mirror selfie every time to document how the group has grown. Paknahad says that in-person conversations and peer support are key to getting people interested in fitness and utilizing facilities and services that are available to them. 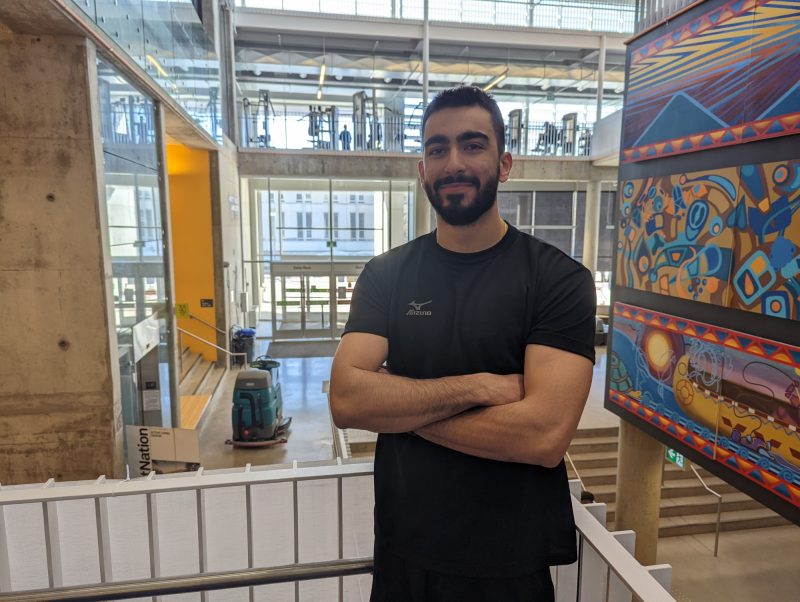 Tell me about who you use UM Recreation Services with and how that works?

I’m in first year dentistry, it’s called D1. We have a class of 28 or 29 students. There are quite a few athletes or people who are in fitness in our class, and obviously we ended up going to the gym. Everyone involved promoted it within the class, and now sometimes like half the class comes. After that point it was pretty cool because it almost looked like we had a class going on or something. People just came out, a lot of people started working out because of it. Now we just go after classes or before classes, whenever we have time. A few of us promote it. A lot of people are getting involved, starting out. Everyone’s really academic, obviously, but there’s been a growing interest in health and fitness. Even across every profession and all the faculties there’s been a growing interest. And I think because of that more people are willing to come out and try it. 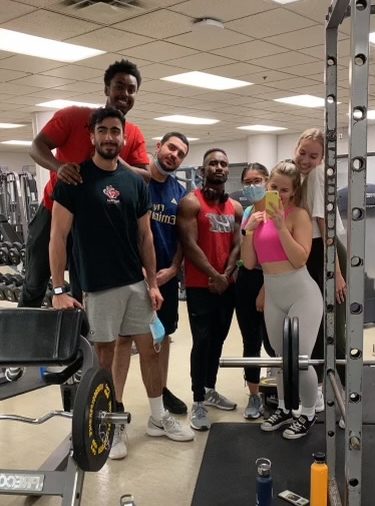 How many of you go to Joe Doupe at a time?

It depends on the day, but if I were to do some rough math there would be around 6 to 8 guys, and 4 to 8 girls, so if we all happened to go at the same time there would be a lot of us. We could get sometimes 10 in there, we could probably get 15 if we tried, and that’s a really big sample size of our class, that’s about 50 percent.

You mentioned there’s a growing interest in health and fitness across the university. How has the pandemic impacted people’s feelings, their need to get to the gym and the personal effort that it takes?

I think it’s been rough. It’s been rough for me, it’s been rough for a lot of my friends. A lot of people gained a lot of weight or lost a lot of weight or lost a lot of muscle, gained interest or lost interest because of the pandemic. And I went back to Toronto and it was completely locked down there and it was the first time in a while that I was completely shut out of health and fitness. So, I think because of that people are really eager to come out and play sports and work out and participate at Joe Doupe. I think for some people it’s helped them grow an interest to be involved with health and fitness because once you lose it you realize the value of it. And ever since it opened up people were waiting for that day and coming out and taking it more seriously. Whereas before it was always there, so it was easy to maybe ignore. I have some friends who picked it up because they were in lockdown, they had nothing else to do, they worked out at home. Now they’re into it and as things open up they’re eager to come out. And that’s been a lot more significant with intramurals because it’s tougher to run sports without masks. And when that opened up that was really exciting, for me too because it was a tough two years for sports. It was nice for us to get back on teams and play with each other.

How can UM Recreation Services encourage the community to come out and take advantage of our facilities, classes, and sports programs? 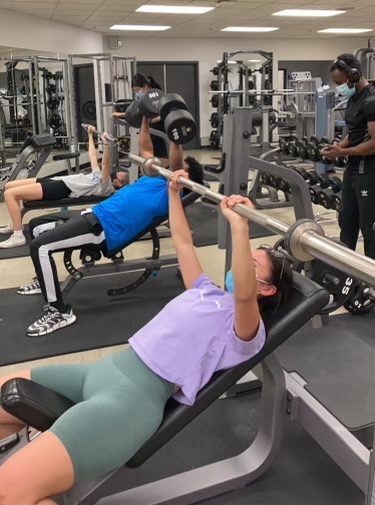 If I was talking to a friend who was trying to get into it, I’d explain to them the process, how easy it can be, how effective it can be, how fruitful, the dividends it can pay. That’s harder to communicate through Rec Services because you can’t have those one-on-one conversations. I guess if it can be more personable that might be the way to get people into it, that’s kind of how we do it. We have a lot of people who have been doing fitness for seven years, almost a decade, and having those conversations with someone who is starting out, it’s really heart-to-heart.

And knowing that it can be enjoyable. Or if you don’t like working out for too long, it can be just 20 minutes and that’s effective also. . . There are so many barriers for someone who is trying to come into fitness, and the more personable you can be the better it is

What would you say to someone who is nervous or hesitant about getting involved?

I would say do it. Definitely do it, it pays all the dividends. When you do something that’s difficult and outside of your comfort zone you become better for it, and that’s why it’s so fulfilling right away. If it was my friend I would want to say that it’s not as daunting as it may seem. You can do something you love, find the aspect you’re passionate about, that you enjoy, and enjoying it is the biggest thing because that will keep you coming back to the gym.

Find something that you love about it and let that drive you to come out each and every day—or whatever your plan is—because sticking to the routine and making it a part of your life is the best way to get involved consistently and make the changes that you want for yourself.

Are you a UM Recreation Services member or participant with your own story to tell? We are still looking for testimonials from individuals who use our services. If you are interested, please reach out to: kyle [dot] sokoloski [at] umanitoba [dot] ca