Photo of a polar bear (left) and a seastar from the Pterasteridae family (right).

Within the framework of the Southampton Island Marine Ecosystem Project (SIMEP, 2018 and 2019 oceanographic research cruises aboard the RV William Kennedy), led by C.J. Mundy, and additional government-and university-based sample collections driven by D.J. Yurkowski, R. Amiraux and collaborators investigated 1580 samples of the wildlife around Southampton Island, Hudson Bay, Nunavut. Th RV William Kennedy is part of the Churchill Marine Observatory and is owned and operated by the Arctic Research Foundation (ARF) under the auspices of an UM-ARF agreement.

“The objective of the SIMEP project was to better understand the structure and function of the Southampton Island marine ecosystem that will help local through national governing bodies and organizations decide on how to best conserve and protect this important marine environment, currently an Area of Interest under consideration to become a Marine Protected Area” explains C.J. Mundy, Associate Professor at UM

Food webs are a central concept in ecology that has provided considerable insight into ecosystem functioning. At the base of the food web, primary producers support lower trophic levels (i.e., feeding positions in a food web) that transfer the energy up to top predators. Generally, the trophic structure of organisms floating or swimming in the seawater, called pelagic organisms that include phytoplankton, invertebrates, fishes, and marine mammals, are studied extensively, whereas those inhabiting the seafloor, called benthic organisms, are studied much less often and typically assumed to only consist of a truncated food chain with lower trophic level species such as mollusks and sponges. R. Amiraux and collaborators refuted this assumption, showing that organisms inhabiting the ocean floor can have all the constituents of a complete trophic chain, i.e., primary producers fueling several trophic levels from herbivores to predators, with notably the presence of a top predator: seastars (Figure 2). 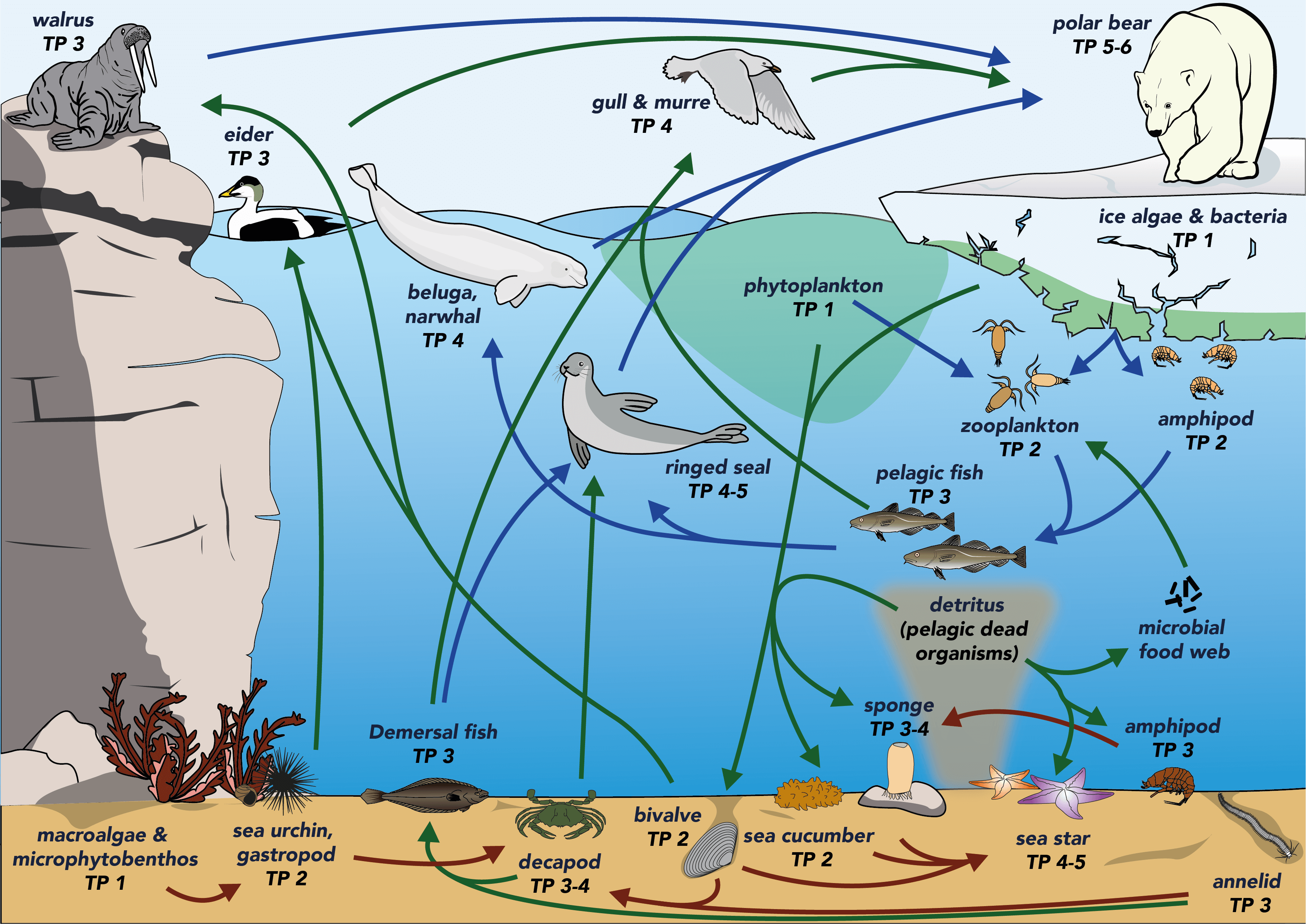 Around Southampton Island, Amiraux and collaborators observed a great diversity of seastars occupying various ecological niches. However, only the Pterasteridae family contained top predators (Figure 1). The authors argue that this family thrive as top predators due to their evolved defense mechanism associated with a diet of other predators, including marine mammal carcasses that settle onto the ocean floor. However, members of the Pterasteridae family of seastars are present in all of the World’s oceans where they exert a predatory influence on the local ecosystem. Therefore, it is likely that this family of seastars is the top predator of much of the World’s ocean floor. Consequently, if in the Arctic these sea stars are the benthic top predator counterpart to the polar bear, it is likely that they are also the benthic top predator counterpart in other oceans of the world where different pelagic top predators are prevalent, e.g., Orca, Shark, etc.

The presence of top benthic predators is not insignificant and can have a great impact on the functioning of our ecosystems. For example, if the top predator seastars were to increase predation on the bivalves, i.e., clams, that walruses feed on, we can expect a decrease in the stock of bivalves with effects propagating to the pelagic compartment on the walrus stocks, and in turn, cascading up to polar bears. This explains the numerous studies highlighting the worldwide deleterious effect of bottom trawling of benthic species on the pelagic subweb and strongly suggests that marine conservation initiatives should not overlook the benthic compartment.

A fresh approach to a salty problem