The Churchill Marine Observatory (CMO) is located adjacent to Canada’s only Arctic deep-water port, which will allow researchers access to marine and Arctic life like never before. // Photo from CMO

Hudson Bay, considered a marginal sea of the Arctic Ocean, is changing rapidly. Local communities report that their traditional routes for travelling and hunting are disrupted due to the loss of sea ice, and that they encounter fish and marine mammals that are new to this habitat. Locals are also concerned about an increase in shipping and exploration.

A closer look at this ecosystem can provide valuable answers, not only for designing local interventions but also for understanding what a warming climate might mean for the planet, suggests David Barber, professor and Canada Research Chair (CRC) in Arctic-System Science at the Centre for Earth Observation Science (CEOS) at the University of Manitoba (UM).

Studying “the changing sea ice environment requires new and innovative facilities, techniques and approaches,” says Dr. Barber, who leads a new facility, the Churchill Marine Observatory (CMO). “It’s located adjacent to Canada’s only Arctic deep-water port, which will allow researchers access to marine and Arctic life like never before. Our group is working to understand Canada’s often overlooked third ocean. How do we manage it? How do we prepare for the changes happening there? How do we get our policies and procedures in place?”

Gary Stern, board co-chair of the CMO and lead of the GENICE project, studies the transport of contaminants through Arctic marine and freshwater ecosystems. “As we lose sea ice, there is more and more ship traffic,” he says. “Local communities are concerned about this commercial activity, which brings challenges for the marine food web, such as ship noise and potential oil spills.”

Mechanical oil recovery efforts, which may be effective in warmer climates, are hampered by the presence of sea ice, so Dr. Stern is looking at alternative approaches that take the seasonal change in temperature of the ice and the potential of microbial degradation into account.

“The idea is to study which microbes are present – and the types of ice where they are predominant – as well as under what conditions these microbes have a better chance of degrading the oil,” he said. 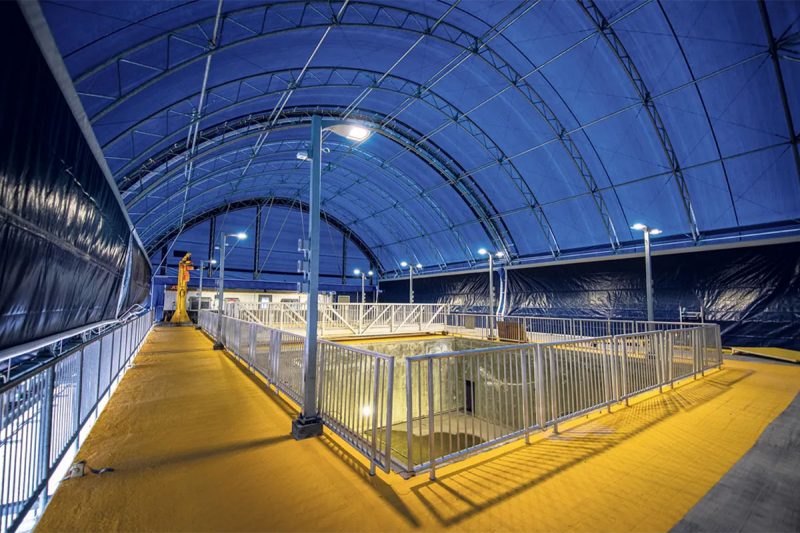 At the Churchill Marine Observatory (CMO), researchers find ways to respond to a changing environment. // Image from CMO

“As the Arctic is getting more accessible, both in terms of marine transportation and resource development, we are facing imminent threats and opportunities,” he says. “While communities are interested in developments that improve their socio-economic situation, change is happening so fast that many worry how this will affect their way of living.”

The CMO’s Ocean-Sea Ice Mesocosm (OSIM) will provide answers about the detection, fate, modelling and response techniques for crude oil and other transport-related contaminants, Dr. Wang says. “[OSIM] consists of two outdoor covered pools that can accommodate controlled experiments on various scenarios for marine and freshwater environments. We can pump water from surrounding sources into the tanks, and this allows us to emulate field experiments, albeit with greater control.”

Researchers can gain insights on geophysical and biogeochemical processes across the ocean-sea ice-atmosphere interface and freshwater-marine coupling, and Dr. Wang envisions this to spur “development of new technologies that help to respond to some of the challenges.”

In addition to OSIM, the CMO has an “Environmental Observing (EO) System, which consists of a series of automated instruments located across Hudson Bay,” says Dr. Barber. “This provides us with real-time data for monitoring changes as they occur and to set conditions in our OSIM experiments.”

Designed to operate for about 50 years, the EO will accumulate a significant amount of data about “the impacts of humans on the system, including what happens when hydrocarbons or other contaminants are spilled,” he says. “It will also allow us to study extreme weather and climate change effects regionally and nationally.”

As chief scientist of the EO, CJ Mundy emphasizes the importance of oceanographic research in Canada’s North, which draws on data from the automated instruments as well as the RV William Kennedy, Canada’s first research vessel dedicated exclusively to this region. It is operated – in partnership with the Arctic Research Foundation – during the summer months and has enabled a number of initiatives, including community-based projects around Hudson Bay.

A shift in focus – from deep water to the coastal areas – has revealed the region to be more productive than previously thought, says Dr. Mundy, who studies phytoplankton, ice algae and kelp. “There is a lot of production feeding marine life. The summer beluga whale population is estimated at more than 50,000 in southwestern Hudson Bay alone, and other marine mammals in the bay include polar bears, bowhead whales, seals and walruses.”

Yet what does a changing climate mean for species adapted to cold water? Dr. Mundy believes they will face pressure from newcomers to the region, since increasing temperature and less sea ice could lead to a shift in seasonal production regimes at the detriment of highly adapted Arctic marine species. “New information can help us understand how this system works,” he says, “and what is likely to happen as temperatures continue to change.”

Implications of this kind of research go far beyond local communities in Hudson Bay, adds Dr. Barber. “The CMO is focused on climate change and how these changes, which are so obvious in the North, are connected to what is happening across the planet. Better understanding can help us inform the public and hopefully guide industry practices and policy toward better outcomes.”

This story was originally published in November 2021, as part of the ‘Excellence in Research and Innovation’ feature in The Globe and Mail that marked the Canadian Foundation for Innovation’s 25th anniversary