Carmine Slipski was both terrified and intrigued when he saw the film Outbreak as a child. The 1995 movie about an Ebola-like virus captured his imagination and ignited his interest in infectious diseases. His path was set.

Slipski is now a fourth-year PhD student in the department of medical microbiology and infectious diseases, Max Rady College of Medicine, Rady Faculty of Health Sciences. He is currently researching antimicrobial resistance mechanisms in bacteria like E. coli.

“Many students will say ‘oh, I read Richard Preston’s The Hot Zone, or I saw a particular movie and it really made me interested in infectious diseases and that’s what I want to do,’” Fowke said. “So having popular culture highlight epidemics has really raised awareness for our students.”

Slipski said he was fascinated by the idea that something you couldn’t see could have a deadly effect. “I think it’s that sort of excitement in the things we fear kind of excite us the most, that’s why Shark Week is so popular,” he said. “It’s the same thing with microorganisms. These things we don’t fully understand, but are also terrifying, intrigue us.”

Although movies sometimes get the science wrong, Fowke said it’s great that young people are discovering microbiology and infectious diseases through pop culture. He said that students also gravitate towards his department because they see news coverage about disease epidemics that researchers in the department study—from Ebola to HIV to SARS.

While it was a movie that was Slipski’s entry point, he said it was the department of medical microbiology and infectious diseases’ reputation that led him to do his master’s and PhD at the University of Manitoba.

“I think it’s a great department because of the resources we have available to use here in the city,” he said. “Having the level four National Microbiology Laboratory and all those things available just makes it a great hub to study and we have the resources to do it.”

Ongoing research includes work by Dr. Jason Kindrachuk, Canada Research Chair in molecular pathogenesis of emerging and re-emerging viruses and assistant professor, MMID, who is trying to determine how Ebola viruses are transmitted in the semen of infected men even after they’ve recovered from infection.

Another researcher, Dr. Denice Bay, assistant professor, MMID, is studying antimicrobial resistance in bacteria and how they fight off antibiotics.

Fowke is researching the use of anti-inflammatory medications like Aspirin to prevent new HIV infections. His team recently received $2 million in funding from the Canadian Institutes of Health Research (CIHR). Dr. Adam Burgener, associate professor, MMID, also received $2 million from CIHR to investigate how the microbiome in the human body interacts with vaccines and anti-retroviral drugs against HIV. 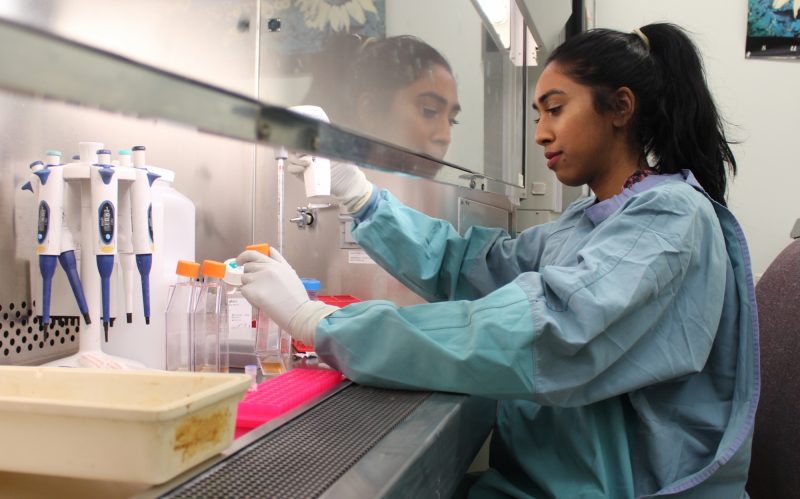 Shifa Mohideen, a summer student in Fowke’s lab who is entering the first year of her master’s, became interested in HIV research after watching a documentary on YouTube when she was in middle school.

Shifa Mohideen, a summer student in Fowke’s lab who is entering the first year of her master’s, was attracted to the department because of its HIV research program.

“You always hear about the U of M within the headlines spearheading HIV research, not just nationally, but globally, and it’s always something I wanted to be a part of because of the great humanitarian aspect that involves HIV research,” she said.

It wasn’t a fictional film or something in traditional media that attracted Mohideen to the field, but rather a documentary she saw on social media. “It’s interesting how much of the information we take in these days within this generation is greatly accessed through social media, and had I not gotten a YouTube recommendation for a documentary when I was just a pre-teen in middle school, I wouldn’t have come across such an amazing movement,” she said.

Now that Slipski is a scientist, he approaches Outbreak from a different perspective than he did when he was a child. When he re-watches the movie, he can pick it apart for its inaccuracies, but he said it’s even more real for him now.

“I now understand the breadth of the risk with these diseases,” he said. “I also understand that even though things like Ebola, which are very scary and have affected many people in recent years, the underlying diseases like influenza still kills half a million people every year, but yet we just think of it as commonplace and the general population doesn’t really fear those types of pathogens, which are much more relevant and dangerous, but yet they fear the ones that have those severe acute consequences.”

The Rady Faculty of Health Sciences is calling on senior students and residents across its five colleges in an effort to support the health-care workforces of First Nations communities.