Indigenous health care will be transformed in the coming years as First Nations, Métis and Inuit people take charge of their own health services.

That’s the future foreseen by Ovide Mercredi in his passionate keynote address at a Rady Faculty of Health Sciences gala on Jan. 24.

“The authority over health will be with our people, under their own governance systems and structures,” the Indigenous rights advocate told the audience of 400.

“Are you ready for that? It’s coming,” said the UM-educated lawyer and former national chief of the Assembly of First Nations.

“The idea is to bring the power back to the people.… When you give people their human right to make decisions for themselves, they will make the right decisions.”

The gala at the Fairmont Winnipeg marked the 50th anniversary of the U of M’s northern medical unit, which is now called Ongomiizwin – Health Services.

The celebration honoured the many Elders, health professionals, staff, and government and community partners who have collaborated to provide health care in Indigenous communities in northern Manitoba and Nunavut.

Mercredi, former chief of his home community of Misipawistik Cree Nation in Manitoba, received an honorary doctorate from the U of M in 2018. He currently works for Nishnawbe Aski Nation in Ontario in the area of health transformation.

He said Indigenous people want to be cared for by Indigenous professionals. “U of M has graduated many doctors of Indigenous background, but we need more.”

Sounding the central theme of the evening, Mercredi called on non-Indigenous health professionals to work in partnership with Indigenous communities as they move toward health-care self-determination.

The U of M launched the northern unit in 1969 as an outreach program to provide medical services to a few isolated communities in northern Manitoba and what is now Nunavut.

Speakers noted that the unit’s visionary founder, Dr. J.A. (Jack) Hildes, was committed to partnering with communities and to a “triad” model to facilitate clinical services, health professional education and research in the North.

“The idea that a university could use its resources for a non-traditional, service-based approach was novel,” recalled Dr. Brian Postl, dean of the Rady Faculty, who has been involved with the health unit for 47 years.

The concept was rooted in recognizing local needs and social injustice while delivering quality care, Postl said. “It was all based on community engagement.”

Levinia Brown, an Inuit Elder and former deputy premier of Nunavut, is a former nurse who recalled being hired by Hildes in the early 1970s in Churchill, Man. She spoke of the importance of health-care providers being part of the community. “When you had retention of nurses and doctors, the community seemed to do well health-wise,” she said.

Over the decades, as the program expanded and was named the J. A. Hildes Northern Medical Unit, thousands of U of M-affiliated doctors, students and researchers gained experience in the North. The university emerged as a global leader in the field of Indigenous and circumpolar health care.

In 2017, the medical unit joined with U of M units responsible for Indigenous health education and Indigenous health research to form the three-branch Ongomiizwin, the Indigenous Institute of Health and Healing in the Rady Faculty of Health Sciences. “Ongomiizwin” is an Anishinaabe word meaning “Clearing a path for generations to come.”

Ongomiizwin – Health Services continues to serve and work collaboratively with 30 communities in Manitoba and Nunavut. 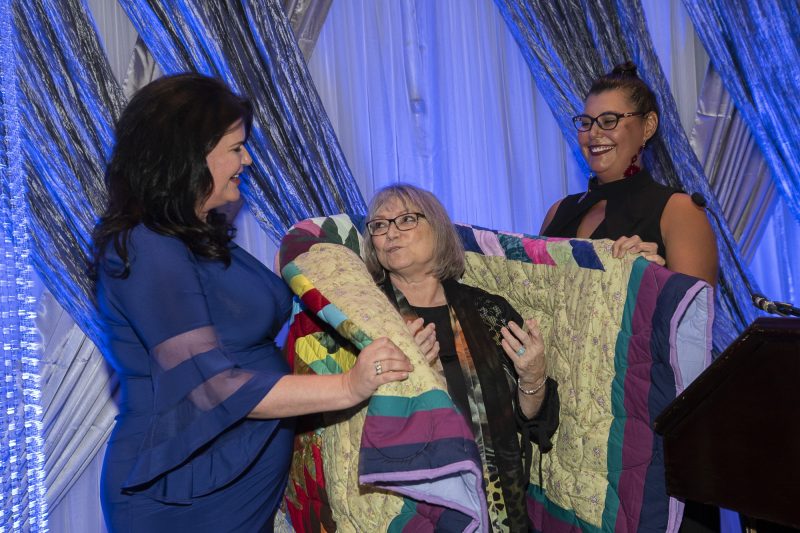 Three key figures in the leadership of Ongomiizwin took the stage to conclude the gala: Melanie MacKinnon, a Cree nurse who is the newly appointed head of Ongomiizwin; Dr. Marcia Anderson, a Cree-Anishinaabe physician who is now vice-dean, Indigenous health of the Rady Faculty; and Dr. Catherine Cook, an influential Métis physician who previously led Ongomiizwin and has recently been appointed the U of M’s inaugural vice-president (Indigenous).

“The University of Manitoba has a significant role in relation to the development of an Indigenous health workforce,” MacKinnon said in a U of M video that was created to mark the 50th anniversary. “Other universities … are watching what we’re doing.”

MacKinnon and Anderson presented a star blanket to their mentor, Cook. “We really wanted to honour all the paths she cleared for us,” Anderson said.

Cook said with gratitude that starting her career with the northern unit gave her the foundation for everything she has achieved.

“Everybody talks about the future of health care … and how it’s time that we had equity for Indigenous people,” Cook said. “I’m convinced that this is the time.”

The gala raised more than $50,000 for the 50th anniversary legacy fund established by Ongomiizwin – Health Services. The fund, which is still accepting donations, will support opportunities for Indigenous people to enter careers in the health sciences.

On September 29, hundreds of Rady Faculty of Health Sciences students, staff and faculty will observe the National Day for Truth and Reconciliation on Bannatyne and Fort Gary campuses honouring residential school survivors, acknowledging systemic racism in the health care system and the important role health-care professionals play in providing equitable mental, physical and emotional health care to every patient.