On the passing of Dr. Louis Fortier

It is with profound sadness and a heavy heart that we announce the passing of Louis Fortier on Sunday, October 4, 2020, following complications from acute leukemia. 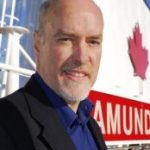 For over 30 years, Louis dedicated his life and career to place Canada at the forefront of Arctic research. A Canada Research Chair holder and professor at Université Laval, he was a tireless promoter of international multidisciplinary cooperation and spearheaded the development of some of the largest Arctic research programs in Canada and internationally, including the Canadian Arctic Shelf Exchange Study (CASES), the Canadian research icebreaker CCGS Amundsen, the ArcticNet Network Centres of Excellence and the Institut nordique du Québec. His endeavours have allowed hundreds of students, professors and research staff from Canada and abroad to establish or further their careers and lead the way in our understanding of the changing Arctic environment and its impact on humans and their health.

Louis was a key collaborator of the UM Centre for Earth Observation Science (CEOS) starting in the mid 1990’s. Dr. Fortier led a long and productive partnership between Laval and UM including design and production of the NGCC Amundsen, the IPY-CFL project, the Churchill Marine Observatory (CMO), ArcticNet and the Hudson Bay BaySys project (joint with Manitoba Hydro). Louis received an honorary degree from the UM (2007) to recognize his outstanding leadership in Arctic Marine Science and his strong integration with the University of Manitoba.

His extraordinary accomplishments and contributions have been recognized with the highest prizes and honours, including the Order of Canada, l’Ordre national du Québec, the Governor General’s Northern Medal and the Weston Family Prize for Lifetime Achievement in Northern Research.

Louis will be remembered for his passion, vision, dedication, drive, and contagious energy that spread to all who worked closely with him. The Arctic research community has lost one of its titans. He will be deeply missed.

A fresh approach to a salty problem

Dorthe Dahl-Jensen has received the Balzan Prize, the Carlsberg Foundation Research Prize and been named a Fellow of the American Geophysical Union in 2022.