Students in the College of Nursing, Rady Faculty of Health Sciences have a new high-tech way to learn this year, with the addition of immersive virtual reality (VR) to their curriculum.

The college opened two VR learning rooms with a total of 11 workstations at the Helen Glass Centre for Nursing in September.

Kimberly Workum, director of the Clinical Competence Assessment Centre and digital strategy at the College of Nursing, said VR learning has been a vision of the college for several years, but the COVID pandemic played a role fast-tracking the platform, as it gives a more immersive learning experience than other virtual learning tools.

“If another pandemic or some other reason comes up that we can’t do in-person clinical, this could be done remotely if students have their own VR headsets,” Workum said.

Workum led the team that developed the program, which uses technology from UbiSim, a Montreal-based VR firm. Many of the learning scenarios that were used to launch the VR program were provided by UbiSim. But Jeanne San Miguel, simulation facilitator and content developer from the College of Nursing, has developed and implemented several new VR scenarios and is currently converting many of the college’s existing simulation scenarios into VR as well.

San Miguel said students were immediately excited about learning in the virtual environments.

“The cohorts going through this term, because of COVID, have never done in-person simulation,” San Miguel said.

While studying at home, students used virtual simulation (v-sims), which was similar to desktop computer games.

“This has some similar elements as the v-sims, but it’s a completely different experience because you see a patient in front of you, as if you are at the bedside.”

The program is being used in conjunction with existing simulation platforms in the college that use lifelike manikins or standardized patients.

“The VR is more clinical, judgement and critical-thinking based, rather than performing physical skills,” San Miguel said. 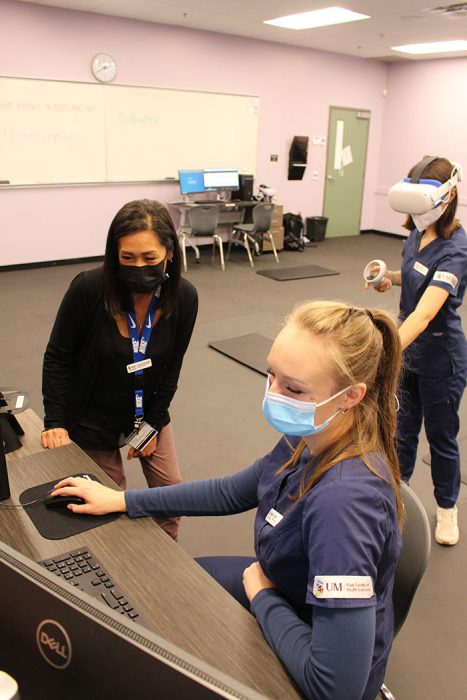 In the platform, students work together in pairs, with one student as an “active player” and another as a “driver.” The active player wears a VR headset and hand controls and acts as a bedside nurse, caring for a patient in one of several pre-programmed scenarios, while the driver lets the nurse know what the patient needs and acts as the patient by selecting the appropriate pre-recorded responses.

The active player is completely immersed in the 3D world. The patients – and sometimes family members – watch them closely and talk to them, sometimes with amplified intensity depending on the scenario.

Third-year student Morgan Sawchyn said the biggest advantage over v-sims is the ability to multi-task, like a nurse would in a real-life setting.

“You also speak instead of selecting a predetermined response, so you talk the way you actually would in clinical practice,” she said.

Sawchyn’s first scenario in the platform involved a patient who had overdosed on opioid pain medication.

“I had to provide care, give him a reversal agent, give him oxygen and make sure he doesn’t suffer negative consequences. But his daughter was also in the room, so I had to educate her on why she can’t take in medication from home, all while providing empathetic communication,” she said. “It’s very realistic.”

College of Nursing dean Dr. Netha Dyck said the college has spent $50,000 on the VR initiative, with funding provided by a donation from Dr. Ernest Rady. In 2016, Ernest and Evelyn Rady, through the Rady Family Foundation, committed an unprecedented $30 million to UM to support the Rady Faculty of Health Sciences.

“Virtual reality provides a highly engaging learning experience and a powerful way for our students to acquire their clinical practice, communication and critical thinking skills,” Dyck said. “Our students are excited to have the opportunity to develop their skills in this immersive and safe environment.”