Stephan Miller demonstrates how to use a stethoscope in one of the videos produced for students taking part in the CanU programs.

Despite having to take an entirely new approach, a team of volunteer students from the College of Nursing, Rady Faculty of Health Sciences, welcomed nearly 80 youth from across the city to explore nursing careers as part of the CanU Inspire and Explore programs this past fall and winter.

CanU is a charitable organization that empowers Winnipeg youth from low socio-economic backgrounds to explore various careers in programs designed and led by post-secondary student volunteers who are honing their leadership and community service skills. The Inspire program is targeted at students in Grades 5 – 6, while the Explore program is for those in Grades 7 – 8.

The College of Nursing has been working with the organization since 2014, usually bringing students on campus for demonstrations and hands-on workshops to learn skills such as wound care, vital signs, moving and transferring patients with wheelchairs or crutches, and caring for infants.

Due to the COVID-19 pandemic, the College of Nursing team led by third-and fourth-year nursing students Mikaela Canda and Stephan Miller had to find an innovative way to interact with students in a virtual environment during sessions scheduled for November and January.

“We still need to teach kids about nursing and show them how fun it can be and how fulfilling it is. I want to inspire them to go into the program, especially in this time when there is a great demand for nurses,” Canda said. 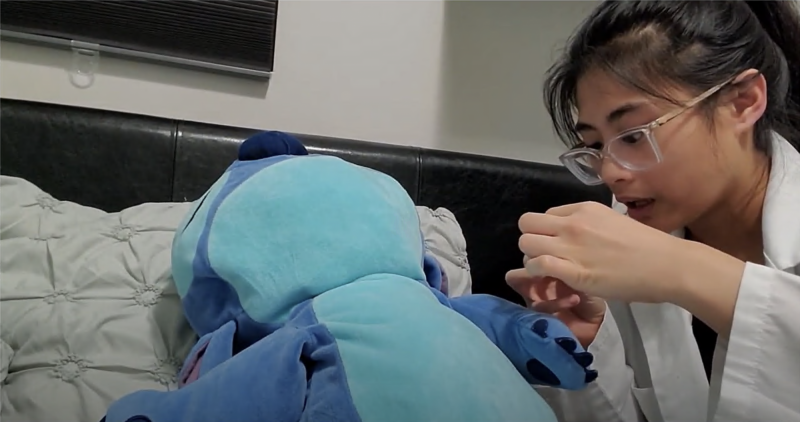 Mikaela Canda puts a bandage on her “patient” in a video demo.

In September, Canda and Miller met with the College of Nursing faculty advisor Sufia Turner to brainstorm alternatives, deciding on interactive workbooks that could be done with students over video conferences, and pre-recorded video demonstrations that showcase the skills they would normally perform in an interactive setting.

Canda and Miller recruited a team of 10 volunteers to help write and design the workbooks, provide demonstrations and record and edit the videos.

“We thought, especially with the younger kids, we can’t just give them a book with a bunch of words and pictures and expect them to be engaged, so we tried to make it as interactive as possible,” Miller said.

The video for Grades 5 – 6 students shows how to do medication calculations, proper hand hygiene, bedside safety checks, vital signs and simple wound care, as well as a demonstration on lung sounds, using sound effects to show what to listen for with a stethoscope.

The lung sounds demo is also featured in the video for Grades 7 – 8, along with sections on intramuscular injection, gauze roll application and pain assessment.

Canda and Miller said organizing volunteers for a completely new way of delivering the material was their biggest challenge.

“It was difficult to split the workload equally between each volunteer, but there were some advantages to working in an online format, given all the resources we have gotten used to this past year, like Zoom and Google Docs,” Miller said.

Turner said the response from CanU, teachers and students was overwhelmingly positive. Depending on how things go with COVID over the next few months, the resources could be used again next fall.

“In the face of a pandemic, these nursing students showed so much resiliency, strength and creativity. I’m very impressed at how they were able to adapt so well and create this amazing product for these young CanU students,” Turner said.