Artist Blake Angeconeb stands in front of the mural he painted in the Brodie Centre atrium at the University of Manitoba’s Bannatyne campus.

Blake Angeconeb looked up towards the brightly coloured mural he painted and a smile crossed his face.

“I’m super happy with it,” the artist said. “I’m excited it’s in such a place like this too, at the University of Manitoba.”

Angeconeb, who is Anishinaabe and a member of Lac Seul First Nation in northwestern Ontario, painted a stunning mural in the Brodie Centre atrium at UM’s Bannatyne campus. The mural was commissioned by EleV, a Mastercard Foundation program, in partnership with UM.

Angeconeb stood below the untitled mural and explained its symbolism: At the bottom of the mural are little birds starting their journeys, and above them are three face figures that represent everyone. In the middle, the main thunderbird, with outstretched wings, offers the other birds guidance. Along the top are smaller thunderbirds, which represent the teachings, and are on their own journeys.

While Angeconeb spoke with ease about the elements of the mural, painting it was a bit of a challenge. While he normally uses a lift to paint his murals, this artwork required scaffolding. Parts of the mural forced him to paint on his hands and knees, reaching out to stroke layers of paint. He also had to paint around four windows.

“I’m proud of how it turned out,” said Angeconeb, who now calls Winnipeg home. This is his first mural in the city.

With more than 17,000 followers on Instagram, Angeconeb has become known for combining the woodlands style of painting with pop culture references. He’s been commissioned to create everything from a Google Doodle to a massive mural at TikTok’s Canadian headquarters. 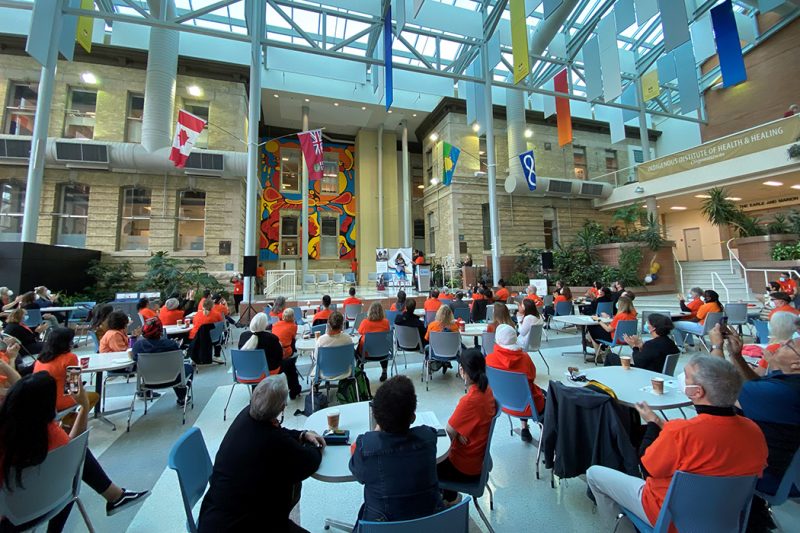 Blake Angeconeb’s mural in the Brodie Centre atrium at the Bannatyne campus was officially unveiled on Sept. 29 at Ongomiizwin – Indigenous Institute of Health and Healing’s event to mark the National Day for Truth and Reconciliation.

Angeconeb’s Bannatyne campus artwork was officially unveiled on Sept. 29 at Ongomiizwin – Indigenous Institute of Health and Healing’s event to mark the National Day for Truth and Reconciliation. The audience clapped loudly when the veil was dropped.

Dr. Marcia Anderson, vice-dean, Indigenous health, social justice and anti-racism, told the audience that they had several options for where the mural could have been located on the Bannatyne campus, but the Brodie Centre atrium represents the heart of the faculty.

“The university has always been described as having three pillars – research, education and service, but in the spirit of reconciliation, of a renewed relationship of recognizing this institution’s place on our homelands, we really need to understand that the heart of what we do – our foundation is Indigenous lands, relationships with Indigenous peoples, incorporation of Indigenous languages and of health and healing too. So that is why we chose this location,” Anderson said.

Debra Beach Ducharme, director of Indigenous health integration, Ongomiizwin – Education, read a statement at the unveiling on behalf of Jennifer Brennan, director of Canadian programs for the MasterCard Foundation.

“We are inspired by the way Anishinaabe artist Blake Angeconeb has brought the Indigenous youths’ perspectives to life through art in this mural and showcase how Indigenous youths and all of us must take flight together to make our vision a reality,” Beach Durcharme said on behalf of Brennan.

A partnership between the University of Manitoba and Mastercard Foundation’s EleV program officially launched today at the Fort Garry campus. This partnership was created with the goal of increasing Indigenous student outcomes and working with communities to bring post-secondary opportunities home to Indigenous learners.

The national launch of EleV’s Taking Flight Together campaign takes place on Oct. 26 with a program on APTN.

“I hope this mural will inspire people and bring them joy,” Angeconeb said. “I hope it will brighten their day when they see it.”