For 10 per cent of asthma sufferers, conventional treatments don’t work. Hadeesha Piyadasa [B.Sc./12] hopes that will change someday thanks to a new peptide-based drug he is studying that has shown promising results in improving breathing capacity and reducing inflammation in the lungs in a pre-clinical mouse model of allergic asthma.

Piyadasa, a PhD student in the Max Rady College of Medicine’s department of immunology, is getting ready to defend his thesis this fall. He wasn’t always certain that research was the path he wanted to go down, but he acquired a taste for it after hands-on experience during a stint as an undergraduate research assistant in Dr. Joe O’Neil’s biochemistry lab.

Piyadasa started his master’s degree in 2012 in Dr. Neeloffer Mookherjee’s lab at the Manitoba Centre for Proteomics and Systems Biology, studying inflammation in the lungs. After two years, Piyadasa decided to transfer into the PhD program.

Seven years later, he still feels amazement at the mysterious workings of the immune system.

“It’s such a cool topic. How are you not sick all the time with all the germs and viruses floating around?” Piyadasa says, “The immune system is so complicated. The more you study it the more you think, ‘how are we still alive?’”

The first part of his project was to study the immune system and see how it responds to allergens, specifically in the case of allergic asthma, which is an inflammatory disease of the lungs.

“In order to treat or reverse some of the effects of the disease, the first thing you have to do is study it and understand how everything works.” 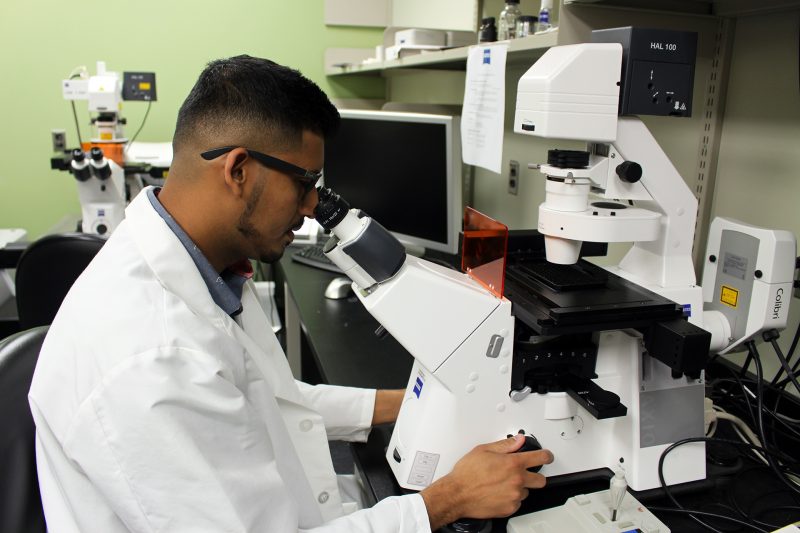 Piyadasa in the lab at the Manitoba Centre for Proteomics and Systems Biology.

The majority of asthmatics are allergic to house dust mites. When people are allergic to dust mites, their immune system identifies certain parts of the dust mite as a threat and mounts an immune response to it, resulting in inflammation and constriction of the airways.

Piyadasa studied the mechanism of how that happens. Using pre-clinical mouse models, they induced airway inflammation and allergic reactions in mice using dust mites, then looked at the inflammatory profile in the lung, how well they were breathing, and how the structure of the lungs were changing.

The second part of the project involved testing a small peptide-based drug called IDR-1002, which is known to regulate an immune response, to determine whether it would be protective in the case of allergic inflammation. After inducing the allergic reaction in mice, they gave them the peptide drug then measured how well they were breathing, level of inflammation, and physiological changes.

Piyadasa found that the peptide worked very well at regulating inflammation in their lungs. The mice that received the peptide also had better breathing capacity.

“Hopefully by supplementing these treatments with peptides, we can lower the dose that’s required for steroids to work,” says Piyadasa, “IDR peptides don’t cause your immune system to be suppressed, which is very helpful. Rather than suppressing the immune system, it regulates it, and it helps balance the inflammation.”

While the results are encouraging, it will be a long time before this treatment is available to humans, since the peptide drug will have to go through several trials and safety tests.

Another aspect of Piyadasa’s project involves trying to figure out how the peptide is causing improved breathing capacity and reduced inflammation in the mice by studying the molecular pathways. This in turn is helping them learn more about the mechanisms of disease development, which is not always straightforward in a disease like asthma.

“One of the biggest issues is that asthma is such a heterogeneous disease. Everybody has different reasons as to why they get asthma, how it develops and at what age they develop it. That’s usually the case when you study the immune system, it’s very difficult.”

Piyadasa hopes his research will contribute to a better understanding of asthma.

“I really enjoy the innovation and discovery, of things that we don’t actually know but are actively studying. There’s always a purpose in what we’re doing. We’re not just sitting in a lab and pipetting away, we’re hoping that whatever we do in terms of translational biomedical research someday helps in developing a useful drug.”