The Medicine Class of 2026 recites the Physician's Pledge as part of the White Coat Ceremony.

Stay humble and listen to your patients, a distinguished UM alumnus told first-year students at their official welcome to medical school on Aug. 24.

“Important lessons about medicine and life will come from your patients,” said retired cardiologist Dr. Hugh Smith, former CEO of the Mayo Clinic in Rochester, Minn.

“They have much to teach you about love, faith, hope and courage.… One of the most significant skills you will develop is active, thoughtful listening.” 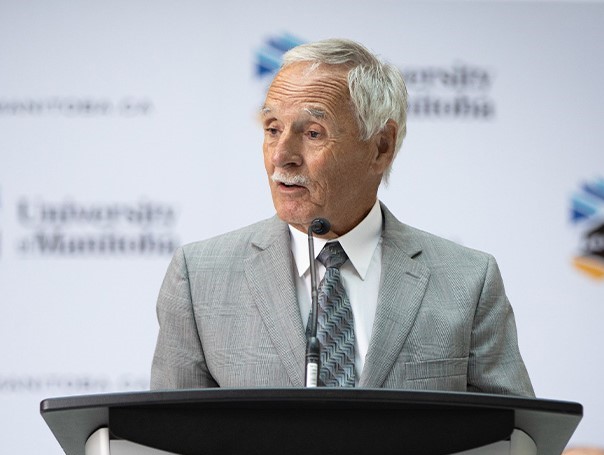 Smith earned his MD at UM in 1965 and received an honorary doctorate from UM in 2008. His contributions to medicine include being one of the first physicians to perform a coronary angioplasty in the United States.

He gave the Alan Klass Memorial Address at Inaugural Exercises for the Max Rady College of Medicine Class of 2026, held at the Brodie Centre on the Bannatyne campus.

The event, held completely in person for the first time since 2019, included the White Coat Ceremony in which the students are formally cloaked in their first white coats and recite the Physician’s Pledge.

Smith told the students that the white coat symbolizes compassion, trust, diligence, integrity and professionalism, adding, “Your patients will need these and expect them from you.”

Sharing a story from his own early career, he recalled how, for several days in a row, he gently spoke to and touched the hand of a hospital patient who was assumed to be unconscious and showed no response. The patient later told him how deeply meaningful these gestures had been.

“So much of medicine is about human interaction,” Smith said.

Dr. Peter Nickerson, a 1986 UM alumnus who is the incoming dean of the Rady Faculty of Health Sciences and the Max Rady College of Medicine, told the class that exactly 40 years ago, he was sitting where they were.

“Our objective … is to teach you to become medical experts, scholars and managers,” said Nickerson, a kidney specialist and organ transplantation researcher. “As well, we will train you to become professionals, health advocates, communicators and collaborators.”

Several speakers emphasized that the diversity of the 110-member class bodes well for greater health-care equity for Manitobans.

Nickerson noted that 35 of the students consider themselves to be members of a visible minority, 30 students’ primary language is other than English or French, and the class includes students who live with a disability and students with a personal or family background as refugees to Canada.

Sheila Le, a 20-year-old member of the class whose father arrived in Canada as a refugee from Vietnam, said about the ceremony, “It was a really happy moment for me. It made me feel really grateful to be here.”

The class includes two brothers, Bilal Raja, 25, and Muhammad Usman Raja, 23. The siblings from Pakistan arrived in Winnipeg 11 years ago. Bilal said he had seen several friends enter the medical school and was thrilled to be accepted himself.

“Every year, I’ve been watching the ceremony,” he said. “For me it was very emotional.”

Muhammad Usman said the ceremony made him feel the responsibility of entering the profession. “Dr. Smith’s talk really spoke to me – him talking about how the white coat has so much meaning to it. Then when the white coat was put on me, I felt that I now have to grow as a person.”

Mercedes Stemm, a Mi’kmaq woman from Natoaganeg First Nation in New Brunswick, is one of 13 future Indigenous physicians in the class.

The 24-year-old said she was drawn to UM by the extensive support provided to Indigenous students by Ongomiizwin, the Indigenous Institute of Health and Healing in the Rady Faculty of Health Sciences, and by the scope of UM’s Indigenous health curriculum.

Stemm said she has imagined taking the Physician’s Pledge since she was a child.

“I was choking up a bit saying it, after all this time dreaming of being a physician. It was a really powerful moment.”