A group of UM students in a leadership program have launched a podcast as a resource for nurses and nursing students in Manitoba.

Season 1 of the Through My Eyes: Nursing Perspectives podcast features five episodes that tell the stories of nursing leaders across the province who have contributed to the profession in significant ways.

The podcast’s creators are participants in the President’s Student Leadership Program (PSLP), a unique-in-Canada, non-credit program that brings together post-secondary students to build their leadership potential. It’s the flagship program of the James W. Burns Leadership Institute at UM’s Asper School of Business.

The students decided on the nursing podcast for their PSLP leadership service project as a way to uplift both present and future health-care workers.

“The goal of this project is to really fill a need in the community,” said Guneet Uppal, a third-year bachelor of science student. “A lot of us had connections with nurses who were dealing with additional challenges [with COVID-19] on top of the regular ones. We were able to recognize that need by having some conversations with nurses.”

Viktor Popp, a sixth-year mechanical engineering student, said producing the podcast also allowed the group to avoid the COVID-related uncertainty of organizing in-person events. “By choosing the podcast, we knew we could achieve the deliverable that we set out,” Popp said.

The five students in the PSLP group worked on the podcast in collaboration with the Association of Regulated Nurses of Manitoba and the UM Rady Faculty of Health Sciences. The episodes range in length from 33 to 53 minutes. Each is hosted by a different member of the PSLP group and covers a different nursing-related theme, such as Indigenous nursing, professional growth and innovation in nursing.

The podcast features prominent voices in the nursing profession in Manitoba, such as Melanie MacKinnon, executive director of Ongomiizwin – Health Services at UM, Dr. Donna Martin, associate dean of the College of Nursing, and Cindy Fehr, CEO of the Nurse Practitioner Association of Manitoba. 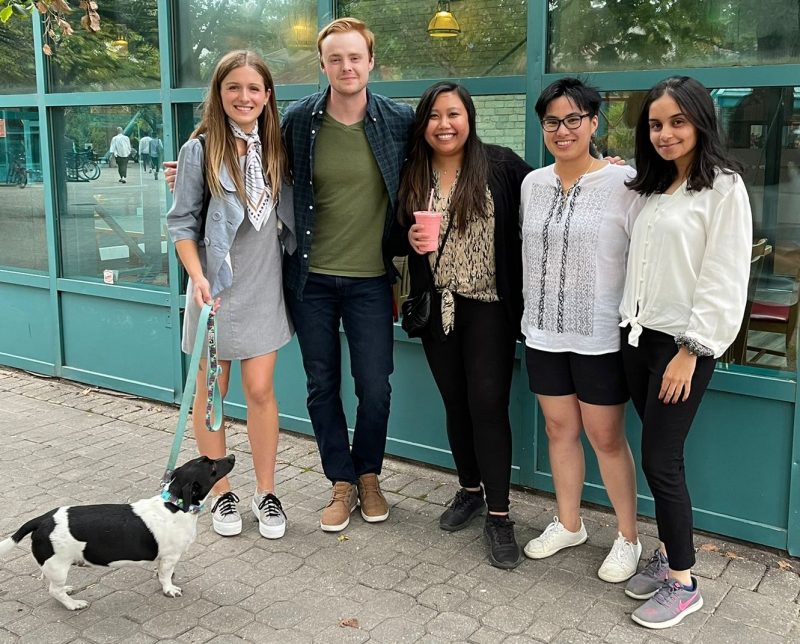 “What we wanted was to create a podcast that would support and uplift Manitoba nurses, but I think something really wonderful that it displays is the diversity within the nursing profession,” said Sasha Kullman, a fifth-year kinesiology and recreation management student.

“There are many different routes that you can take as a nurse. It’s not just a nurse working in a hospital, which is what a lot of people think when they think of nurses. You can make real, impactful change in the health-care field as a nurse. You can be a leader in health care and highlighting the vastness of the nursing field was something that’s really valuable that came out of the podcast.”

The PSLP group that created the podcast also included Meycee Kalaw-Crevier, a master of business administration student, and Alixa Lacerna, a master of architecture student. Although the PLSP students have completed their project, the podcast was produced with the potential of future seasons in mind.

“There was a really a big emphasis on planning the project in a way that it can be scalable and sustainable in the long term. This is something that can be replicated. We have developed all the documentation and tools to pass that along,” said Kullman.

The podcast’s third episode, Silver Linings & Comic Relief: Moments of Hope and A-ha!, was released on Nov. 9 and features Dr. Genevieve Thompson, an associate professor in the College of Nursing.

The Through My Eyes: Nursing Perspectives podcast can be streamed on Soundcloud. A new episode has been released every two weeks since the first episode went live on Oct. 13.