When Oghogho Okoro, an international student with the College of Nursing, Rady Faculty of Health Sciences started looking for a research assignment this summer, she was quickly drawn to working in a First Nations community after speaking with her advisor, Dr. Donna Martin, associate dean, graduate programs.

“I’m really attracted to the Indigenous culture,” Okoro said. “The music and dance; it reminds me of home.”

Okoro was one of two College of Nursing students originally from Nigeria who took part in a workshop with youth in Little Saskatchewan First Nation that explored video as a way to share the community’s continuing struggles following a devastating flood in 2011 that was the result of water being diverted from Winnipeg to 17 First Nations communities.

The workshop focused on the production of participatory videos, which are similar to documentary films, but made by a group or community to tell their own stories. It was part of a new course connected to a Canadian Institutes of Health Research (CIHR)-funded study led by Martin and Dr. Shirley Thompson, associate professor at the Natural Resources Institute (NRI).

“We partnered with the chief and council to document how community members experienced the emergency evacuation, prolonged displacement and eventual resettlement,” Martin said. “This year, youth in the community requested a film production workshop so they could learn how to widely share their own stories.” 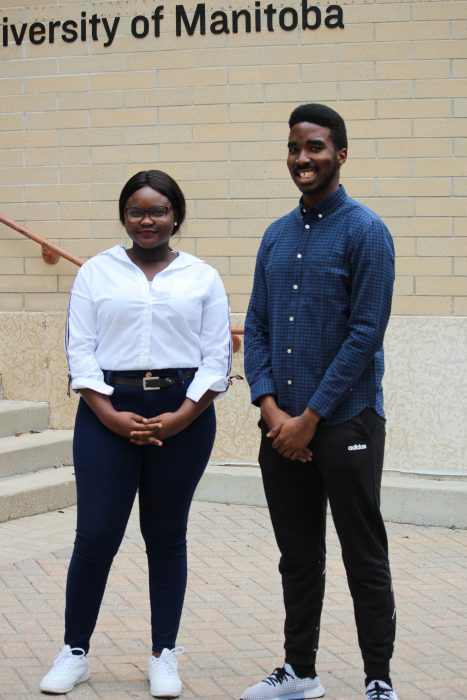 Oghogho Okoro and Sochimaobi Nweze enjoyed the filmmaking process and learned that video has great potential as a way to share research findings.

Okoro and fourth-year student Sochimaobi Nweze had little experience with video or filmmaking prior to the workshop, but they enjoyed the process and learned that video has great potential as a way to share research findings.

“Participatory videos can unleash real social change in society, and they reach a wider audience than journal paper articles,” Nweze said, noting three previously produced videos that were part of the study have already been viewed more than 16,000 times on YouTube.

“It is a medium that should be used to disseminate research findings, as it is easily understandable and is instrumental in empowering communities,” he added.

The workshop was held in Little Saskatchewan over two days in June. It included eight community youths, two elders, twelve NRI students and two U of M videographers. Community members participated in all stages of the film production, including the filming, scriptwriting, narrating and editing.

The students learned and taught community members how to utilize video-making tools, while also learning the community’s flood stories first-hand.

“The community lacked the basic infrastructure necessary to function. They had bad roads, substandard housing fitted with low-cost cisterns, and lack of a waste disposal system with waste burned daily,” Nweze said. “In spite of these limitations, they were very accommodating and eager to share their stories.”

Okoro, who moved to Manitoba in 2016, added that the workshop was an “eye-opener,” as she had never been to a First Nations community before.

“Little Saskatchewan First Nation is a hunting and fishing community. I loved their connection with the land, their culture, the personalities of the people and how welcoming and hospitable they were to us,” she said. “It was my first time being on a reserve and I had a great experience seeing the way of life and listening to the stories of the youth we interviewed.”

The workshop led to the creation of four vignettes, collectively referred to as “Returning Home,” that cover various issues that arose from the flood and displacement. The videos will be released later this fall by the Eco-Health Learning Circle.