Maximus Sandberg stood in the middle of the Pinaymootang School gym holding a stack of pamphlets and papers he planned to take home and read. The Grade 12 student had just visited the 10 booths that were part of the health-care professions career fair held on Pinaymootang First Nation on September 24.

The job fair opened his eyes. He was thinking about entering the trades, but after visiting the booths, a career in health care was on his mind.

“I really just thought there were nurses and doctors and therapists, but actually within those areas there are more branches where people are focused on one specialty, which is pretty interesting,” he said.

The Rady Faculty of Health Sciences had four booths at the job fair that was open to students from the surrounding communities as well. Connor Ford stood behind the Max Rady College of Medicine booth. The first-year medical student volunteered because he wanted the opportunity to talk with students like Sandberg who may not have thought about a health-orientated career.

Ford shared with some of the kids that 15 of the incoming 110 U of M medical students this year are Indigenous. He said a lot of the kids looked shocked by this information and they didn’t seem to realize that becoming a doctor could be in their future too.

“I wanted to give the kids a glimpse of what is it that we do, and ensure they realize that these opportunities are accessible, and that there are different programs related to equity that will further enhance the ability of Indigenous persons to pursue them,” he said. 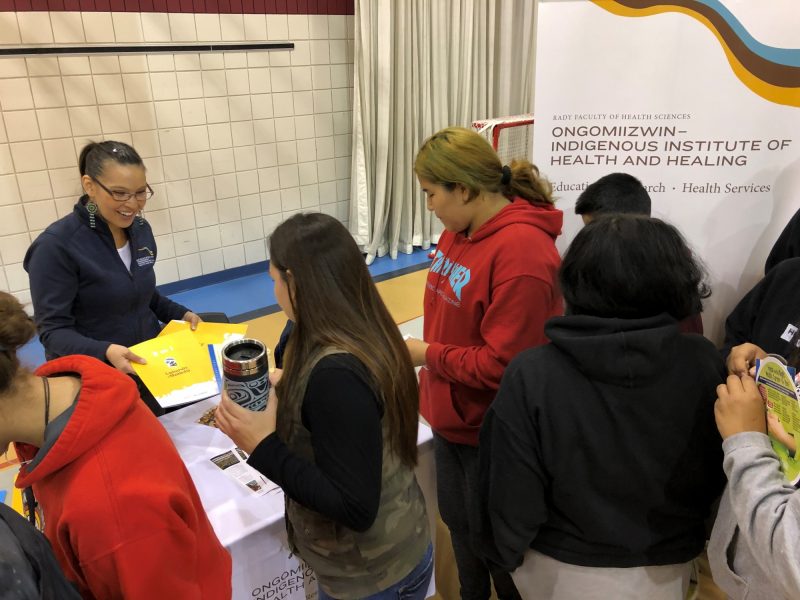 Hart spent the morning meeting students from the Ongomiizwin – Indigenous Institute of Health and Healing booth. She said it was important for the young people to see themselves. That’s why having Indigenous university students like Ford behind the booths serving as the face of their professional health program is crucial, she said.

“The university students were able to share their experiences, which would most likely be quite relatable for the students that we were meeting today and to be able to offer a positive message that these are some of the careers they can consider,” Hart said. “I really hope that what the kids took away was that there is a community waiting for them here once they decide to come to the University of Manitoba.”

Sietta Marsden stopped by the College of Nursing booth to obtain more information about the profession. The Grade 12 student has been thinking of becoming a nurse since she started high school. She wants to work in her community or in the surrounding area. “It’s the thought of helping other people,” she said as the reason she wants to become a nurse. 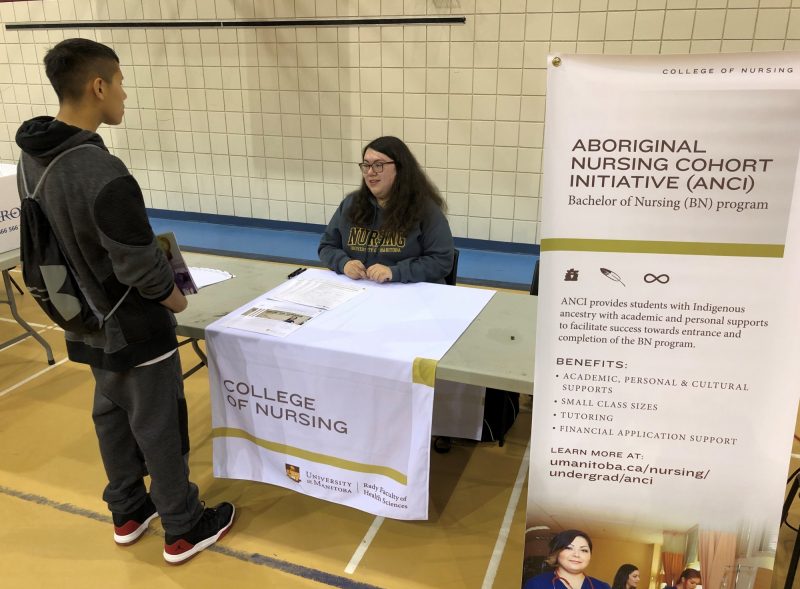 Chantelle Chartier, a recent nursing graduate, shares information about the College of Nursing with a student at the health-care professionals career fair held on Pinaymootang First Nation.

Gwen Traverse helped organize the event due to the need for more Indigenous health professionals.

“If First Nations people became doctors and became nurses, I think they would have more of an understanding of our culture and the pressures that we’re currently facing,” she said.

Both the Rady Faculty’s College of Rehabilitation Sciences and the College of Nursing were also present at the fair, disseminating information about their colleges’ respective programs. Chantelle Chartier, a recent nursing graduate, said she volunteered to work the booth because she wanted to help inspire the next generation of Indigenous health-care professionals.

“I hope that by sharing our stories, our triumphs and our struggles, that the wonderful youths that I met today find some commonalities and they recognize their own potential to achieve their goals, and their hopes and dreams,” she said.