Indigenous excellence in health and sports extends beyond FKRM

Katie McKenzie discusses how sports empower students from all backgrounds, across all disciplines

Katie McKenzie, a Gitanmaax First Nations student with roots in Treaty 5 territory, has been curling competitively for about five years, currently competing out of the Saint Paul Curling Club with a focus on mixed doubles.

McKenzie isn’t in the Faculty of Kinesiology and Recreation Management, though she says she considered that path when she started university. Instead, she’s pursuing labour studies with the intention of later studying law. On the side, she has been curling— recently representing Manitoba at the world junior qualifiers in Saskatoon with her team out of the St. Paul Curling Club. They didn’t win, but she explains that it was an incredible experience.

Curling has proved an important outlet for McKenzie, giving her a break from her studies when needed and teaching her important lessons about focus and team building. She insists that access to sports and recreation is essential for people working in all fields and studying in all faculties. She would also like to see the world of sports become more inclusive to Indigenous people, and other minority groups. 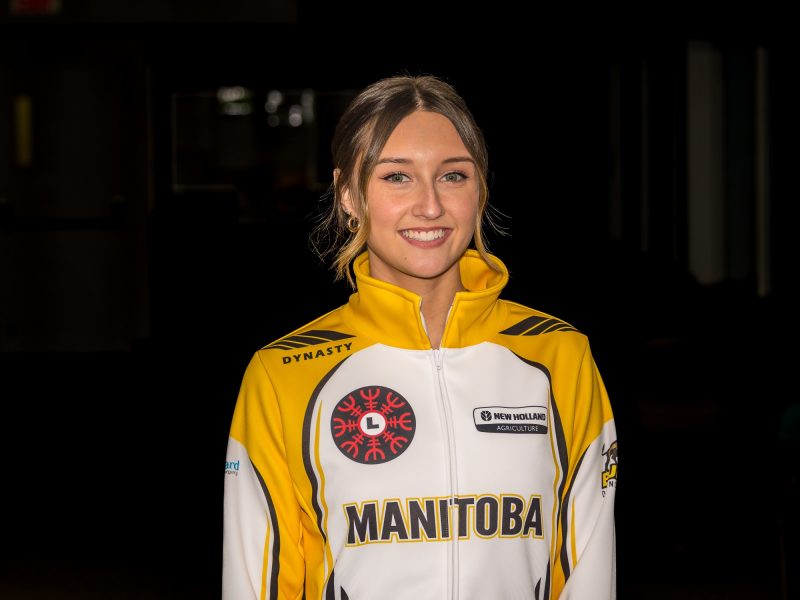 To expand the scope of university, recreational, and pre-professional sports programming, McKenzie says it’s important that organizations continue telling stories about Indigenous and diverse athletes, showing that everyone belongs in athletic spaces.

“I personally think that representation is a huge factor . . . because it shows that we do belong in this area and there is space for us to take up in athletics,” McKenzie explains.

“If you see someone in your position it gives you some confidence going into it,” she says, “it makes people feel welcomed and like they belong in these spaces.

It’s important is that we begin to understand that regardless of someone’s lived experiences, sport can benefit them. We can’t all study kinesiology or be Bisons all-stars. But maybe more of us can start to reap the benefits of getting involved in athletics in some capacity.

McKenzie says she benefitted from having parents who were big sports advocates and who always encouraged her to play sports.

“There are a lot of things that can be learned from athletics,” McKenzie explains, “especially team building and being in the right mindset at the right time.”

When asked about Indigenous History Month, and how UM can better accommodate the needs of Indigenous students across departments who are interested in getting involved in sports, McKenzie is clear: “it can’t just be a month.”

“If you want to integrate real change, then it has to be a constant thing . . . highlighting things throughout the year is really important.”

McKenzie has recently been notetaking for Indigenous Community Dialouge Sessions at UM, which explore the ways the university could better meet the needs of First Nations, Inuit, and Metis students. She says sitting in on these sessions has opened her eyes to new ways that the university could become more inclusive to these communities.

For FKRM, an important first step is ensuring that sports and recreation programming is welcoming to the diverse student body at UM, so that people from all backgrounds and studying in all departments feel like they belong in these spaces.

If you have thoughts about the way the FKRM could improve its engagement with Indigenous, Metis and Inuit students, please reach out to Heather McRae, Director for Indigenous engagement: heather [dot] mcrae [at] umanitoba [dot] ca.