In the kids’ corner

Allan Becker [MD/69] was a young family doctor in Dauphin, Man., when he personally experienced how alarming a child’s episode of asthma can be.

His eldest child, Pam, born in 1971, had her first acute asthma attack as a baby. “She was coughing and wheezing and in distress,” recalls the Regina-born physician, now a U of M professor of pediatrics and child health. “It’s scary for the kid, and scary for the parents.

“A major reason that I went back to university to train in pediatrics, and then in allergy and clinical immunology, was my experience as a parent. But also, the ’70s were the decade when the modern epidemic of asthma really began. I was seeing more and more kids who needed better approaches to treatment.”

In the early 1980s, Becker embarked on a prolific research career, becoming an internationally recognized expert in pediatric allergy and asthma. He has published more than 280 papers in peer-reviewed journals, lectured in countries as far-flung as China, Israel and Brazil, and attracted media attention from outlets such as the New York Times and the BBC.

He was the lead author of the first-ever Canadian guidelines on pediatric asthma – a chronic inflammatory disease of the airways – and contributes to worldwide guidelines for asthma management and prevention.

“We believe that the interaction of genes and environment drive the development of asthma and allergies, as well as other chronic diseases like diabetes, obesity and inflammatory bowel disease,” he says. 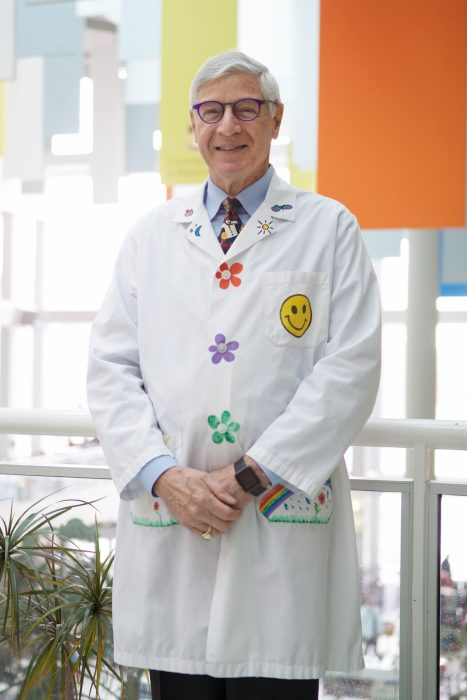 The still-youthful clinician-scientist is given to calling colleagues “kiddo” and making snazzy fashion choices such as striped socks and purple glasses frames.

We spoke with Becker when he was recently honoured with the 2018 Dr. John M. Bowman Rh Institute Foundation Award for his outstanding research accomplishments.

You’ve been a key Canadian leader of birth cohort studies, in which you track a group of newborns as they move through childhood. Tell us about your first one.

In the mid-1990s I led the Canadian Asthma Primary Prevention Study, which followed hundreds of children. We encouraged breastfeeding and instructed the parents to avoid exposing the kids to tobacco smoke, dust mites, furry pets, early-life daycare, and to delay exposure to foods like peanut that kids are often allergic to.

We had a lot of hubris. By the time the kids were seven, we had achieved a huge reduction in asthma compared with the control group. But because we had asked the parents to change so many factors, we had no idea why!

At that same time, research started to show that some of those things, like having pets and going to daycare, actually have a preventative effect. And today, we recommend introducing foods like peanut early, so that guideline has been reversed. It’s an example of the paradigm shifts that have happened in this field. It shows why education continues to be important.

What did your next birth cohort study reveal?

With the 1995 Manitoba birth cohort Study of Asthma Genes and the Environment, we looked at a broader range of factors, such as stress. We were able to show that children whose moms were persistently distressed in the first seven years of the child’s life had an increased risk of developing asthma.

When those kids, who had been in a chronically stressed environment for years, were stressed themselves, they were less able to produce their own cortisol as a response. Cortisol helps damp down inflammation.

You’re now co-leading the Canadian Healthy Infant Longitudinal Development (CHILD) Study. What are some of its high-profile findings?

One of the most exciting things about the CHILD Study is that we’ve collected and banked the kids’ poop regularly since birth. The kids are eight years old now. Having their stool allows us to analyze their gut microbiota (bacteria).

We reported that a baby’s microbiota differs if they’re breastfed versus formula-fed, and differs in caesarean birth versus vaginal birth. Scientists had known, previously, that if you’re delivered by C-section you have about a one-third greater chance of developing asthma. Our study provided one of the first mechanistic understandings of why. That paper was recognized as the Canadian Medical Association Journal paper with the greatest impact of 2014.

One of the mysteries of asthma is that at age eight, twice as many boys as girls have the disease. By adolescence, it’s equal in both genders. In adults, three times as many women as men have severe asthma. Nobody knows why this gender switch occurs. Obesity may play some role in it. We want to study that in the CHILD cohort.

You could have left Winnipeg for a larger university. What do you value about the U of M?

Local collaboration is critical for early-career researchers. That local support is absolutely essential to get ready to work at a national and international level.

There’s a lot of competition in high-profile centres that creates huge hurdles for new investigators to become established. If I had gone to one of those centres, I don’t think I could have done what I’ve been able to do here.

Manitoba is an ideal place for new researchers to be able to work with colleagues within and across disciplines. It’s a wonderful, welcoming environment.

As part of National Nursing Week, a group of students and faculty at the College of Nursing, Rady Faculty of Health Sciences officially launched a new initiative promoting mental health awareness with an engaging virtual event on May 10.

In honour of National Nursing Week, Mahkwa omushki kiim: Pathway to Indigenous Nursing Education (PINE), which offers support to Indigenous students at the College of Nursing in the Rady Faculty of Health Sciences, reached out to several Indigenous nursing alumni to learn about their careers and reflections on their time at UM. Below are a selection of the responses.

When Rhonda Switzer-Nadasdi [DMD/91] was a UM dental student, she took part in a two-week rotation in northern Manitoba that changed her life.