People living along the Red River were understandably very concerned this past fall when flooding occurred during a normally quiescent time of year. Ice jams—called frazil ice pans—occurred for the first time ever, causing huge cement like blocks of ice to spillover the river banks and onto surrounding fields and farmland. Roads became unpassable—relatively common in the spring, but rare so late in the year. The unusually high river flows and higher turbulence of the water plus a sudden temperature drop created the perfect storm for this type of ice to form.

If only there was research that could help understand how water flows under ice in such situations to help predict ice affected flooding in a more rigorous way so we might be better able to prepare for such emergencies. Surprisingly, there are few studies on river ice dynamics, despite prominent public and industrial concerns associated with flooding and other impacts of river ice processes. 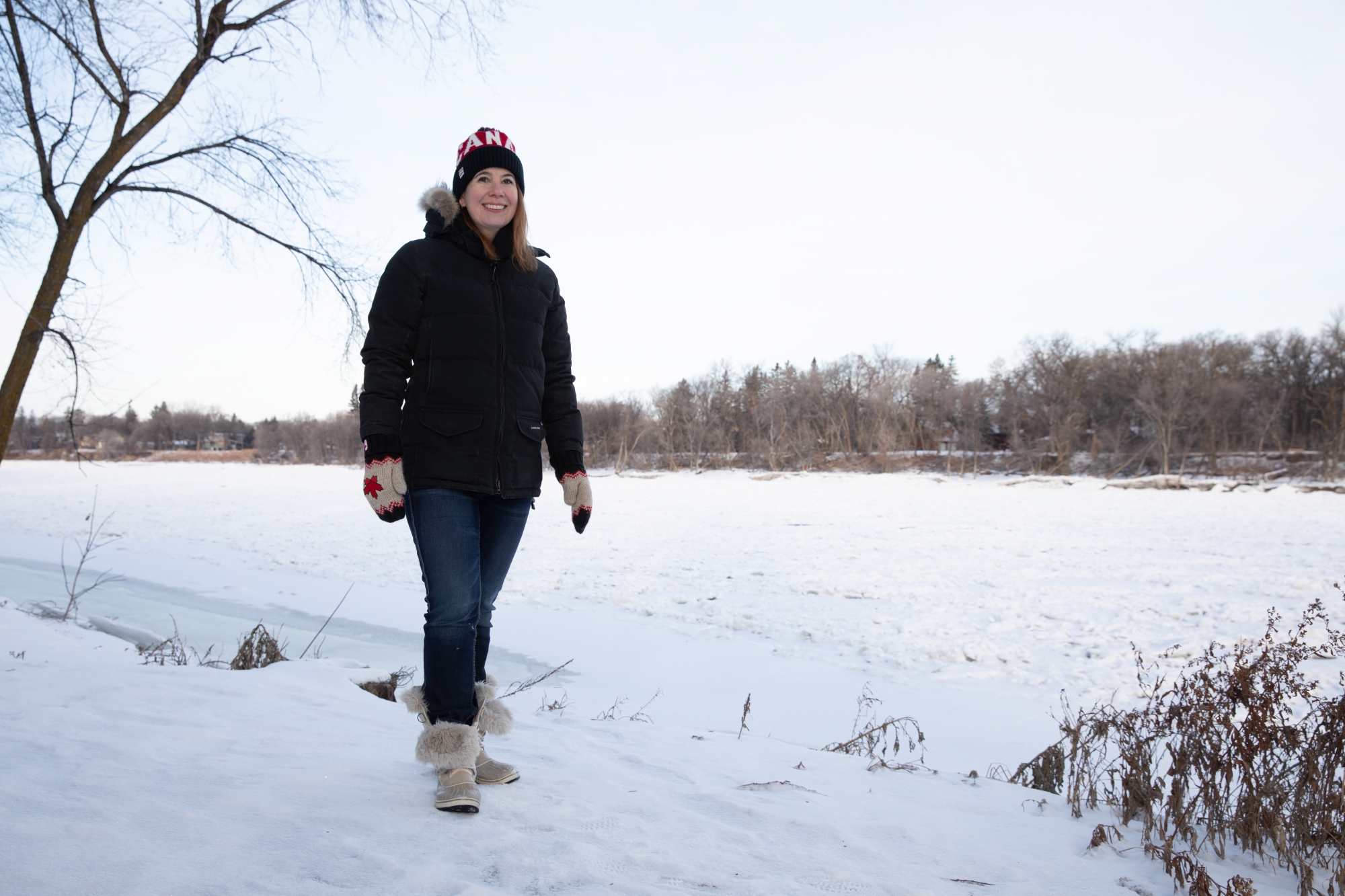 “My research on river ice engineering is in trying to further our understanding of dynamic river ice processes. For sure, it’s critical for flooding.”

“My research on river ice engineering is in trying to further our understanding of dynamic river ice processes,” she says. “For sure, it’s critical for flooding, and one of my projects is focusing on investigating ice jams on the Red River. It’s also critical for Manitoba Hydro to ensure efficient operations, but also relates to public safety and infrastructure.”

With funding received for her research through CFI, Dow developed a particle image velocimetry (PIV) laboratory at UM where she can measure water movement under simulated ice as measuring in the field poses many logistical and safety challenges. 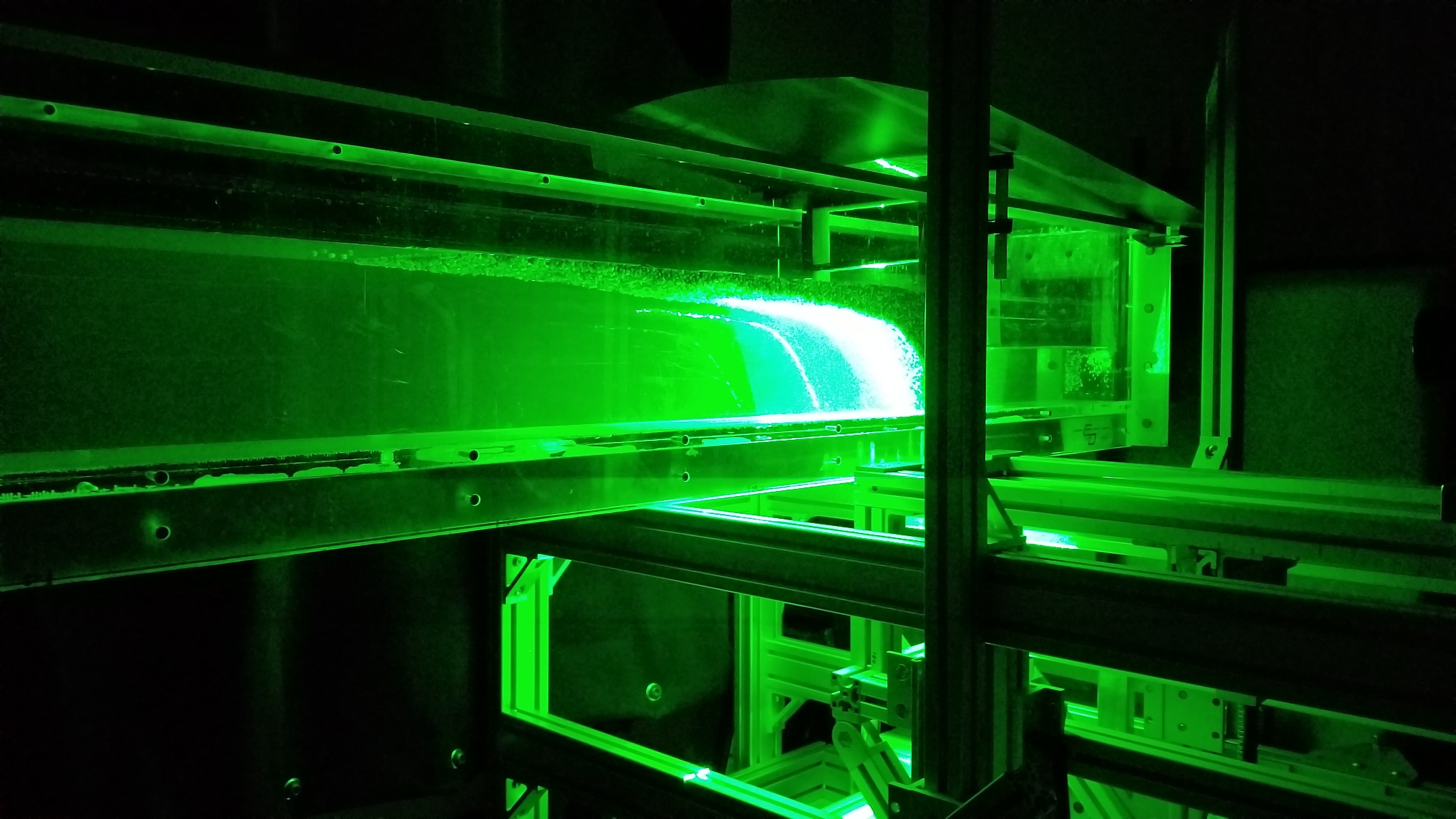 She found that the water velocity beneath a floating ice block is related to pressure distribution beneath it, allowing a better understanding of the dynamics of ice blocks that have come to rest against an intact ice cover that impacts ice cover and ice jam formation processes. Her PIV system is the only one in the world used for river ice research, which uses a high powered laser combined with cutting edge cameras and software to obtain instantaneous velocity measurements in water containing tracer particles.

Andrew Murray, a MSc student in civil engineering, notes: “In my undergrad program I didn’t meet another professor who reached Karen’s level of compassion for her students or enthusiasm for her work. It was practically contagious—to the point where just hearing the excitement with which she’d talk about her ‘fancy lasers’ convinced me to come back for a master’s degree.” Dow began her career in ice dynamics as an undergraduate summer co-op student research position at UM in 1998, then went on to earn her PhD at the University of Alberta before coming home to Manitoba. Although her main research focus is river ice hydraulics, she also has expertise in experimental hydraulics, computational hydraulics, and environmental fluid mechanics. Her most significant contribution in river ice engineering was her research on the physical behaviour of floating ice blocks, quantifying the forces that act on them by measuring pressure distribution underneath the ice block.

Since returning to UM, Dow has established a research program on the dynamics of river ice processes, initially focusing on the flow characteristics beneath partial ice covers, anchor ice formation and release, ice jam formation, and furthering the understanding of ice block stability. This has largely been through the work of graduate and postdoctoral students under her supervision, assisted by summer undergraduate research assistants doing similar work as she herself did at the beginning of her career.

Dow has earned many awards for teaching and mentoring. She recently received the 2019 Graduate Students’ Association Teaching Award, the first female engineer to receive it at UM.

“It’s pretty cool that I’m working on the Sundance Rapids anchor ice project that Karen spent researching as a summer student back in 1998,” says Brittany Peters, one of Dow’s students. “Not only is she a self-proclaimed ‘super nerd,’ Karen has been a great advisor to work with—she’s knowledgeable, supportive, open, and wants to see her students succeed.”

In fact, beyond her work on river ice, Dow has earned kudos for her work as a dynamic and inspiring educator, with an engaging personality and proven talent for building productive and diverse teams. She has a passionate dedication to promoting greater equity in engineering and academia by dedicating her prodigious skill to mentoring and advocacy for female students and professionals. She is known for her ability to inspire the people around her, particularly young women that are pursuing engineering as a profession.

Dow has earned many awards for teaching and mentoring—a testament to her educational style and dedication. She recently received the 2019 Graduate Students’ Association Teaching Award, the first female engineer to receive it at UM.

Dow has actively engaged with outreach activities to increase the participation of women in engineering throughout her career. She has made this a personal issue based on her own personal experience and understanding of underlying issues related to young women considering engineering as a career. Dow has also formally served as a mentor in the Committee for Increasing the Participation of Women in Engineering (CIPWIE) trimentorship program since 2016, for the Girls in Science Day, and at the Faculty of Engineering Make your Move event.

As a role model in the Faculty, Dow receives frequent invitations to emcee outreach events, including the Welcome to Engineering and Engineering IS for Girls events. In addition to formal mentorship programs, she is an informal mentor to many current and former students as well as many of her colleagues. 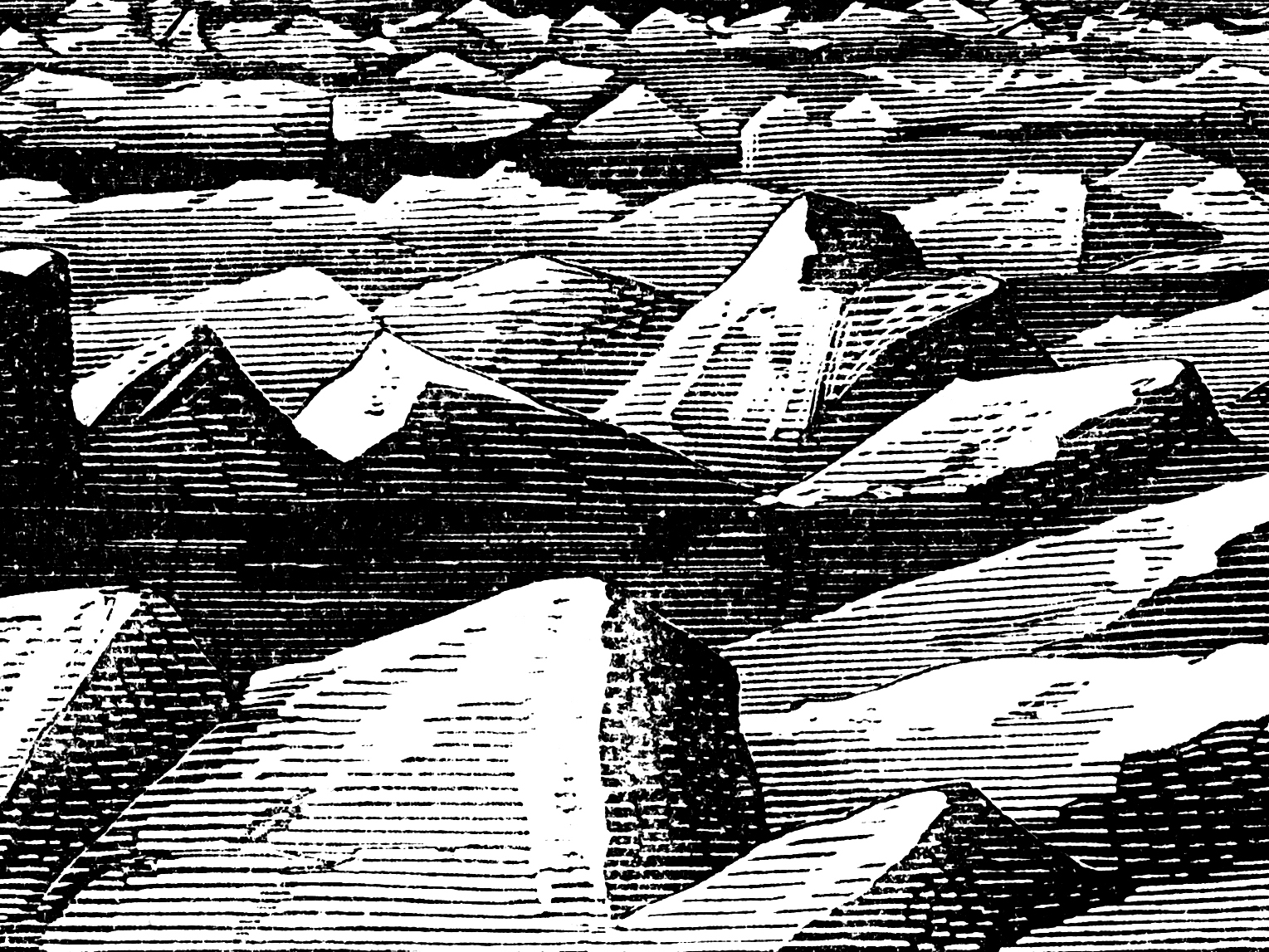 Dow’s students are currently engaged in several ongoing projects involving dynamic river ice processes. These include: A historical analysis of ice jams on the Red River north of Winnipeg, including hydraulic and meteorological analysis to create an ice jam database. This analysis will be used to develop a prediction model for breakup ice jams in the reach.

Investigating the anchor ice formation and release at Split Lake/Clark Lake on the Nelson River. This study will help further understanding of anchor ice formation and release processes as well as assist Manitoba Hydro improve its operations on the river to further develop hydroelectricity generation models to better prepare for variations that would affect electricity customers further south.

Investigating the anchor ice/aufeis dam that forms at Sundance Rapids downstream of the Limestone Generating station, including possible mitigation measures. Limestone is currently the largest hydroelectric station in the province. The ice dam constricts the flow and causes the water levels to rise on the order of 1-3 meters, translating to a loss of generation revenue of approximately $1-3 million per year. This study will advance the science of anchor ice formation and investigate possible mitigation measures.

Using PIV to investigate seepage flow through ice jams and the velocity of water beneath the ice jam. This will further develop hydraulic models of water flow under ice and refine the theoretical knowledge in this field.

Dow explains: “River ice is something that clearly affects everyone in Canada and with climate change, the dynamics of the river ice processes is going to be more variable and arguably more dynamic as a result.”