These calcite cyrstals were brought to a rock shelter at the edge of the Kalahari Desert in South Africa 105,000 years ago by early Homo sapiens. Why? // Image: Jayne Wilkins

Archaeological evidence from Ga-Mohana Hill North rock shelter at the edge of the Kalahari Desert in South Africa is challenging the idea that our species’ origins were linked to coastal environments, a new paper in Nature reports.

One of the most important finds from the site is 22 calcite crystals (smooth, white, rectangular structures). 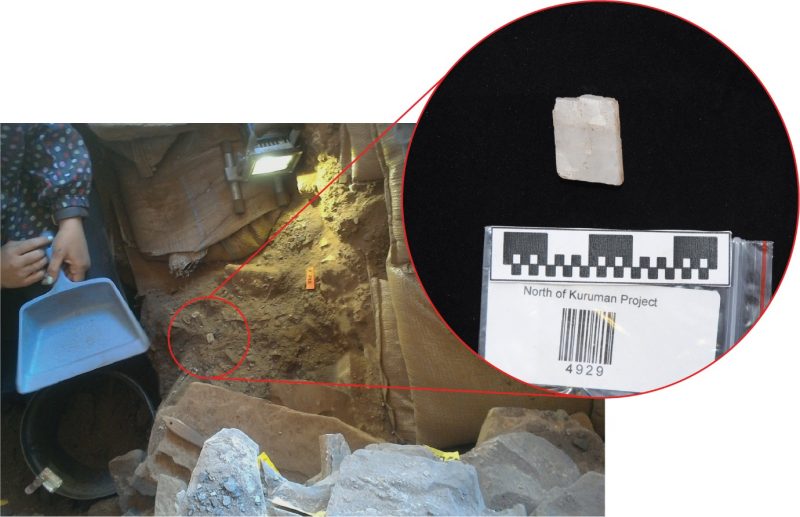 “There’s no geological reason for those crystals to be there and yet there’s 22 of them,” says Benjamin Collins, a UM researcher involved in the recent study. // Image: Jayne Wilkins

“There’s no geological reason for those crystals to be there and yet there’s 22 of them,” says Benjamin Collins, a researcher in the University of Manitoba’s Department of Anthropology who is part of the international team that published the recent findings in the paper “Innovative Homo sapiens behaviours at 105,000 years ago in a wetter Kalahari.”

“So that is a pretty good indicator that past people, 105,000 years ago, were bringing these crystals to the site,” Collins says. “The big question is, why were people bringing calcite crystals here? They serve no technological function and would not help with survival, yet they had some sort of importance, so this symbolism suggests culture. It is an indicator of complex thinking. It really changes how we view the story of human evolution.”

The crystals from Ga-Mohana may have been linked to spiritual beliefs, which is all the more remarkable considering the Ga-Mohana Hill North Rock shelter is also used to practice ritual activities today.

The discoveries of this research team, led by Jayne Wilkins from Griffith University’s Australian Research Centre for Human Evolution and a University of Toronto PhD alumni, change our perception of early Homo sapiens: Our species emerged in Africa and evidence of this has—until now—been largely discovered at coastal sites in South Africa, supporting the idea that our origins were linked to coastal environments. This new discovery from rock shelter in the interior, changes the plot of humanity’s story.

“At coastal sites, the earliest evidence for this kind of behaviour dates to about the same time, 105,000 years ago,” Wilkins says. “This suggests that early humans in the Kalahari were no less innovative than those on the coast.”

Collins examined animal bones at the site, which showed signs of tools being used to cut and smash them to extract marrow, and ostrich eggshells, a rare find at such an old site. Ostrich eggshells change colour when exposed to heat: 200-250 C heat sources turn them yellow, and 300 C or greater turns them red. The shells he examined were red, and answers for exactly why are enticingly out of reach.

“We’re not sure how the ostrich eggshells were used, potentially they could have been used as containers, but we aren’t sure,” he says. “Either way, it’s something that someone 105,000 years ago used and there is this tangible connection to the past. It’s just really, really cool and it’s a big privilege to be able to contribute to telling this story and sharing this information with others.”

Many Canadians are finally coming to terms with the truth that the Canadian government, in co-operation with Christian churches, ran a genocidal school system intended to 'kill the Indian in the child' for more than a century