Arctic research and climate change in focus at conference in Halifax

One of the most viral topics of 2019 was the growing scientific consensus around climate change, and more specifically the increasing rate of melting Arctic sea ice.

More than one thousand Arctic scientists assembled at ArcticNet’s Annual Science Meeting in December at the Halifax Convention Centre to work toward better understanding and developing responses to Arctic climate trends.

Researchers at the University of Manitoba’s Centre for Earth for Observation Science (CEOS) contributed a great deal to the meeting of minds on Arctic and related climate issues.

“The Greater Hudson Bay Marine Region encompasses very diverse regions that are nonetheless very connected in many ways, from Foxe Basin to Hudson Strait to Ungava Bay to James Bay. The water, the animals, the fish, the air. All of these things know no boundaries within that region, and so this needs to be looked at in the context of climate change and modernization,” says Dr. Kuzyk. “All of these impacts need to be looked at as an integrated system.” 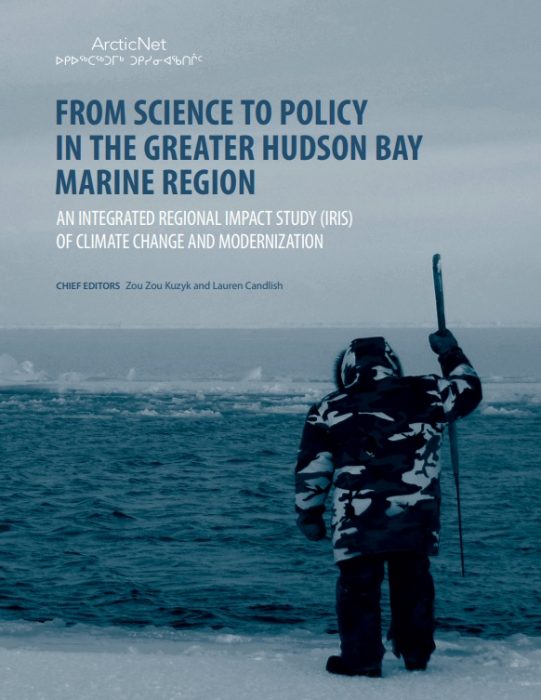 From Science to Policy in the Greater Hudson Bay Marine Region: An Integrated Regional Impact Study of Climate Change and Modernization

The full science-to-policy IRIS is available for free online.

“Microalgal communities are the base of the marine food web and are an essential contributor of primary production in the polar marine ecosystem. Freshwater from river discharge or sea ice melt can cause stress on algal communities, influencing their production. When demand for electricity is high in winter, increased discharge from the Nelson River arrives in Hudson Bay during the annual ice algal spring bloom,” says Dalman.

CEOS researchers have been examining the influence of hydro-regulation on spring and summer phytoplankton production along a spatial gradient from the mouth of the river to the marine system in southwestern Hudson Bay.

“Freshwater input had a negative influence on both the spring and summer ice algal and phytoplankton communities during their respective blooms,” says Dalman. “Understanding freshwater impact on microalgal communities can help us understand how these communities may respond as the ocean becomes fresher water under a changing climate.”

Research Associate and Manager of Communications and Outreach at CEOS Lucette Barber led a session about Expedition Churchill: A Gateway to Arctic Research, an innovative and collaborative partnership in science communication and education.

Barber says the purpose of the project is to inform anyone interested to visit, work or live in the region about the scientific importance of Churchill and the Hudson Bay.

“It’s an innovative and interactive public education and outreach campaign to share the world-leading Arctic climate change research done in the Churchill and Hudson Bay region by University of Manitoba scientists and collaborators,” she says.