Thaw slumps are also a sign of the permafrost warming. These can be seen just barely in the satellite image as small dark regions along cliff faces–both facing the ocean and within the river drainage basins. Erosion and slumping expose ancient organic carbon to the air and the hydrosphere, thus providing an extensive positive feedback to climate warming.

Photographs from the Canadian Arctic Archipelago

In a typical year, perhaps a dozen people visit Auluvik National Park in Canada’s Northwest Territories. Luckily, one of those visitors brought back some outstanding photos.

In November 2020, NASA and the University of Manitoba highlighted a few compelling features around the Thomsen River estuary on Banks Island, including lines of sea ice tracing the shoreline and the braided pattern of the river. But there’s so much more to explore across this remote lowland tundra and river valley. 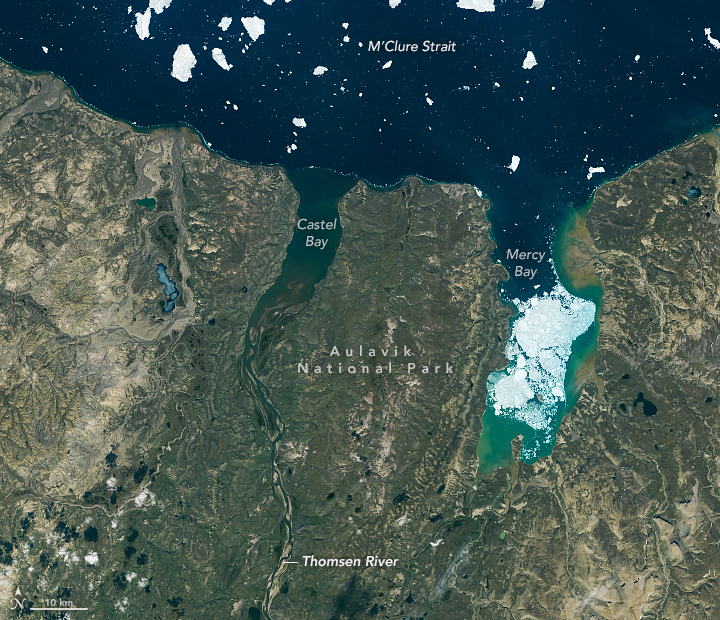 January 27th, 2021 by Kathryn Hansen/NASA Earth Observatory, and Robie Macdonald/University of Manitoba/Dept. of Fisheries and Oceans

Robie Macdonald, a scientist at the Centre for Earth Observation Science at the University of Manitoba, shared some photos that he shot while doing fieldwork in the region between 2014 and 2016. The purpose of that project was to collect geochemical measurements from small rivers across the Canadian Arctic Archipelago.

“I really do love working in these places,” Macdonald said. “Once the aircraft has landed, one is bathed in a tremendous silence broken only by waves breaking on shingle. Then you have this incredible tundra spreading out toward the hills that define the river floodplain.” 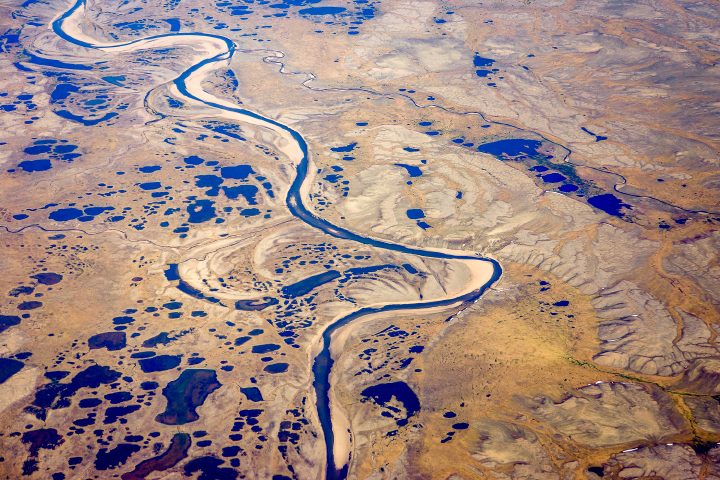 “Numerous ponds of all sizes populate the drainage basins of Banks Island, and you can see several clusters of them in the satellite image (top), especially along the small river to the west of the Thomsen. This photograph provides a closer look at one such pond cluster. In the image, you can also see textbook oxbows, which have become the setting for more ponds.” 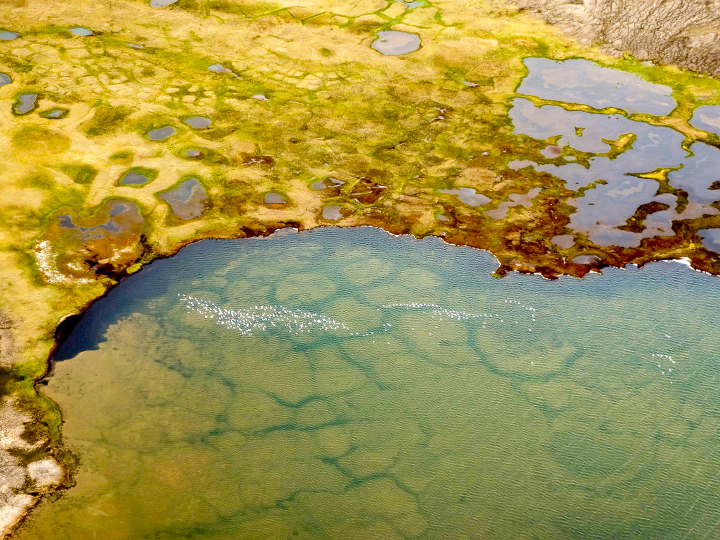 “During breeding season, it seems like almost every pond on Banks Island has its own population of snow geese (visible in this photo). You can also see old permafrost polygons that are now submerged within the pond. Polygons are widespread features of the permafrost in soil-rich locations and are produced over time by freeze-thaw cycles of the surface active layer. Permafrost thaw is widely impacting these regions, leading to feedbacks in the carbon system (CO2, CH4).” 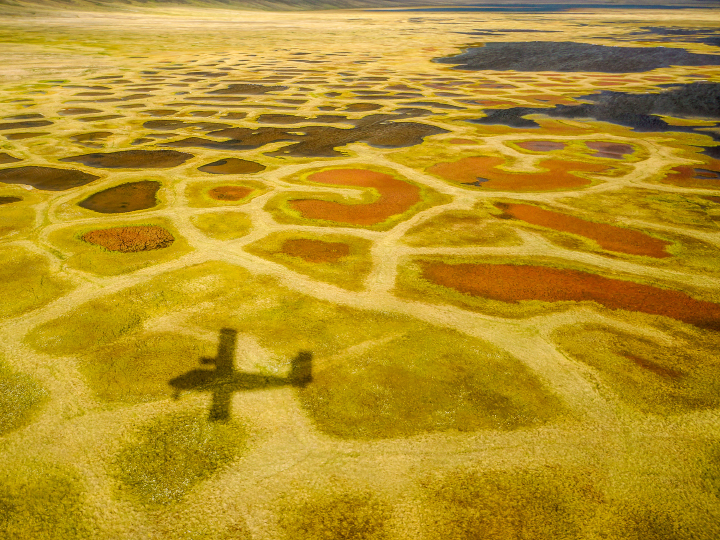 “Perhaps the most surprising characteristic of the valley bottoms in this ‘Arctic desert’ is the vibrant color of the vegetation: yellows, greens, and reds mark a dense ground cover that can be seen on the satellite image as areas with a yellowish-brownish cast.” 📷 Robie Macdonald/University of Manitoba 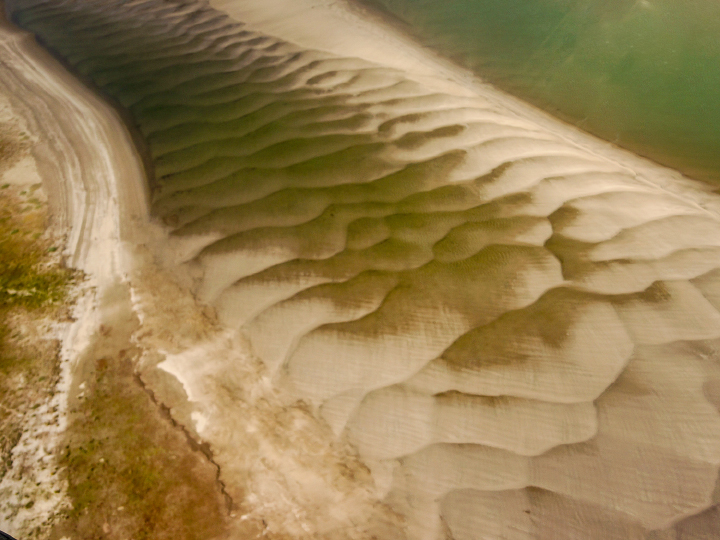 “As a result of the strong sediment supply, the large embayment at the Thomsen River mouth has been practically filled with sediment. The shallow water reveals itself in the satellite image by the lighter-greenish tone compared to water out in the channel north of Banks Island. More evidence of the ample sediment supply can be seen in beautiful displays of sand/silt ripples in the lower river between the islands. In the satellite image (top), the ripples are almost visible as grey zones between the islands before the river enters the open bay.” 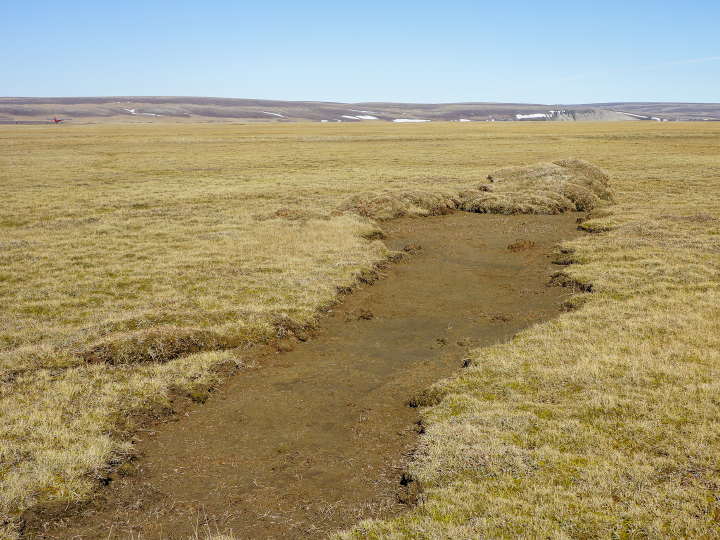 “When walking on these islands near the river mouth, you can see evidence of bank erosion and ‘ice shoves.’ These are produced when wind forces newly formed ice to ride up over the river bank and gouge out the top layer of the silty material that makes up these islands. Unfortunately, ice shoves are too small to show on the satellite image.” 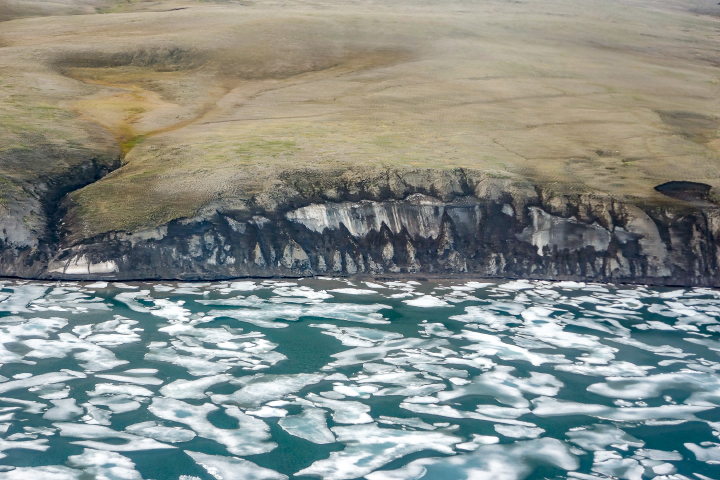 “Global warming and the extensive loss of sea-ice cover in late summer have helped accelerate coastal erosion and permafrost slumping. This image shows a section of coastline just to the east of the Thomsen River mouth that consists of a lot of frozen ice. This sort of permafrost is especially vulnerable to the changing temperature regime.” 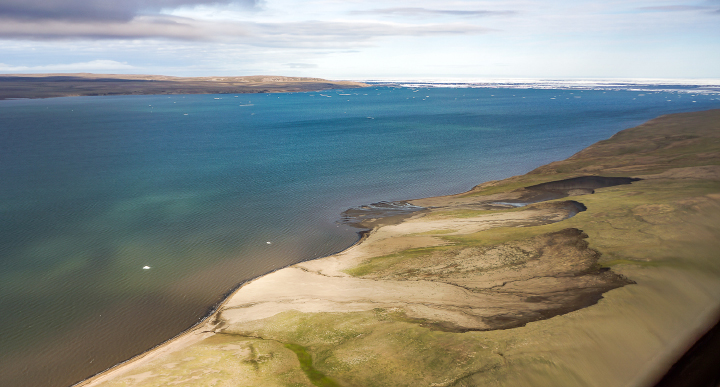 “Thaw slumps are also a sign of the permafrost warming. These can be seen just barely in the satellite image as small dark regions along cliff faces–both facing the ocean and within the river drainage basins. Erosion and slumping expose ancient organic carbon to the air and the hydrosphere, thus providing an extensive positive feedback to climate warming.” 📷 Photo by Robie Macdonald/University of Manitoba 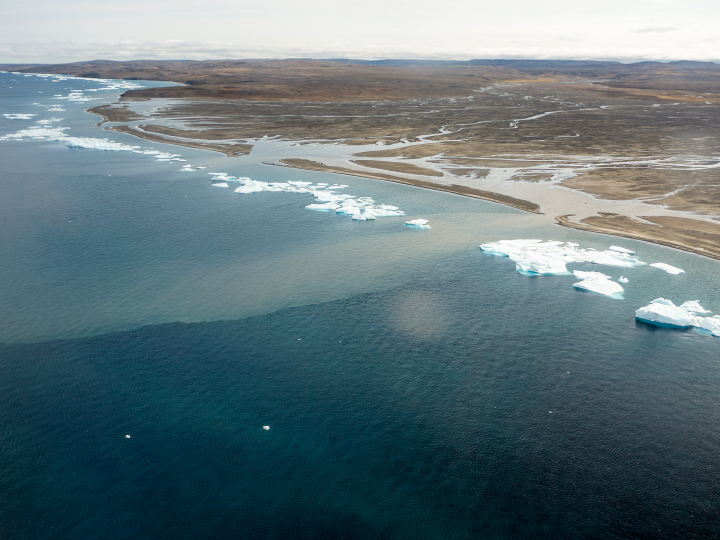 “Lines of bergy bits has collected along a thin shore margin at the point where the sea bottom rapidly deepens below ice keel depths, likely at approximately 2-4 meters. Although the grounded ice bits are continually melting, they are resupplied by more ice chunks shed from the permanent pack out in the channel. Two turbid plumes supplied by a river to the west of the Thomsen easily pass through the necklace of ice.”

9. Sampling Amid an Icy Barrier 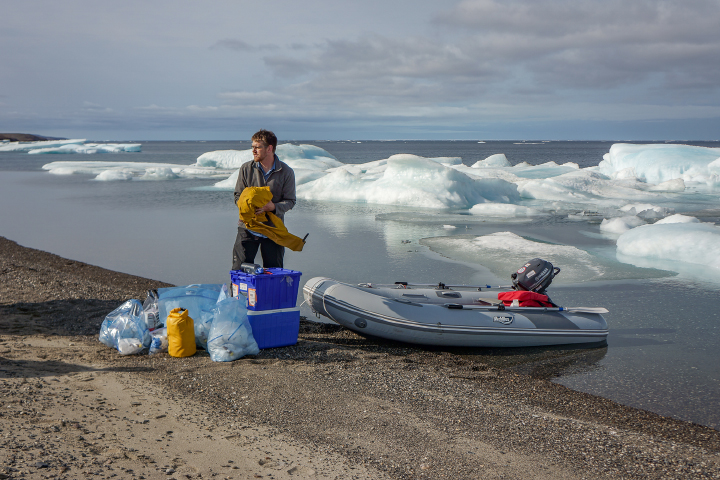 “When we were sampling the water in this region, we found this ice barrier to be a bit more of a problem to navigate in our small inflatable boats, but ice along the shore did make it simple to sample sea ice. This image shows Greg Lehn preparing to launch our boat.”

Sampling in the Thomson River itself was somewhat simpler, once we had found a suitable place to land the plane. This image shows Greg Lehn scoping out the shore of the Thomsen River near its mouth.”