As UM’s Alumni Association marks its centennial, we got nostalgic and shifted focus to how we shared campus happenings with grads of yester year. In search of oddities and treasures, we flipped through early editions of our alumni publication, held at the University of Manitoba Archives & Special Collections.

With a 90-year history of storytelling—its only hiatus during War time—the first issue launched in 1926 as the University of Manitoba Quarterly and would share a masthead with the University Bulletin before becoming known as simply the Alumni Journal. 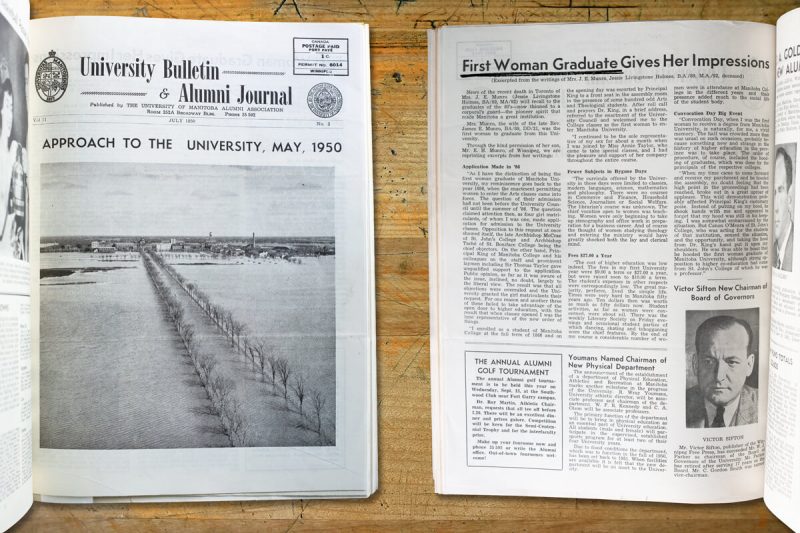 FRONT PAGE This July 1950 issue revealed the campus impact of the Red River overflowing its banks during the historic flood. At its height, more than 1,000 acres of UM property was underwater, with flooding of the basement tunnels that left electrical wiring and equipment submerged for 29 days.

INSIDE The first woman to graduate from the University of Manitoba—Mrs. J. E. Munro (Jessie Livingstone Holmes [BA/1889/MA/1892])—recalled her first day as the lone female student on campus. In Munro’s writings, published following her death the same year as this issue, she explained how she was among four women who fought for enrollment—“opposition to this request at once showed itself.” She was the only one to go through with it, initially. (Tuition was $27 for the year.)

EXCERPT I enrolled as a student of Manitoba College at the fall term of 1886 and on the opening day was escorted by Principal King to a front seat in the assembly room in the presence of some hundred odd Arts and Theological students. After roll call and prayers, Dr. King, in a brief address, referred to the enactment of the University Council and welcomed me to the College classes as the first woman to enter Manitoba University. I continued to be the sole representative of my sex for about a month when I was joined by Miss Annie Taylor, who came to take special classes, and I had the pleasure and support of her company throughout the entire course.

The chief vocation open to women was teaching. Women were only beginning to take up stenography and office work in preparation for a business career. And of course the thought of women studying theology and entering the ministry would have greatly shocked both the lay and clerical mind. —Jessie Livingstone Holmes 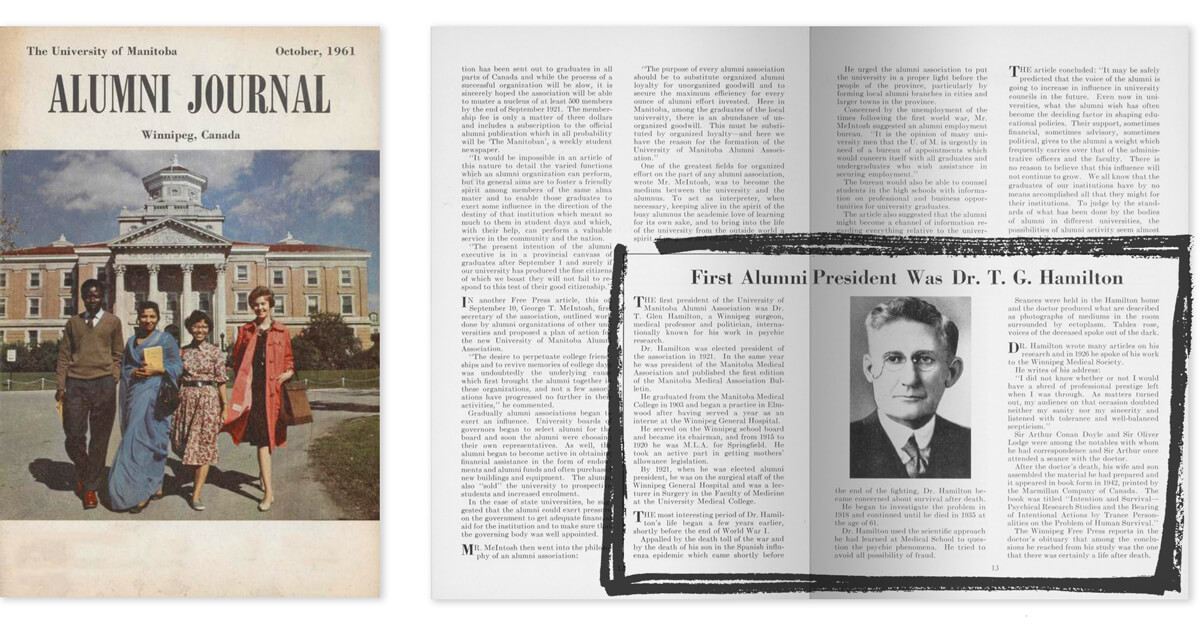 INSIDE This story throws back to 1921 when T. Glen Hamilton became the first president of the University of Manitoba’s Alumni Association. A man of science, the Winnipeg surgeon is probably best known for the dichotomy of his research into the paranormal. (He even caught the attention of Sherlock Holmes creator Sir Conan Arthur Doyle; the men would attend a seance together.) The unconventional Association president was fascinated with survival after death, triggered by the loss of his son to the Spanish flu nearing the end of the First World War.

EXCERPT Dr. Hamilton used the scientific approach he had learned at Medical School to question the psychic phenomena. He tried to avoid all possibility of fraud. Seances were held in the Hamilton home and the doctor produced what are described as photographs of mediums in the room surrounded by ectoplasm. Tables rose, voices of the deceased spoke out of the dark.

I did not know whether or not I would have a shred of professional prestige left when I was through. As matters turned out, my audience on that occasion doubted neither my sanity nor my sincerity and listened with tolerance and well-balanced skepticism. —T. G. Hamilton, following a talk he gave 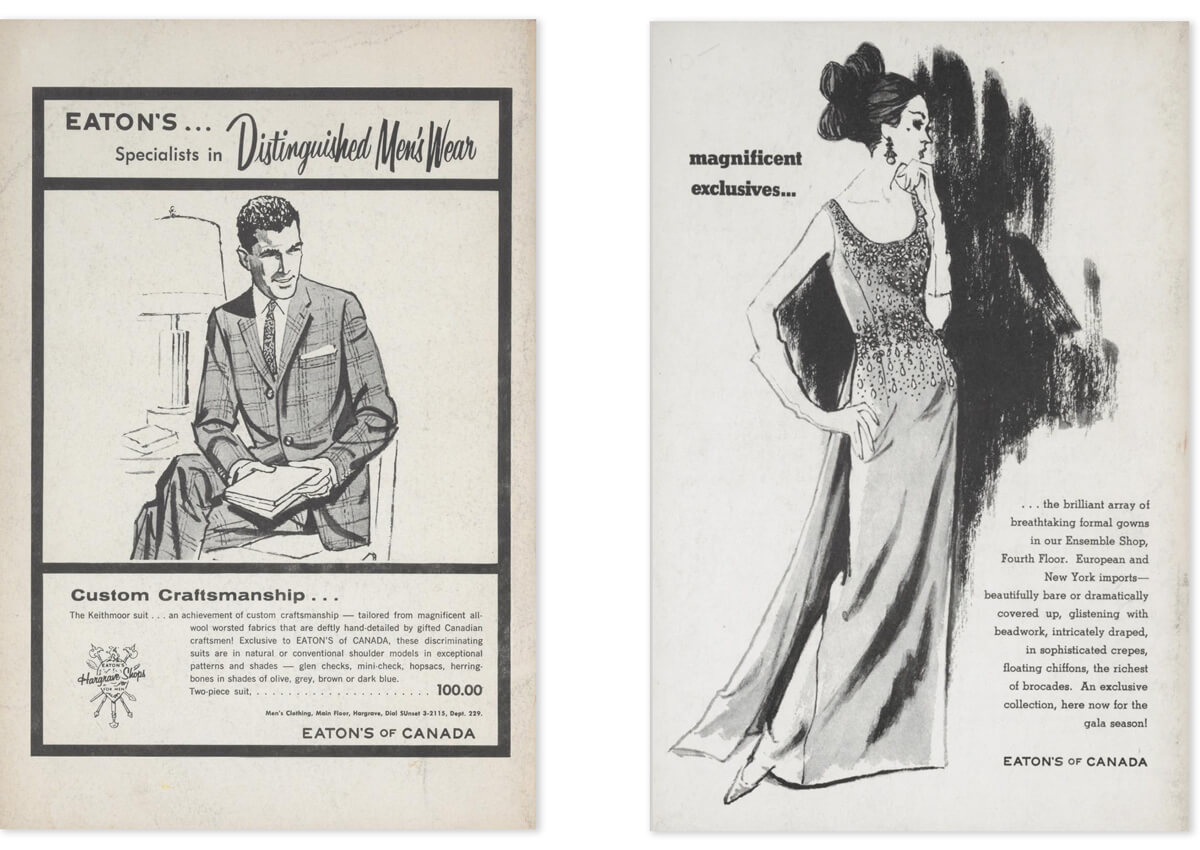 BACK COVERS Cold Winnipeg winters were prime for soirees, as evidenced through ads like these from Eaton’s in 1961 and 1965. The two-piece “Keithmoor suit” would’ve set you back $100 and came with the promise of being “deftly hand-detailed by gifted Canadian craftsmen.” While gowns were pitched as “magnificent exclusives.” 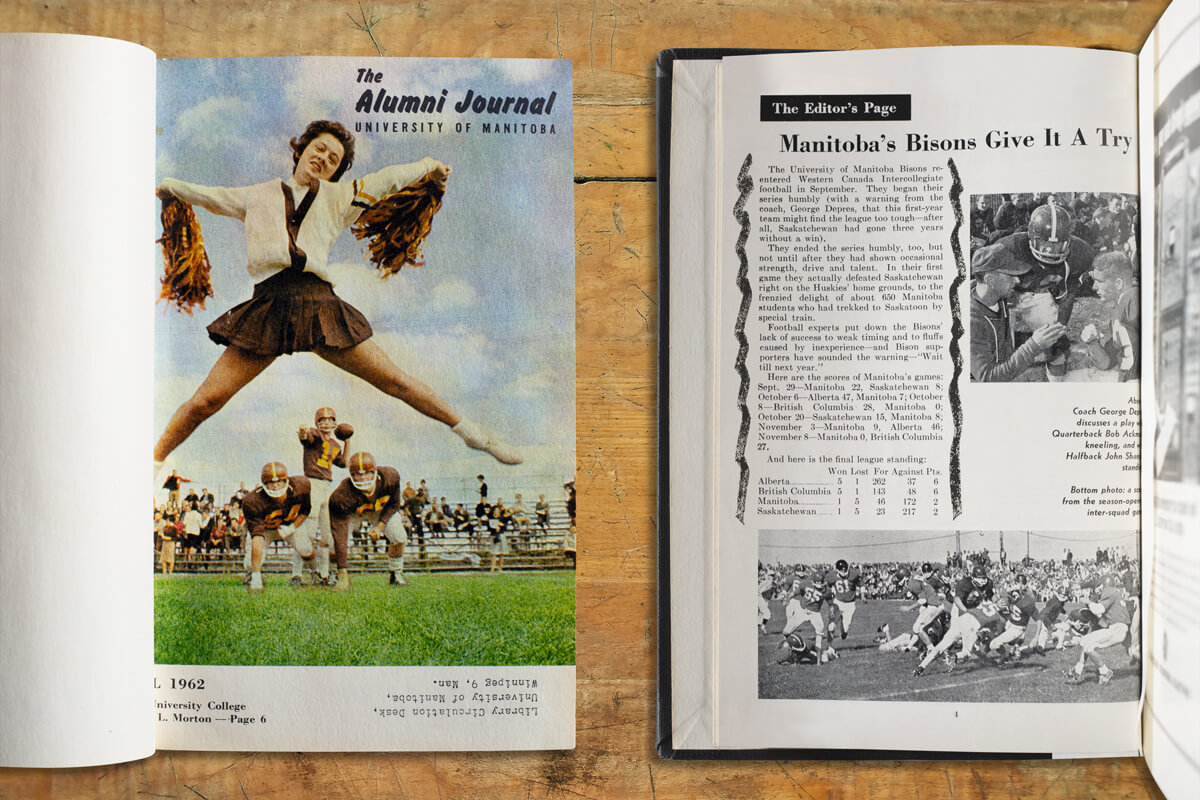 FRONT PAGE This fall cover marked the Bisons’ return to Western Canada Inter-collegiate football in 1962, after a 14-year hiatus—a “return of Manitoba to the football wars.” The program had been shut down in 1948. Cheerleader Bernadette Blackhall jumps in front of quarterback Bob Akman [LLB/67], Jim Duncan and Jerry Oleksiuk.

EXCERPT They began their series humbly (with a warning from the coach, George Depres, that this first-year team might find the league too tough—after all, Saskatchewan had gone three years without a win.) They ended the series humbly, too, but not until after they had shown occasional strength, drive and talent. In their first game they actually defeated Saskatchewan right on the Huskies’ home ground, to the frenzied delight of about 650 Manitoba students who had trekked to Saskatoon by special train. 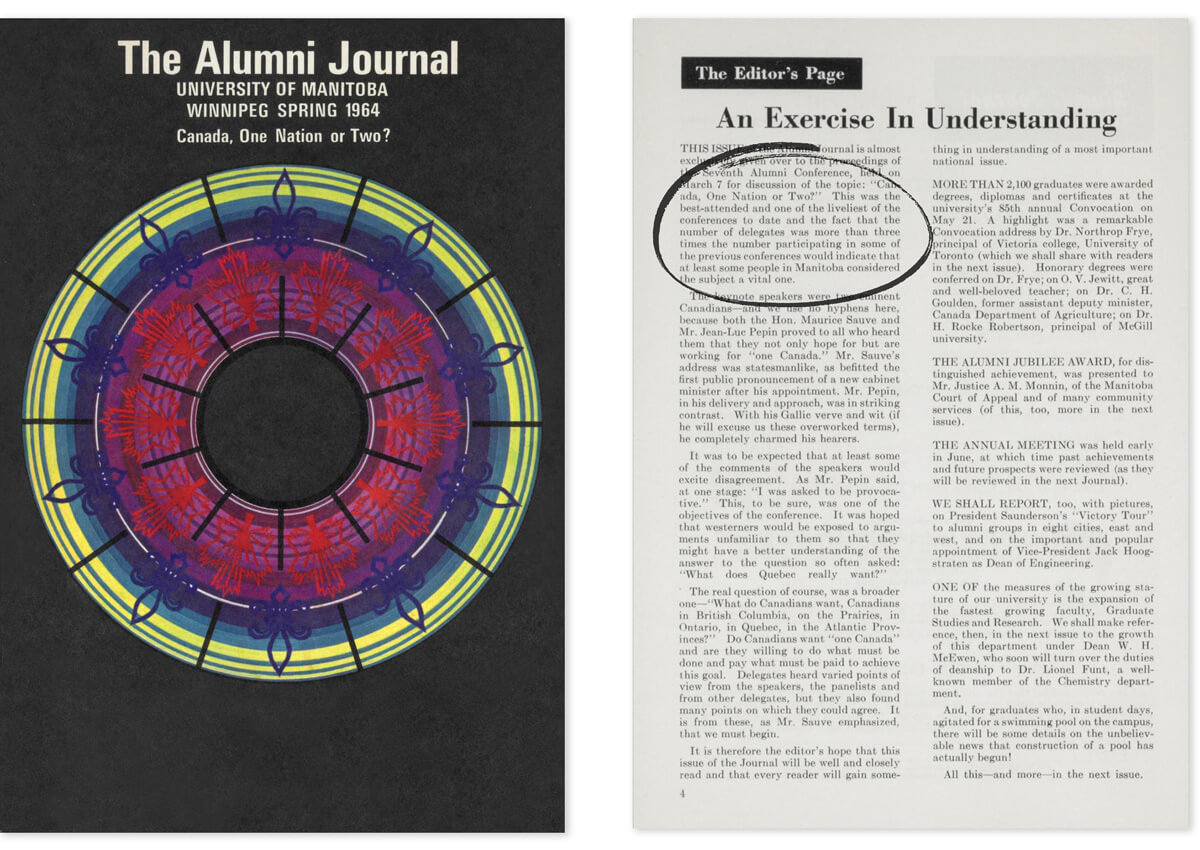 FRONT PAGE This spring 1964 cover teased the Seventh Alumni Conference set to tackle Quebec separatism with the title: “Canada, One Nation or Two?” The entire issue was devoted to the debate.

EXCERPT This was the best-attended and one of the liveliest of the conferences to date…. It is therefore the editor’s hope that this issue of the Journal will be well and closely read and that every reader will fain something in understanding of a most important national issue. 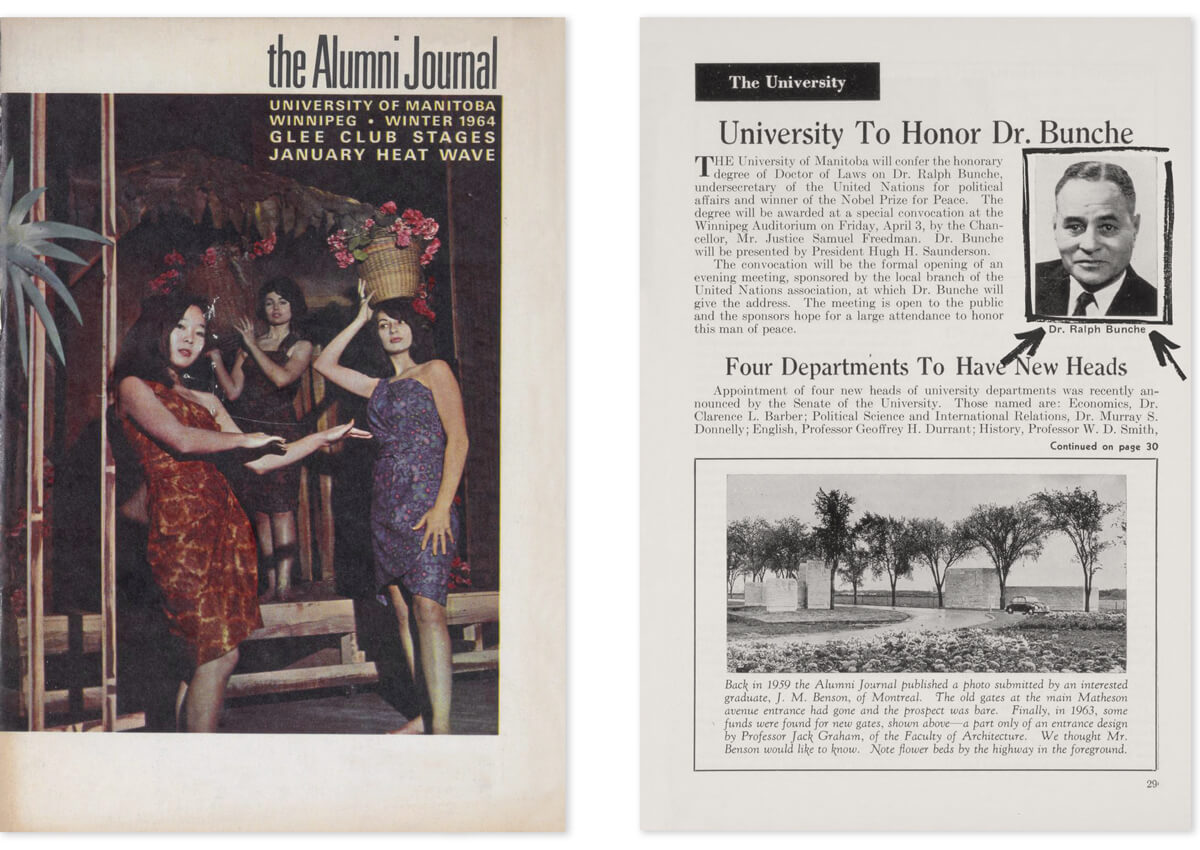 FRONT PAGE Members of the Glee Club struck a pose during the final dress rehearsal of their production of South Pacific for the winter 1964 issue.

INSIDE On April 3, UM welcomed Ralph Bunche [LLD/64] to campus to receive an honorary degree. Bunche, then the undersecretary general of the United Nations for political affairs, was the first African American to be awarded the Nobel Peace Prize—in 1950, for his role in arranging a cease-fire in the Middle East. 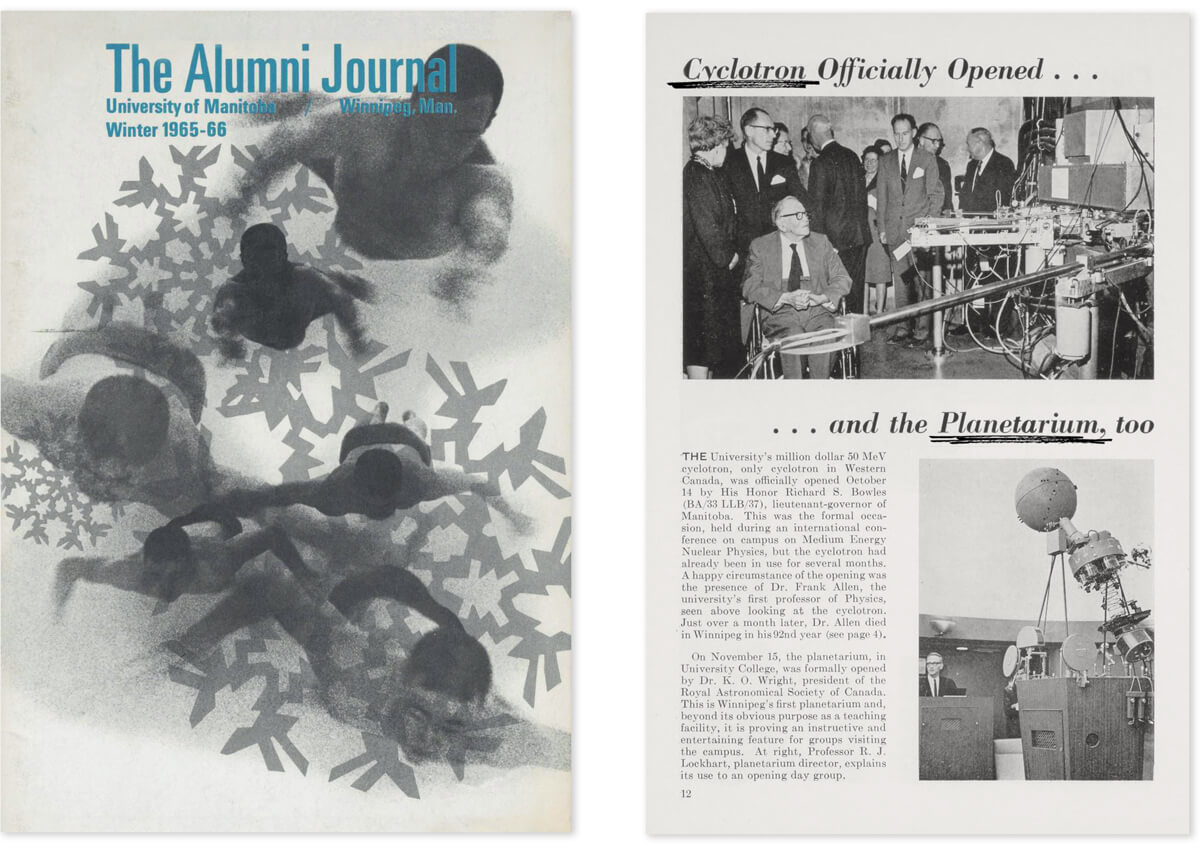 FRONT PAGE This winter 1965-66 cover was designed by Leo Simoens [Dip Art/62, BFA(Hons)/74] with photography by Henry Kalen [BArch/57] “of underwater figures” in what was then UM’s brand-new swimming pool. Now named after Joyce Fromson, the pool was built for $550,000 and coveted a unique special feature—an underwater, instructional window.

INSIDE In addition to the pool, the UM community was also celebrating the opening of a campus planetarium—Winnipeg’s first—and the arrival of a million-dollar cyclotron in the physics department (the only instrument of its kind in western Canada).

FRONT PAGE This summer 1977 cover featured an oil self portrait of L. L. (Lionel LeMoine) FitzGerald [LLD/52], purchased by the Alumni Association for the permanent collection in the School of Art. Within a few years of FitzGerald’s appointment as principal of the School of Art in 1929, he caught the eye of the Group of Seven and was granted membership to the prestigious collective.

INSIDE A small blurb on page 15 announced the election of Isabel G. Auld as the ninth Chancellor of the University of Manitoba. The story lists her volunteer work—from her involvement with the Mount Carmel Clinic to the Environmental Council of Manitoba—but no fanfare that she was the first female to be appointed the role. Only one other woman, Chancellor Anne Mahon [BHECOL/87], has held the honour since.

The much-loved editor of this issue of the Alumni Journal and many others was Laird Rankin [BA/62, BComm/64]. He would go on to become the publisher of The Beaver magazine and the founding executive director of Canada’s History Society. An acclaimed author of several books, Rankin wrote his own obituary before his 2017 death.

I have loved and been loved. I have been given much and I have given something in return; I have read and travelled and thought and written. I have had intercourse with the world, the special intercourse of writers and readers. Above all I have been a sentient being, a thinking animal, on this beautiful planet. And that in itself has been an enormous privilege and adventure. —Laird Rankin

CALLING ALL ALUMNI Do you have any old issues of the Alumni Journal or the University of Manitoba Quarterly? If so, UM Archives wants to hear from you. Please contact archives [at] umanitoba [dot] ca.

The University of Manitoba Glee Club

‘Would I Live or Would I Die?’
‘Recording our History’