The smartphone has replaced the rotary dial. Nanotechnology has overtaken steel. Renewable energies now compete with coal. A lot has changed—and yet, key aspects of society have barely budged since that historic year when the United Nations adopted the Universal Declaration of Human Rights.

“I think people will look back at our time as nothing more than an extension of the Dark Ages when it comes to the protection of the individual in the modern state,” says Jonathan Black-Branch, dean of the University of Manitoba’s Faculty of Law, and an international authority on nuclear non-proliferation.

In 1948, the world was rebounding from the Second World War but wary of a new, nuclear conflict on the horizon. There was optimism coupled with a sense of urgency to lay down ground rules.

Seven decades later, we find ourselves in uncertain waters. “We’re at a moment of moral and social crisis,” admits Adam Muller, a war and genocide scholar at the U of M. “People have looked at 70-plus years of human rights talk and they see a world that’s in some ways more chaotic and more dangerous than it’s ever been. They say, ‘OK, maybe this isn’t the right way to talk about these issues. Maybe we need something else.’”

That ‘something else’ is what the associate professor and his U of M colleagues have been working towards over the past eight years.

READ MORE Learn about the impact of the campaign at umanitoba.ca/frontandcentre

Thanks to Arthur V. Mauro, OC, OM, QC [BA/49, LLB/53, LLM/56, LLD/87], their plans are becoming reality. The Chancellor Emeritus envisions Winnipeg, Manitoba, as the next Geneva, with the university as its hub for research and scholarship. In December, Mauro announced a $5-million gift to endow a crossfaculty Chair in Human Rights and Social Justice.

“This city, to me, represents the best that people can do when good people come together with goodwill and seek solutions,” Mauro explains. “Over the years we have proven that reconciliation is better than discord, that diversity is a positive in society. The goal of this gift is to sustain and expand this Winnipeg model. Education and research are fundamental if we are to carry on what this city has become.”

Housed in the Robson Hall Faculty of Law, the Chair will consolidate existing research activities while forging connections and intervening in local and global human rights issues.

The Chair will also develop new advocates in Manitoba and beyond. A master’s in human rights (MHR) program is planned—a practice-based degree to prepare graduates for work in government and international organizations like Amnesty International and the Red Cross.

“We need believers—people adept at marshalling the languages and techniques of human rights, thought and practice,” Muller insists. For years, students have come to him asking for this type of program, and the U of M is well-suited to house this Canadian first. It’s already home to the Arthur V. Mauro Centre for Peace and Justice, the Centre for Human Rights Research, and the National Centre for Truth and Reconciliation—as well as a PhD and joint master’s program in peace and conflict studies, and the Canadian Journal of Human Rights.

“The university is not simply training professionals to become solid middle-class people. It also has a social conscience. It wants our graduates to do good for the broader humanity,” says Black-Branch.

He sees that same moral compass in students.

“We have a generation coming up that wants not just economic progress but social progress. Free trade has to be also fair trade; globalization cannot come on the heels of a few wealthy people becoming more wealthy; girls should be educated as well as boys, and to a high level.”

“It’s impossible to demonstrate fully the importance of Arthur Mauro’s gift and the positive influence it will have on many people, in a variety of ways, be it through policy considerations, grassroots decision-making, or legal processes and procedures,” says Black-Branch. “It is a wonderful thing he is doing for society.” 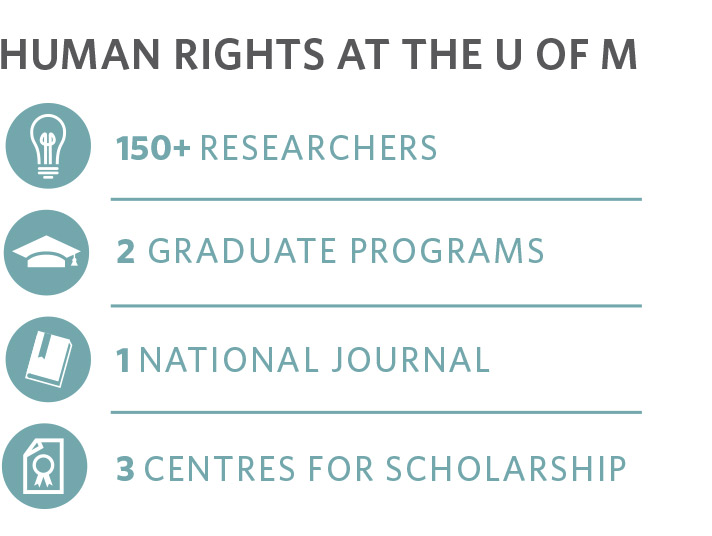 HUMAN RIGHTS AT THE U OF M

We are poised to elevate human rights on the world stage. Donors like Arthur Mauro have already established the groundwork, making it possible to attract top researchers and educate the next generation of advocates.