Walk with alumnus Mitch Bourbonniere, who knows that a life’s work is more than what we do for a living. He helped create the Bear Clan foot patrol so Winnipeg’s most vulnerable aren’t alone in the cold. From a career, he found a calling.

It’s just before 7 p.m. on a Sunday on Main Street when a young man emerges from the crowd outside a Winnipeg homeless shelter. He comes towards Mitch Bourbonniere to give him a hug.

“Thanks,” the young man replies, before hurriedly explaining he’s been at a shelter since his rooming house turned into a meth house and gang members moved in.

But things are looking up.

“I can help with furniture,” Bourbonniere says.

“Oh yeah, I lost all my furniture ’cause I couldn’t store it anywhere.”

“Yeah, I’m doing okay,” he tells Bourbonniere. “I’m reading a book by Russell Brand called Revolution… He used to be a drug addict, a heroin addict, and now he’s a Buddhist.”

“Phone me and we’ll go for lunch and I will help you out in any way I can, you know that, right?”

Bourbonniere is here with the Mama Bear Clan patrol—a group this social worker and University of Manitoba instructor helped create.

He is also a founding member of the original Bear Clan, 25 years ago.

On this cold January night, there are 19 volunteers in high-vis safety vests hauling two wagons of food, water, toques, scarves and mitts to hand out in Winnipeg’s homeless hub. 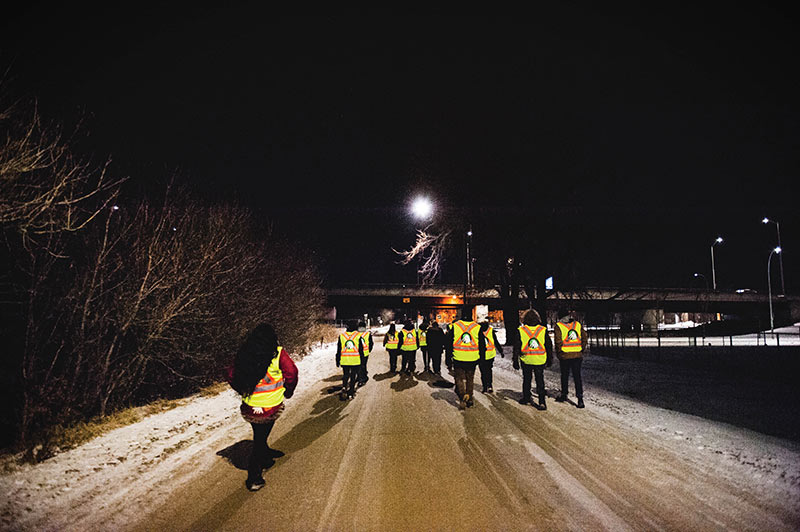 The guilt of privilege likely sits heavy for some volunteers as Bourbonniere asks if they’re warm enough. Before the night’s done, they’ll also patrol North Point Douglas, what Bourbonniere describes as not only one of Canada’s poorest residential neighbourhoods but also among its most authentic.

“I live in a lot of worlds, and in this world, people are pretty genuine,” he says.

Mama Bear headquarters is a women’s centre, where once a week there are meetings for “wounded” men—Bourbonniere helps with this group, too. Inside, a sign reads: Stop the Violence. Outside, a giant blue butterfly decorates the stucco.

Rewind one hour and this is where volunteers are greeted by Karen Thomas, the petite captain of the matriarchal group, built on the motto: “led by the women, supported by the men.”

She will walk at the front of the pack. But first, she burns sweet grass and says a prayer, telling everyone to “just feel the love, be the love, see the love.”

Bourbonniere issues a challenge to all U of M alumni to come join them, even for one night.

“If all the alumni came out just once, man, we’d have a lot of people all the time.”

Moments in, a figure with a backpack walks by and asks, “You got supplies?” He takes a Winnipeg Jets toque and scarf and calls out a Happy New Year before disappearing into the dark.

It’s milder than it was 10 days ago, when a young mother of four was found dead and frozen on Furby Street, not on this route. “That’s the kind of thing we could prevent, but unfortunately it didn’t happen here,” says Bourbonniere.

Beyond supporting the homeless, they look for the missing. Sometimes they find wandering kids, or lost puppies, too.

A car honks to show support as the mass moves past pawnshops and bars. They reach the Northern Hotel where Bourbonniere once held a vigil with the family of a man killed over a case of beer. Under the light of the sign, an inebriated woman with a black eye takes a sandwich and scarf.

Their leader, Thomas, tells her to take care. 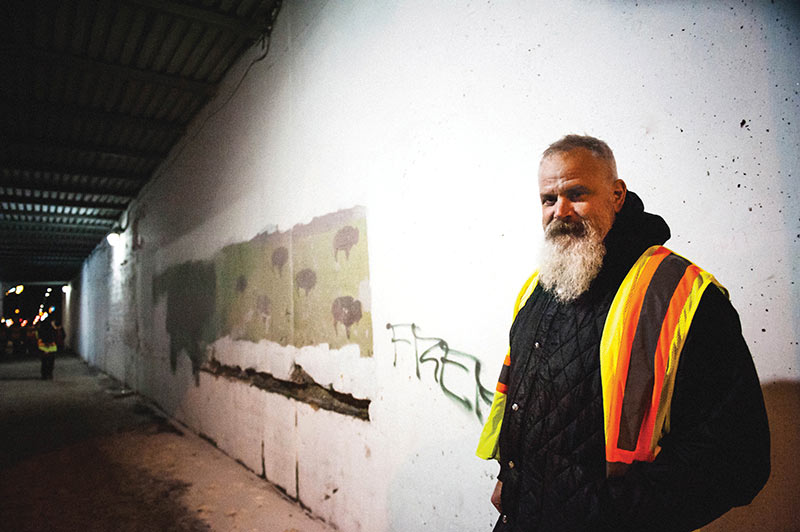 As a kid, he was told he had MBD, or minimal brain dysfunction. Little was known yet about attention deficit hyperactivity disorder—including his own, severe form—so Mitch Bourbonniere (left) says he felt like a kid who didn’t belong. He grew up French, Catholic and Métis; his dad ran a painting company and his mom was a teacher, and his staunch advocate.

“I had my own psychiatrist, psychologist, social worker—I had a little team, and I was always in need of adaptations. I was a bit of a going concern with behaviour. I started life a little bit as a consumer of help,” he says.

On his own time as a volunteer and through his private practice, he works with some of the city’s most vulnerable people, navigating everything from gangs to sexual exploitation. He also works as a social worker for the Louis Riel School Division and helps kids with extra challenges—and their parents—see their potential.

“I was them. They are me. I say, ‘Believe in yourself, you have gifts, you have strengths, you will find them.’”

Looking someone in the eye, calling them by their name—it means a lot, says Bourbonniere, who knows many of the people they’ll see tonight are struggling with addiction and mental illness, all on their own. “If everybody had an advocate, if everybody had someone looking out for them…”

Again and again, Thomas asks, “What’s your name?” “How you holding up?” “Got a place to sleep?”

Bourbonniere says the three shelters, located within a few city blocks, can get so overwhelmed that people will be sleeping on mats just inside the door. “They’re almost spooning.”

One woman declines a sandwich since she’s headed to Siloam Mission. Save it for someone else who needs it more, she says.

Outside Main Street Project, the 14 people waiting in line shuffle to keep warm until the doors open, not for another 10 minutes. This is where Bourbonniere, as a U of M student, first felt the pull to serve the community. (He interviewed the executive director for a school project and was struck by how fearless and real he was.)

Among the group tonight: a current student who sees social work less as a career and more “a way of life;” a teenage girl in the care of Child and Family Services, who at 14 would do her own cooking to hand out on Princess Street; and young men caught up in crime and working off their community service.

It’s healing through helping. “We call that lateral empathy, versus lateral violence—where people in the same circumstance turn on one another,” says Bourbonniere.

The group checks the property adjacent to an underpass that, come summer, becomes tent city. “There’s lot of nooks and crannies, lots of dark corners,” he says.

In the final push up Euclid Avenue, Thomas talks about how Bourbonniere is “all heart.” She shares the story about the time he came to the rescue of a teenage girl who seemed out of it. The girl fled and waded into the partially frozen Assiniboine River; Bourbonniere went into the water after her. He was trying to grab her but she wouldn’t come to him. She didn’t want to be saved.

He then pretended to be the one in trouble, acting like he was drowning. And it was the girl, Donna, who reached out for him.

6 comments on “One Night”