The little girl with the pink glasses and blue sweatshirt smiles back from a photo on the wall. It’s hung in Tamra Werbowetski-Ogilvie’s sixth-floor office, overlooking the treetops of the neighbourhood surrounding UM’s Bannatyne campus.

Alongside the framed photo are images of her own two children, including her daughter. She’s around the same age as this tween who was undergoing cancer treatment and who was connected to a foundation that funded Werbowetski-Ogilvie’s work in pediatric brain tumours—the deadliest of childhood cancers.

The Rady Faculty of Health Sciences researcher recalls chatting with the inquisitive girl on a Zoom call a year ago.

“Those are emotional meetings, you know? And I can’t get through them without crying. She was so thankful when I met her and just so happy that people were doing work,” says Werbowetski-Ogilvie. “It hits you. See? Already, I’m getting emotional.”

That’s why she opted for life as a stem cell biologist instead of a physician. Pediatric brain cancer became an obvious choice; it’s a discipline starving for discovery. This cancer is surprisingly rare in kids; it’s only been in the last decade that research in this specialized field has gained momentum, with advances in gene sequencing technology. But still, children’s cancers in general are “ridiculously underfunded,” Werbowetski-Ogilvie is quick to point out. “In the States, they account for less than four per cent of all funded research in cancer. And it’s the same everywhere.”

Roughly 1,000 kids are diagnosed with cancer in Canada every year, including about 50 in Manitoba. Around 10 of these children will learn they have a malignant tumour in their still-developing brain. A few of them will be diagnosed with a medulloblastoma tumour—the type Werbowetski-Ogilvie investigates.

“Parents don’t care how rare it is. They want to look for better treatments.”

She’s saying this just weeks before the prestigious journal Nature publishes what is possibly her team’s biggest findings to date. With collaborators in Toronto, Seattle and Tokyo, they pinpointed how and where aggressive types of medulloblastoma first appear—in pre-malignant form—during a child’s brain development, while still in the womb. Kids aren’t usually diagnosed with this type of tumour, known as group 4, until age seven, which suggests there’s a window of several years to prevent the cancer from ever happening.

Until now, group 4 tumours were the least understood, yet they require some of the most intense treatment. Up to 40 per cent of kids don’t survive.

Parents don’t care how rare it is. They want to look for better treatments.

With new clarity of which genes go awry and grow into tumours, clinicians could potentially detect these problematic cells before they turn into cancer—it’s the first time scientists have suggested medulloblastoma is preventable. They can also now develop better human cell models to test potential drugs to slow or stop its spread.

“With better models, we’ll actually be able to make some headway,” says Werbowetski-Ogilvie.

Brain cancer, she reiterates, doesn’t always get its moment in the spotlight. Greater attention tends to go toward unravelling the mysteries of leukemia, which affects the blood and is the most common cancer among children.

“In the leukemias it seems that there’s been better strides made in terms of survival rates. Whereas with brain tumours—especially for these really, really bad cases—current therapies are really not extending life beyond an extra couple of months and are so toxic,” she says. “We need to do better for brain tumours. And I think we are definitely moving in that direction.”

“We’re looking for the proteins on the surface of a cell as well as inside the cell that make those tumours unique,” says Werbowetski-Ogilvie. “And then we look for drugs that will target that unique signature.” That way oncologists can go after diseased cells while leaving surrounding healthy cells intact.

This shift in approach will redefine the future of cancer care by offering alternatives to radiation and chemotherapy, which simply goes after all dividing cells, healthy or not, she explains. A more tailored approach is especially overdue for kids since they suffer worse long-term side effects from conventional options.

“Trials and drugs for children cannot be lumped into what is given to adults. They’re not the same. Everything we know about childhood cancer is different: the mutations, the drugs they’ll respond to, how they will respond. We’re dealing with developing bodies, right? And so we have to think about how we treat these diseases in very different ways.” 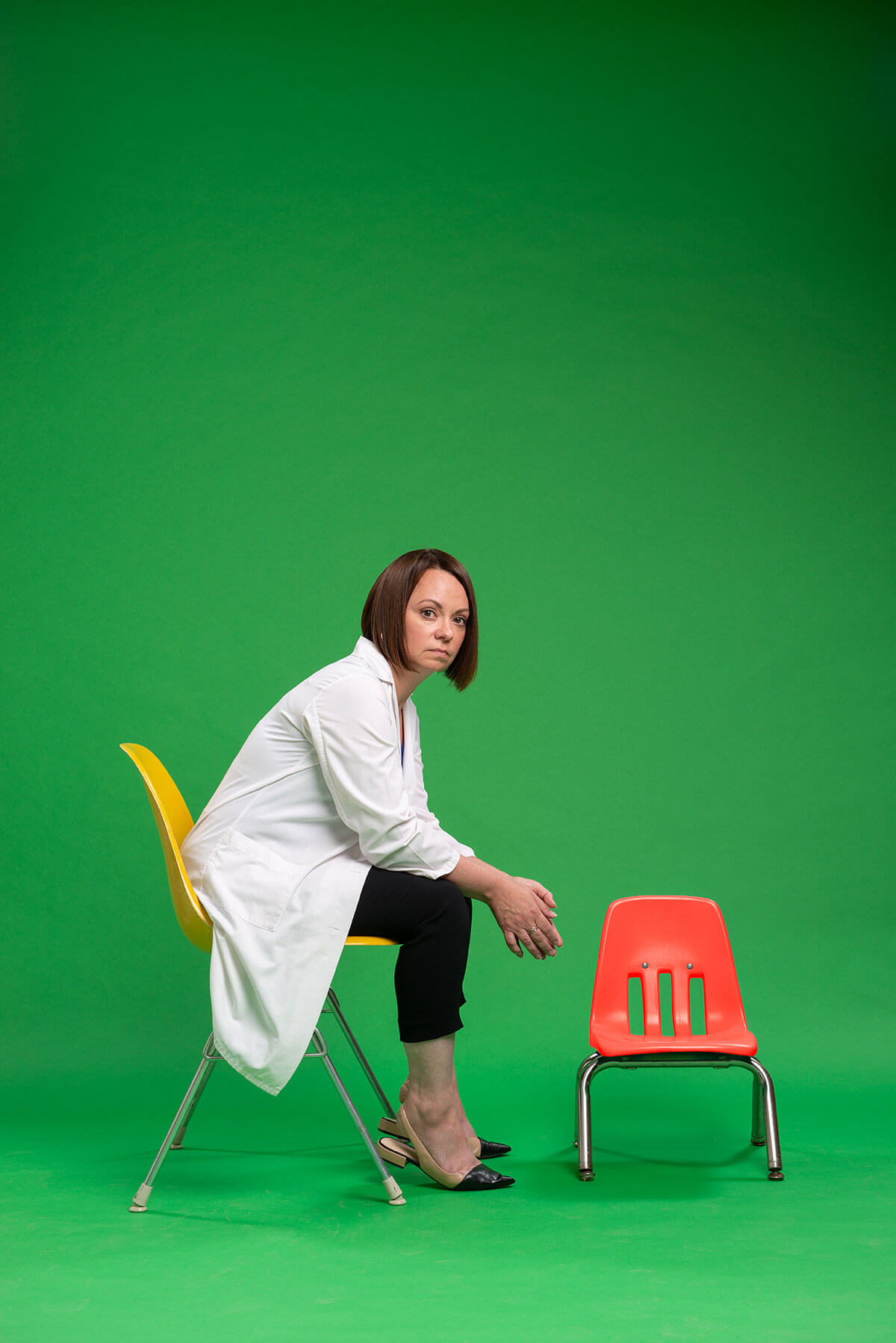 “This is where I’m meant to be,” says Tamra Werbowetski-Ogilvie, who held a Canada Research Chair in neuro-oncology and human stem cells for a decade.

She and her mostly female team—many of whom are mothers of young children—have spent years investigating another type of medulloblastoma—the sonic hedgehog brain tumour—which originates in the cerebellum. It was a postdoctoral fellow at Harvard Medical School, Robert Riddle, who first identified the protein behind the tumour’s growth. The protein belongs to the hedgehog genes. (Riddle raised eyebrows when he named it “sonic hedgehog” after the 1990s Sega videogame character.)

Werbowetski-Ogilvie set out to uncover a drug that would target this cancer and, in 2018, found that selumetinib slowed the tumour’s growth, as their hypothesis had hoped. But stopping the study there, Werbowetski-Ogilvie notes, would have been like plucking a dandelion from the surface rather than removing its root. So they pursued the possibility of a second drug—and serendipity stepped in.

Had COVID-19 closures in 2020 not shut down her lab, these experiments wouldn’t have been cut short, and her team wouldn’t have gathered data at the precise point that alerted them to just how fast not one, but a combination of drugs—selumetinib, along with pacritinib—was shrinking these tumours. “One model showed an almost 90 per cent reduction in the tumour’s growth. Over time, this translated to a greater than 40 per cent increase in survival,” she says. “You can just feel the excitement in the lab when a story is coming together and it’s all sort of clicking.”

Postdoctoral student Jamie Zagozewski [BSc(Hons)/09, MSc/12] remembers that moment well. “We were just blown away when we saw how much we could shrink the overall size of these tumours,” says Zagozewski, 37. “These parents are going through what I imagine is the worst thing in their entire life, and if I can have something to do with helping to ease that, that’s just incredible.”

Up until then, neither of these drugs had been tried on medulloblastoma—but since they have been used on other childhood cancers, approvals can come quicker, says Werbowetski-Ogilvie.

“I don’t like hearing the term, ‘It’s good enough,’” she says. “You have to stick with it and you have to keep putting in effort. Maximum effort.” 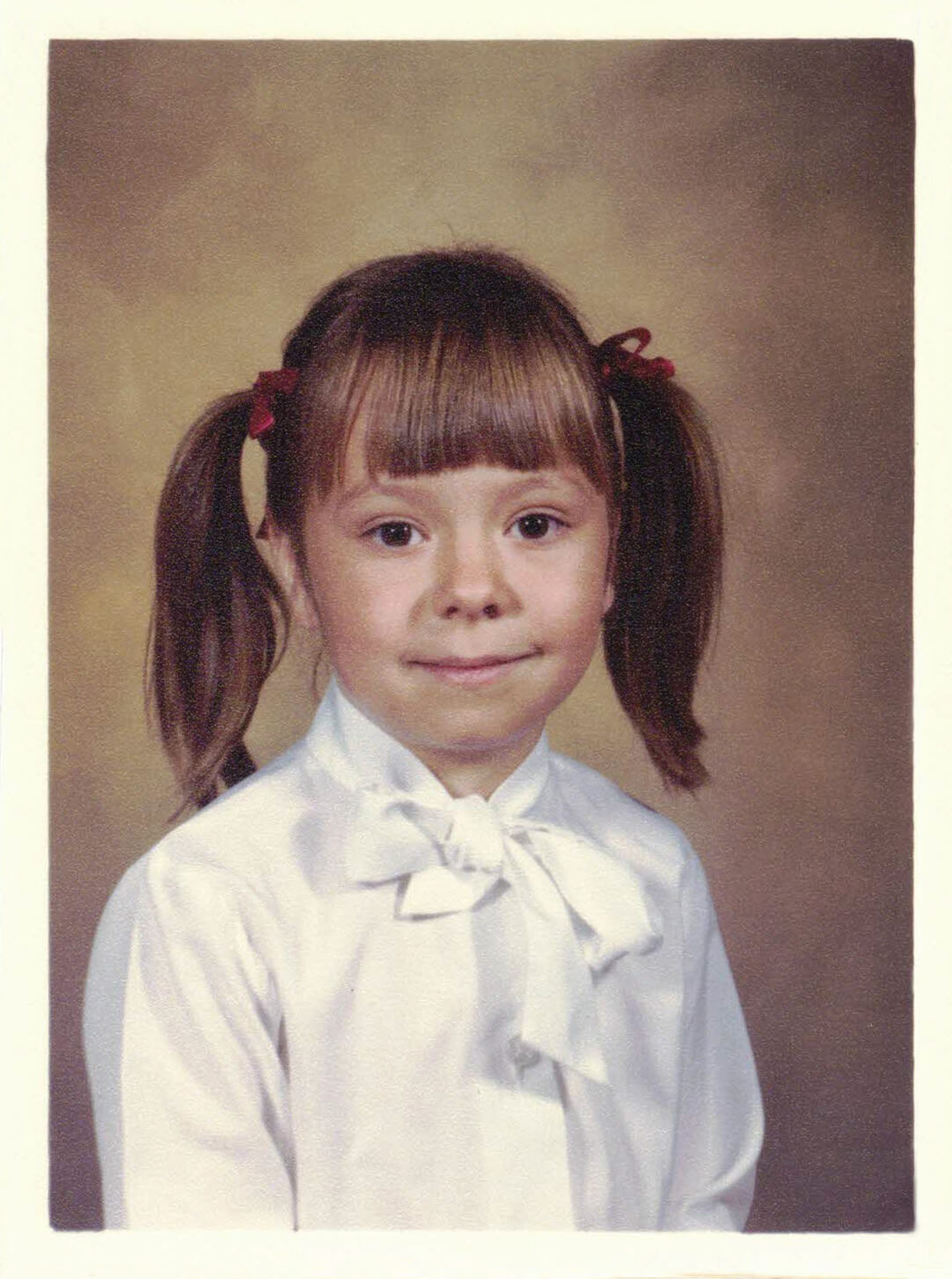 Biochemistry and medical genetics Prof. Tamra Werbowetski-Ogilvie grew up in Thunder Bay, Ont., changing diapers for her mom’s home daycare, and enjoying being around kids and their curiosity. Her dad, a petrographic technician who worked on asphalt and was known as “the rock doc,” would help her with her science projects with a go-to topic of—what else?—erosion. From there, she developed a passion for problem solving.

Finding new ways to treat brain cancer is especially complex since drug candidates must effectively reach tumours in this delicate organ. Many drugs are designed to not affect the brain, to not cross our blood-brain barrier, which protects toxins from getting in. Finding new, tailored treatments is made even more complicated since there are so many different types of tumours: 120 to be exact, according to the Brain Tumour Foundation of Canada.

Thankfully, in recent years, more affordable sequencing technology and an effort by the international research community to catalogue genetic differences among these tumours means scientists have a breakdown of genes involved in all forms of medulloblastoma. While this is extremely helpful, the data doesn’t speak to the behaviour of those genes and how they affect individual cells. It can be overwhelming to try to figure out which to narrow in on, admits Werbowetski-Ogilvie.

“When we get these large data sets, it’s our job to figure out which of these genes or proteins end up being functionally relevant. Not everything is,” she says. “It takes years to prioritize what to work on and figure out what our genes of interest actually do.” 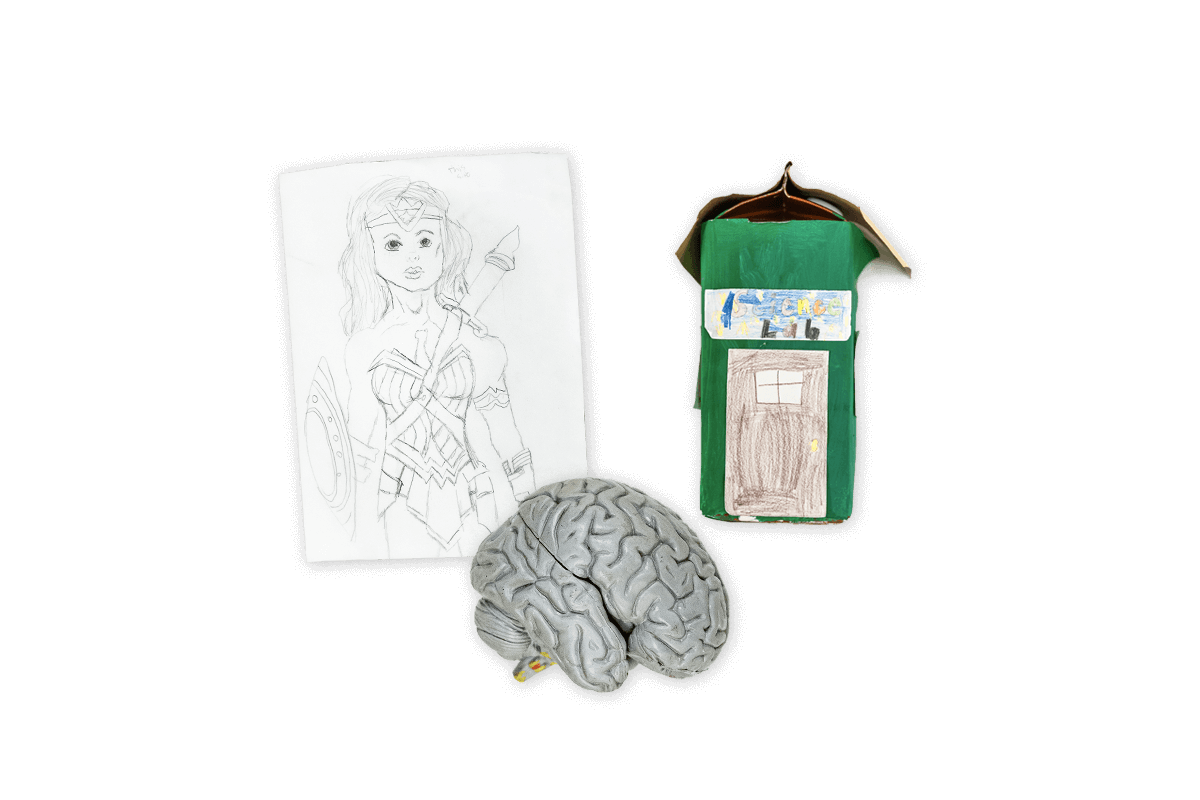 In Werbowetski-Ogilvie’s office, on her whiteboard, are old doodles by her son that have been there so long they won’t erase. On her shelf is an anatomical model of a brain, and a ‘science lab’ her daughter made out of a milk cartoon, along with a drawing she did depicting Mom as Wonder Woman—something her team placed prominently during a surprise makeover of the space.

“What I teach in my lab, and what I teach my kids, is perseverance,” she says. “With science, sometimes experiments don’t work, but you have to stick with it.”

That’s not lost on Zagozewski, who says it’s no small thing to be part of a predominantly female team in a STEM field, led by a researcher who’s both tenacious and nurturing. “Not only are we scientists but we’re friends and mothers, all supporting each other,” she says. “It’s not just a job—it’s more than that.”

DID YOU KNOW? Pediatric oncologist Dr. Norma Ramsay [MD/68], a 2021 recipient of a UM Distinguished Alumni Award and mentor to dozens of female researchers, also found her calling in the emotionally charged field of childhood cancer. A leader in stem cell biology, she headed the acclaimed Pediatric and Blood Marrow Transplant Program at the University of Minnesota, improving mortality rates. And if treatments failed, she’d often drive to hospitals, no matter the time of day, to be with children in their last moments.
War from Afar
Soil Seeker