The concept: Bring together students from across disciplines, post-secondary institutions and regions of Manitoba to build their leadership potential.

The new President’s Student Leadership Program launched last year at UM and is a key offering of the James W. Burns Leadership Institute, made possible by a combined $12-million gift from Canada Life, IG Wealth Management, Power Corporation of Canada, and their respective senior executives.

It began with an intensive core week where 27 students took part in workshops, listened to influential speakers, and divided into groups to work on a social change project, which they’ll complete over the coming year.

Here’s what they’ve learned so far from the experience—and from each another.

Steele (1) used to make $36,000 a year as an oilfields worker and now scrapes by on $7,500 as a nursing student, but says the trade-off is well worth it. With plans to shape culturally-safe education, patient care and policies in Manitoba, Steele insists, “I want to be someone who makes those changes.”

What Steele now knows about leadership: It’s not a genetic inheritance but a set of attributes that align with the sacred teachings of Anishinaabe and Nêhiyawak nations. Humility, and listening to all viewpoints, are paramount. “You have to welcome the voices you don’t want to hear.”

A leader in Steele’s life: Grandmother Karen Bird (2), who helped raise Steele and four siblings. “She sacrificed everything to make sure we were fed.”

Other leaders Steele admires: Indigenous teen activist Autumn Peltier (3), who addressed the UN General Assembly on the issue of clean water; and Indigenous educator Leah Gazan (4), recently elected MP for Winnipeg Centre, who has pushed for policies to reduce violence, poverty, addictions and homelessness locally and across Canada.

A “colleague-to-colleague moment that was really important,” recalls Steele, was a discussion with classmate Amy Jackson (5) about how traditional culture helps define a person’s identity. 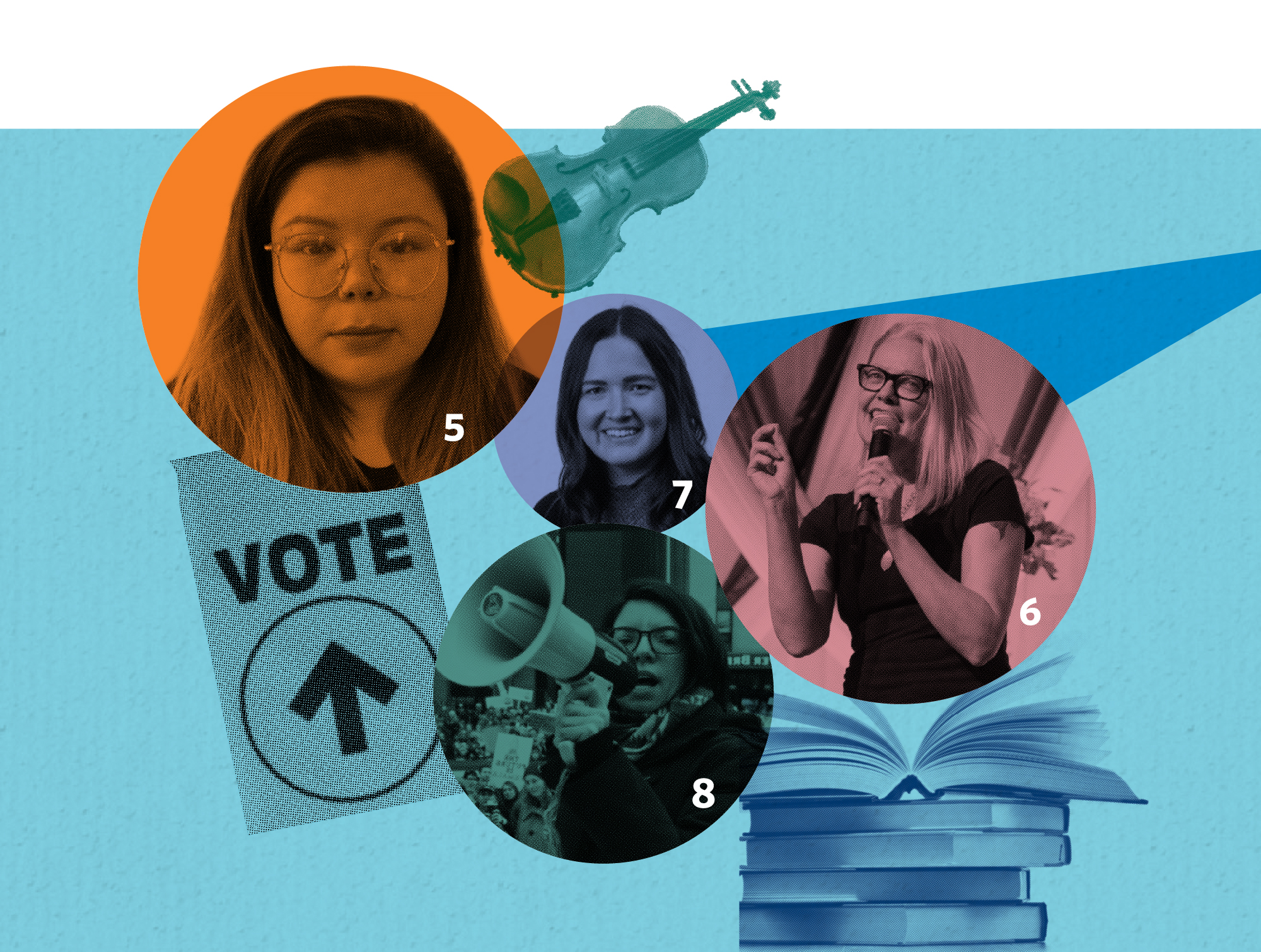 History student at University College of the North and avid fiddler

The daughter of a Residential School Survivor, Amy says life was rough growing up on Opaskwayak Cree Nation in northern Manitoba. Even now, living across the river in The Pas, she sees the “harsh realities” around her every day. Her goal is to create social change through education—teaching Canadian history that is “accurate and real.” “I believe, with the proper education, people will be more open to one another and be able to embrace what is Canada today.”

Her thoughts on the leadership program so far: “It’s been eye-opening and exciting to meet people from different backgrounds, different disciplines, with a similar vision. Ultimately, we all want to make a difference.”

Whom she has learned from: Former CBC producer Cate Friesen [BMROT/84] (6), who spoke to students about the power of story in moving people to action. And classmate Katherine Davis [BA(Adv)/11] (7), an MBA student at the I.H. Asper School of Business, who has an “incredible way” of articulating and delivering questions. Jackson says, “I’ve learned the value of asking both difficult questions and meaningful questions.”

A leader in Jackson’s life: Niki Ashton [BA(Adv)/04] (8), MP for Churchill-Keewatinook Aski, with whom she worked for several years, and who remains a good friend. “She’s unwavering in her authenticity of who she is and what she believes in.”

What Jackson now knows about leadership: It’s less about being officially recognized as a leader than it is about leading through example.

I got this.
Faculty, staff and retirees give $5.9 million