On a Saturday in 2004, with his lips pursed around carpentry nails, the UM computer scientist cocked his head back and hammered cedar planks to the ceiling of his Gimli cottage. He coughed. Some nails fell into his mouth. He spit them out but was uncertain how many he began with. He felt nothing odd, but feared he swallowed one.

At the local hospital, x-rays showed an inch-and-a-half finishing nail glowing in his lung near his heart. He drove to Winnipeg for surgery the next day.

“[Health Sciences Centre] just so happened to have a specialist there, someone connected to the U of M who was conducting research on non-invasive chest surgeries. She was going to get the nail out using a fiber optic scope and a magnet.”

The surgeon performed the operation in a theatre. Students crammed in to watch. Even the janitor looked on.

“She found it, and all I had was a scratchy throat for a few days. And it was because of this U of M research that it was largely a non-event.”

Fast forward to a summer weekday in 2019. Anderson [BSc(Maj)/87, MSc/89, PhD/95] was at a nursery browsing for flowers when he dropped to the ground. He awoke six weeks later remembering nothing, having suffered a ruptured brain aneurysm. His mom had survived the same condition just the year before. Having access to high-tech medicine made all the difference, he says. “If this were 20 years ago, we both would be dead.”

“The university brings a whole collection of people to Manitoba that we wouldn’t otherwise have. So, specialists in non-invasive brain surgery, and vascular surgery experts, and all kinds of people that allow us a broader, richer quality of life than we would otherwise be able to afford,” says Anderson, who is among the hundreds of faculty who donated to the Front and Centre campaign.

“There was an element of self-interest in giving: anything that improves the U of M indirectly improves my life.”

Can a robot be grateful?

Yes. Anything can be programmed, John Anderson says. He develops artificial intelligence systems and robots that cooperate to complete tasks like putting out exceptionally dangerous fires.

Programming emotions into robots makes them better at their jobs, he says. Think automated customer-service desks: empathetic software will register emotion in your voice and adapt accordingly. 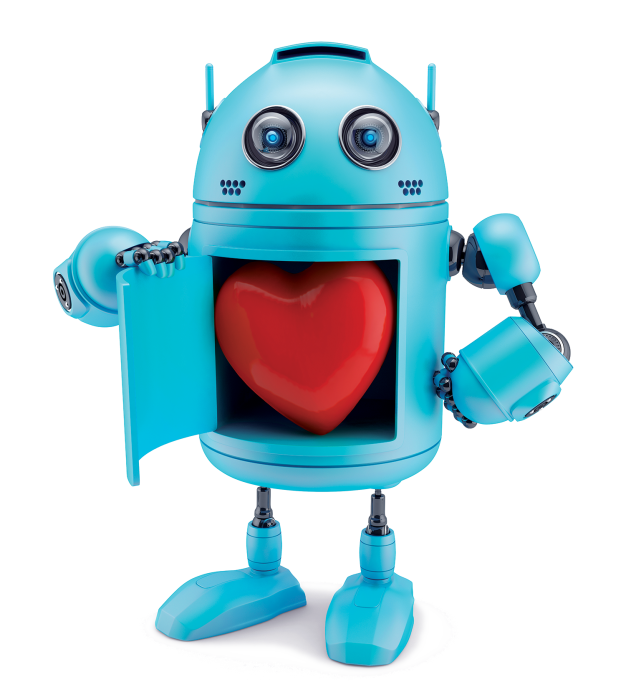 So, if a robot was programmed to show gratitude—or any emotion—would that be genuine?

“There will be people who will discount the word ‘genuine’ because this emotion isn’t in a human or something biological. I would say that just because something isn’t implemented in meat, doesn’t mean that you want to discount the possibility of it existing.”

After all, what is a brain, but a computer?