They bring idealism and passion—and they’re driven to amplify the voices of others. The master of human rights program at UM is the first of its kind in Canada and among the few in the world.

“They come with idealism and passion. I can’t take credit for that,” says program director Kjell Anderson. “I certainly see them as activists and advocates. Some of them will probably go on to do international work and some will stay in Winnipeg and do things in the community, which is equally impactful.”

The focus of Kjell Anderson’s work is mass atrocities, but on his office shelf are two serene black-and-white photographs of his grandfathers.

One is a handsome Saskatchewan farmer of Norwegian descent who inspired his mother to name him Kjell (pronounced “Shell”). The other is a reporter in a busy newsroom, the grandfather he never met, who covered the International Court of Justice in The Hague for The New York Times.

“If I think back to the papers I wrote—they were almost always on something I would consider a situation of gross injustice,” he says.

In his mid-20s he contacted an NGO in Rwanda and began working with victims of sexual violence and torture.

“That experience made me wonder more about the perpetrators. Who did these things to these people? I felt I had to find out, which also led me to my PhD,” he says. “I went to the official memorial service at the National Stadium in Kigali. People were recounting stories of what happened to them, really atrocious stories…in a literal sense, unimaginable stories.”

He recalls people breaking down and having to be carried out.

“That was intense. Obviously it made an impression on me.”

Anderson wrote a book about genocide perpetrators and is working on a second about a Ugandan child soldier. He has taught courses on genocide in Rwanda and in Germany’s Belsen-Bergen concentration camp.

One of his current global concerns is northern Iraq where he recently interviewed victims of the Islamic State. “I was interviewing women who had, a week ago, literally, escaped from slavery,” Anderson says.

Closer to home, he feels the urgency for Canadians to shift “a fundamentally colonial way of thinking about Indigenous Canadians.”

“I think that’s slowly changing but there’s been such a long history of marginalization and dispossession.”

He tells his students, “There are always going to be people who resist challenges to their own power, including us, by the way. We also have to be reflective about our role.”

A farmer in Tatamagouche, N.S., with a degree in international relations, she first felt the pull of social justice at 16, during a Maritimes-Guatemala solidarity trip to Central America. “I went to visit women’s co-ops and coffee-producer co-ops and spoke with genocide survivors. It helped me decide: What I wanted to do with my life was do work that supports and uplifts people from a grassroots level.”

Azubike is Igbo, born in Aguluezechukwu, a small town in Eastern Nigeria. He was raised in a Christian family by school-teacher parents, alongside four brothers. He later lived in Lagos and Abuja, the former and current Nigerian capitals. “My grandfather was a surgeon. He actually treated people for free. I have always said that if I end up being a lawyer, I will take up all the human rights cases for free.”

There were few clues Jessie MacInnis would become a farmer.

She grew up in Halifax where her mom was a speech pathologist and her dad, a land surveyor.

MacInnis, a self-declared “scholar-activist,” would not only farm but lobby UN delegates in New York on behalf of the rights of small-scale farmers worldwide and address the Food and Agriculture Organization of the United Nations in Rome—all before her 29th birthday.

Her introduction to small-scale farming—which is organic, uses very little land, and is often done with hand tools rather than expensive technologies—was a sustainable development program in Havana, Cuba.

“Farming on the small scale feels like such a political act. What made me stick with it is I can feed communities and also have a positive impact on the environment,” MacInnis says.

She became involved with the National Farmers Union and joined an international social movement, La Vía Campesina, Spanish for “the peasants’ way.” Globally, La Vía Campesina represents about 200 million small-scale farmers, or “peasant farmers,” as MacInnis says the organization calls them, in 182 countries.

The issues at the forefront? Food sovereignty and giving smaller producers, as well as consumers, more say in policies around global food production; a producer’s right to save, use and sell their own seeds (some plant varieties are now owned by corporations); and a shift to reorganize food production to better support local economies and reduce reliance on imports.

“It comes down to the right to food, but more specifically, who should be defining what the right to food looks like,” MacInnis says. “That’s what my research looks to examine—how grassroots organizations, and peasant farmers themselves, are attempting to redefine the food system in line with human rights and principles of food sovereignty. The right to food shouldn’t look like corporations doling out food supplements internationally.”

Last winter she spent two weeks in New York, lobbying for the UN Declaration of Peasants and Other People Working in Rural Areas, adopted by the General Assembly last year. In May she was part of panel sessions about the future of food and its security at the launch of the UN Decade of Family Farming in Rome.

“The number of incredible people I’ve been able to meet attending these events is really great,” says MacInnis, who first learned about the human rights master’s program from a UM professor at a farmers’ conference.

“It’s incredible for me because I have the opportunity to play a scholar-activist role in my organization, but the program is also a great foundation for the knowledge I need to do my research and to make sure my research is applicable to the people I’m trying to serve.”

Not only did donors make the master of human rights program possible, but they also created new student awards. Chancellor Emeritus Harvey Secter [BComm/67, LLB/92], Front and Centre honorary chair, and Sandra Secter established an endowment fund that will benefit future advocates for years to come. 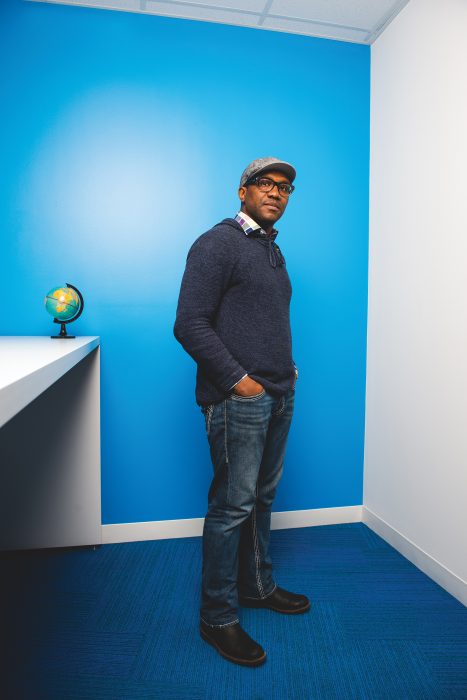 Nigerian-born Nwora Azubike came to UM to study human rights, but already he’s received accolades from the government of Ghana for his exceptional advocacy there as an undergrad student.

A report Azubike wrote on a flooded-out slum in Accra, the nation’s capital, stopped the government from leveling the shanty town and leaving 79,000 people homeless. He was a student pursuing a degree in human rights and human diversity at Wilfrid Laurier University in Waterloo, Ont., on a three-month internship in Ghana in the legal department of the government’s human rights commission.

Azubike had gone alone to Old Fadama, or “Sodom and Gomorrah,” as the crime-ridden district was nicknamed. He listened to people’s stories of poverty and desperation. At one point, the federal government sent in bulldozers and troops.

“They were violating people’s right to adequate housing, to life, to the pursuit of happiness—positive rights. The right to education and health, which the government owes them—economic and social rights.”

The government pulled back, in large part thanks to Azubike’s fervent activism.

Next, he wants to use his law degree to focus on the rights of children, particularly those caught up in human trafficking in his homeland. “Nigeria has 203 million people. Right now, 62.49 per cent are between zero and 24 years, so Nigeria has more young people than old people,” he says. “Children’s rights is a big issue.”

While Azubike was born after the 1967 Nigerian Civil War, he says his concern with human rights grew out of that conflict. The war between the Republic of Biafra—home to the Igbo people—and Nigeria’s military government caused a famine that claimed more than a million lives.

The war taught him that acceptance and inclusion are two of the most important human rights.

“That is the right of personhood,” Azubike says. “If you don’t see somebody as a person, then you begin to also have some mixed feelings about what rights they should have as a person.”