As the nation marks a big birthday, the Queen’s representative in Canada—one of a select 28 since Confederation—wants to know what your gift to this country will be.

At a spry 75 (and with 42,000 Twitter followers) he poses the above question coast to coast, insisting we think about Canada in ways we haven’t before: What’s working? What isn’t? And what are you going to do about it?

No stranger to advancing important conversations, Governor General David Johnston is also a lawyer who’s called for a more caring justice system, an academic and university president (of Waterloo) who’s pushed the power of digital technologies and a hockey hall-of-famer from his Harvard days who’s spoken out against violence in Canada’s sport.

In his latest book The Idea of Canada: Letters to a Nation, his Excellency shares letters he’s written to people who’ve influenced his patriotic journey—from history-makers to a little boy in Nunavut—revealing a candid portrait of our country.

PRESIDENT DAVID T. BARNARD: If Canada has a personality, how would you describe it?

GOVERNOR GENERAL DAVID JOHNSTON: Our personality, I think, is one of being an inclusive country that reflects the diversity in the world. It works well. And that is an experiment that continues. John Buchan, Canada’s Governor General from 1935 to 1940, in a speech in 1936 or 37, spoke about Canada as a vast country with so much promise but the challenge was the divisions in the country… The separateness of the country… The fact we were different communities and the challenge of developing from that diversity, a unity. I think that this has since happened. And I think our noble experiment has shown that diversity can not only work in terms of harmoniously living together, but also in terms of providing a basis for creativity. As Governor General during a milestone for this country, I think it’s about connecting, honouring and inspiring Canadians, to get people together to celebrate what we stand for and also build something for future generations.

You’re well known as a person who writes powerful letters. What’s the appeal of letter writing?

I typically write letters first thing in the morning. I come in with some ideas that I’ve had overnight or from events that I’ve been at and I usually do a letter or two or three to say, “Thank you for what you’ve done, so-and-so,” or to compliment someone who’s done an important service. As our daughters went away to school—we have five—I would write to them each morning. And in the days before electronic communication, I would do one letter and then photocopy it! And for each of the five, at any one time, one or two would say, “There goes Dad blathering on again,”and it would end up in the waste basket. And one or two of them would read them and would find it interesting. And one would find it very meaningful at a particular time, but that daughter would change each time. For me, the writing of letters is a way of crystallizing your ideas that then kind of ferment for the rest of the day. And so I translated that into this book, which really comes from reflections about Canada as I have often seen it in the morning letters.

You’ve also been a person, in your previous incarnations, very highly connected to universities that were driving technology forward.

I’m very interested in the digital revolution, which is so much more profound than the printing press, which took 300 years to reach—and ultimately transform—a majority of the population of Western Europe. Whereas the Internet from 1995 to 2005 took less than 10 years to reach the majority of the world’s population. We live in an era of exponential acceleration…and our big challenge is how we harness that and manage it.

As a lawyer, my writing has been in the areas of economic regulation but also communication law, cyber law, modern communication and how you can harvest that digital revolution to improve the human condition. In terms of people involved in learning and education, we’re at the greatest time in history because, number one, we as teachers are no longer the fountain of all knowledge. Number two, we no longer have the responsibility of being this store of information that we kind of spout out. Our students have so much more access to information than we could ever provide in a lecture. So how do we adjust our teaching to do that and help our students to ask the right questions or to move from data to information to knowledge to wisdom? To see that the computer at this point can provide all of the answers but none of the questions? But with artificial intelligence we are getting to the questions. That ability to frame the right question becomes such an important part of how we learn.

You mentioned in your book a young boy who asked you the question “Who are you anyway?”and Senator Murray Sinclair [LLB/79, LLD/02], who is an alumnus of ours, in the aftermath of the Truth and Reconciliation Commission, poses the question “Who am I?” Do you think as Canadians we ask ourselves this enough?

The story of the young Inuit lad, who was nine, comes from Repulse Bay. We arrived there early in the morning and it was a day of events with this village of 700 or 800 people. They were running a Terry Fox Run that day. The most northern Terry Fox Run in the world. At the starting gate—I was starting it officially—this little boy came up and patted me on the shoulder and said, “Who are you anyway?” “I’m the Governor General of Canada.” “What’s your name anyway?” “Well, my name is David.” “Well David, how old are you anyway?” “I’m 70 years old.” “70 years old! I didn’t think anyone could get that old!” So we finished the race, I found the little guy, I put my arm around his shoulders and I said, “Not dead yet anyway.”

The boy asked who am I beyond the particular job that I held. That got me into some fairly uncomfortable burrowing of the soul and examination of myself. But I think out of that came my realization that at some point in your journey—and with any luck that occurs pretty early when you’re maybe 10 or 11—you begin to move from me to we. And when you make that transition, the world becomes a whole lot more interesting of a place, because if you’re self-absorbed it gets pretty lonely. 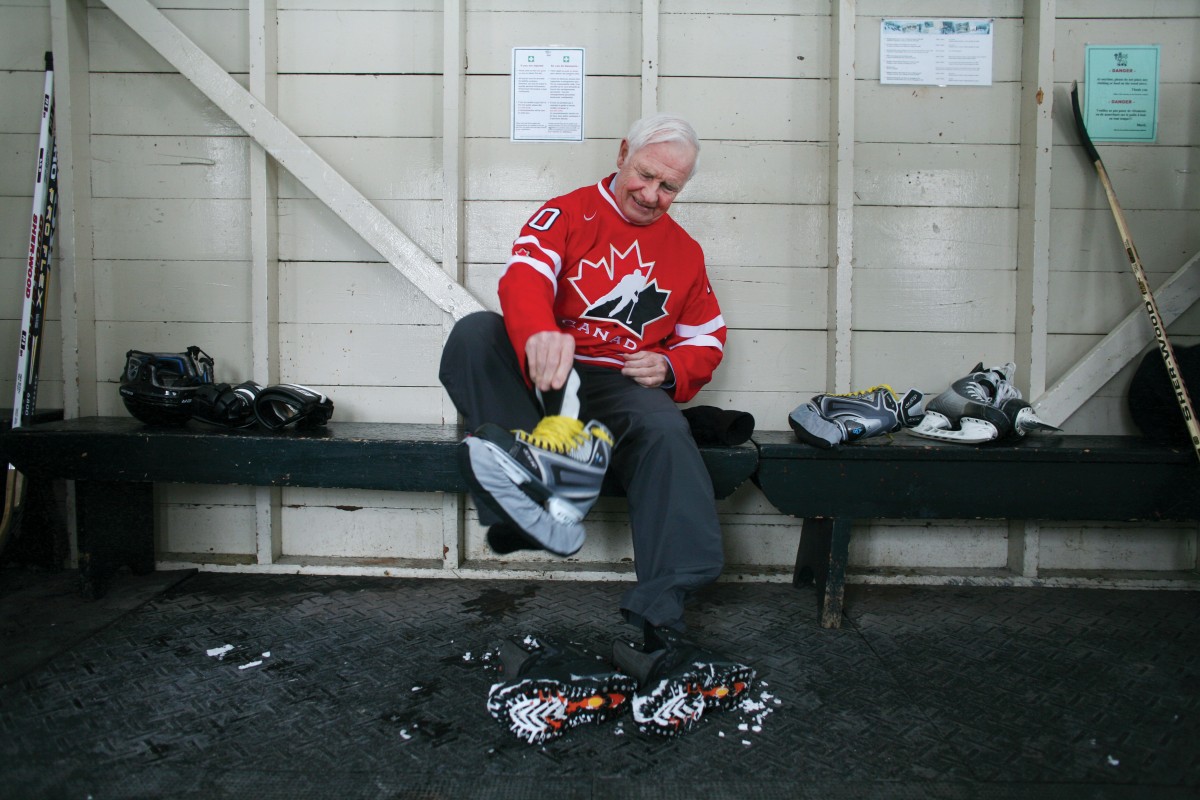 You’ve talked about education being the key to expanding opportunities for Indigenous youth, which is particularly a concern of ours given where we’re located. You’ve said that we need to think in terms of leadership, not management, when higher education engages with Indigenous realities. Could you elaborate on that?

I would simply make the University of Manitoba the poster child for the reconciliation journey. We need more Universities of Manitoba and the leadership, not management, that you’ve shown in so many ways on this. How do you replicate this across the country? I’d say education is the new buffalo for the Indigenous people. As we think about education for Indigenous people it’s: not about us, without us—that famous expression [that means those affected must steer the solution]. It’s the leader as servant and you’re serving the particular purposes of the community for which you are ‘the leader’.

Of all the things that are glorious and good about this country: I think it’s how hard we have worked at equality of opportunity. And public education has been such a fundamental element in this. Above all, it has been how we make diversity work because wave upon wave of immigrants have come to this country and—for the last 125 years at least—have had almost equal access to a good education system. And it’s no surprise that children of immigrants achieve higher levels of education than children of people who have been here for some generations. They’ve been able to take advantage of that. That’s a wonderful achievement of our country. But who are the forgotten people in that accessibility? It’s our Indigenous people, not simply on the reserves but elsewhere. And so for me, that is the most fundamental of all challenges for Canada over the next 10 years, and we do require more universities than Manitoba to provide the leadership.

As you think about that history and looking forward, what would you say are the biggest challenges we face?

Challenge number one is complacency. We have not had an arm raised in anger for 200 years. We’ve been largely protected and life has been pretty comfortable, so complacency would be point one. And I would take that then into the challenges that we’ve already mentioned: How do we be sure that equality of opportunity impacts all Canadians and not just 70 or 80 per cent? That’s a huge challenge. I think the second is, in a world of rapid globalization and a world of accelerated technological change, how do we keep our bearings to become an even smarter and caring nation? That’s not an easy task. 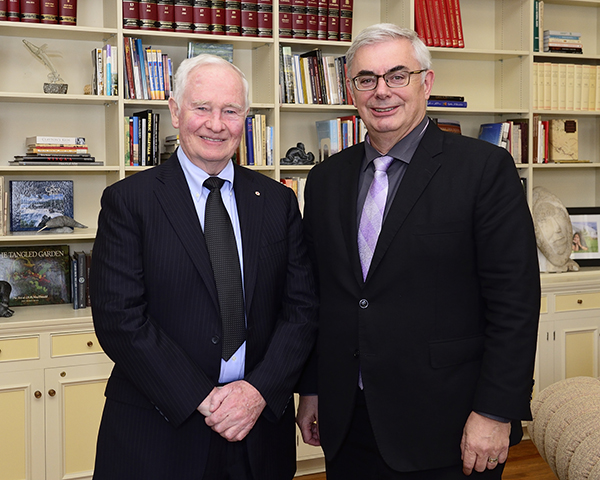 What would you say that those of us who are leading universities, and those who are attending them, need to think about, moving forward in this complacency?

The question is: What do we as educators do to create the right environment for our students? I guess we ask them—when [already] they have cars that have as their bumper sticker “Minds, like parachutes, work best when open”—to enhance open-mindedness. And I would say for Canadians, becoming global citizens is as important as becoming good Canadian citizens. And that means a real awareness of the world around. I’ve told the story of my five daughters who began international exchanges at age 12 and what an important part of their development that was because four things happened to them. One: they became more curious. They asked the question “why” in a little more informative way. Two: they became more tolerant in the best sense of tolerance—not just you’re different from me, but interested in why you’re different. Thirdly, their judgment becomes better because they’re very quick to avoid bigotry and half-baked truths and they look for the other side of the story. But most important of all, they become more empathetic, not just sympathetic. They walk in other peoples’ shoes.

I think that’s the way we prepare our young people to be more creative, more empathetic, to be able to look at things from different angles, and then to expect more of themselves than they even thought they had, to push their talents and their abilities to contribute even beyond what the mind may have marked out on a piece of paper if you asked them: “Who am I?”