Everyday people are turning into researchers and putting human behaviour on view for all to see‚ and scrutinize. How are these experiments—often delivered through social media channels—challenging everything we thought we knew about ourselves?

It’s a New York City subway ride like a thousand others. Commuters stand shoulder to shoulder, or sit and stare blankly at the ads above, all barely aware of the people around them. But today, on the L train from Manhattan to Brooklyn, something different is about to happen.

Jillian McDonald [BFA(Hons)/93] sits alone, quietly applying makeup. Not the kind put on before work or a date, McDonald is coating a layer of white paste to her entire face. Then, black around her eyes. The red of fake blood comes next.

And as she slowly transforms herself, the atmosphere in the subway car changes. People, jarred from their internal thoughts by the zombie emerging among them, cast sideways glances. Some keep their cool—pretending nothing’s going on—and some keep their distance. Others gawk through ‘what is going on’ expressions.

It’s a performance. McDonald is bringing art—and one of her favourite art subjects, horror—to an unsuspecting subway audience.

“I’ve always been fascinated with artwork in unexpected places, and in artwork that’s not obviously artwork, that makes you think about what you’re seeing and what you’re experiencing,” says the New York-based artist.

Creating an unusual experience and observing how people react also sounds a lot like what Dan Bailis, head of psychology at the University of Manitoba, considers the heart of social psychological research: the social experiment. “It’s about changing conditions and seeing what happens as a result of that,” he says.

Though not a social experiment in the strict sense, McDonald’s performance could’ve been had she wanted to, say, explore the hypothesis that people are less willing to sit beside a zombie during their morning commute. In that case, she could’ve conducted a series of tests by riding the subway with and without gory makeup, observing and recording the results, compiling and analyzing the data, before finally arriving at a conclusion. Something like: New York City subway riders are 28 per cent less likely to sit beside a zombie than they are a non-zombie.

If that sounds silly to you, then imagine replacing the zombie in this experiment. What if we instead explored how people reacted if she was a homeless or elderly woman, or of an ethnic background other than her own— perhaps Indigenous or Muslim. YouTube is bursting with viral videos from everyday people who have turned these thought experiments into social experiments, leading to larger discoveries about human behaviour.

“The most interesting and important feature of social experiments is that they reveal patterns of social influence and behaviour that the individuals engaging in those behaviours are unaware of, and that most people would never expect based on their own experience,” says Bailis, whose own experiments have explored the commitments and risks involved in goal-driven activities, such as exercise, academics and gambling.

In other words, social experiments often tell us more about ourselves than we think we know.

Like the Stanley Milgram obedience experiment, to use one classic example, that had ‘authority’ figures asking participants to administer electric shocks to other people.

This 1963 experiment showed us how cruel we can be when we are told by those in authority that it’s acceptable.

“It was like we’d turned on the bright lights at the bar at midnight.” Christian Rudder

Concepts that are now commonplace, such as the halo effect—how our bias leads to assumptions like, ‘He’s tall, so he must be smart!’—are also confirmed by social experiments. We know that people will agree with the majority, even when they know they are wrong. We know that people will behave better and tip more when they are being watched, even if it’s only by the gaze of a Big Brother-style poster. We know that groups bond quickly (us) and tend to mistrust, even hate, other groups (them).

And we know that people who receive a guaranteed paycheque whether they work or not, will still make a point of working.

These days, U of M economist Evelyn Forget travels internationally to talk about Manitoba’s great social experiment: the minimum guaranteed annual income project—aka Mincome. This government-led experiment that unfolded over a five-year period in the 1970s aimed to eliminate poverty by creating a utopia of sorts.

The landmark experiment zeroed in on three sites, including the small city of Dauphin, Man. The provincial and federal government wanted to know the economic and social outcomes for the working poor if they—those with incomes low enough to qualify—were given a basic minimum income.

Would they be less motivated to work? The answer: No. Yet a final report never surfaced, since government changed power, and the findings ended up in boxes to be resurrected and analyzed by academics in the years since.

Many believe that basic income is the answer, at last, to ending poverty, which may be required sooner than later as economists are predicting that artificial intelligence and automation technology will disrupt the workforce in a very significant way in the next two decades.

Mincome-like experiments are popping up in places like Ontario, California, Finland, Kenya and the Netherlands, to name a few.

Forget has looked at the Mincome findings through another lens as well. Does a basic income improve a person’s health? To no one’s surprise, it does.

“We end up paying for poverty one way or another,” she explains. “So, we either pay for it up front and provide people with the resources they need to live, or we come along behind with a big mop and spend a huge amount of money treating the consequences.”

Of course, not all social experiments are developed to revolutionize economic policy. In this DIY digital age, where everyone with an Internet connection can publish their findings, the term ‘social experiment’ has come to mean: “Hey everyone, look what happened when I did this social thing.”

Take, for example, Hadiya Roderique, a lawyer, writer and PhD student at the University of Toronto whose “Dating While Black” article in the March 2017 issue of The Walrus explored the results of a racially-focused social experiment conducted on matchmaking site OKCupid.

After posting her dating profile, Roderique, a multiracial woman, found that she was receiving very little interest. To test the theory that race might be influencing the low number of messages she was receiving, she changed her dating profile in only one way: She made herself white. In the first few days, she received nine times as many messages as she did when she was black.

“In order to find the kind of guy I wanted—to be seen by him—it seemed that the ultimate message was: I needed to be white,” she wrote.

Bailis says the appeal of social experiments lies in their unique capability to explore the ‘what ifs’—for better or worse.

“[In real life], it only happens one way or one time, and we don’t get to see what the alternative would have been,” he says. “[Experimentation] is the only way to know if something would play out differently.”

Meanwhile, OKCupid itself was able to confirm in one epic social experiment how predictably shallow we can all be.

They turned off all photos on their site for a seven-hour “Love is Blind Day.” Suddenly, people’s behaviour changed. They were 44 per cent more likely to respond to new messages. They were making deeper connections. They were talking more. Connecting.

But things changed quickly when people could finally see each other.

“It was like we’d turned on the bright lights at the bar at midnight,” founder Christian Rudder wrote on their blog. Dating is never easy, points out University of Manitoba psychology professor Jessica Cameron [BA(Hons)/98]. When she considers titles in the relationship help section of the bookstore, she notes that many create the perception that men and women are so opposed in their worldviews that they might as well be from, well, Mars and Venus.

“A lot of the message in these book titles is about how love is a game and how dating is a game,” she says. “I started to wonder how that actually influences people as they meet new people. Basically asking, is that a good message?”

So she decided to find out through a social experiment.

Cameron and her co-researchers exposed participants to “game-playing” dating book titles such as Secrets of the Game: How to Meet and Attract Women, and Player’s Handbook: The Nice Guy’s Guide to Getting Girls. They discovered that those who viewed book titles aimed at their gender felt less of that vulnerability so common to the initial stages of dating. Empowered. However, reading book titles aimed at the opposite gender increased a desire to avoid dating and instead focus on protecting from rejection. Essentially making them a little less sure of themselves.

A social experiment posted by a Hindi entertainment channel showed reactions to the staged‚ public harassment against women by men—or “eve teasing”—on the streets of India. The video got 3.7 million views and showed staggering complacency. At its worst (in Mumbai) 368 people did nothing and eight intervened. (below, first row)

A Danish TV station also packed an emotional punch with their social experiment challenging racism in Denmark. It begins with people grouped in stereotypical categories like the “high-earners‚” the thugs or “those we try to avoid‚” “the new Danes” and “those who have always been here.”

The groups meld when they’re asked to come forward under new categories‚ like step-parents‚ class clowns and people who love to dance. (below, second row) 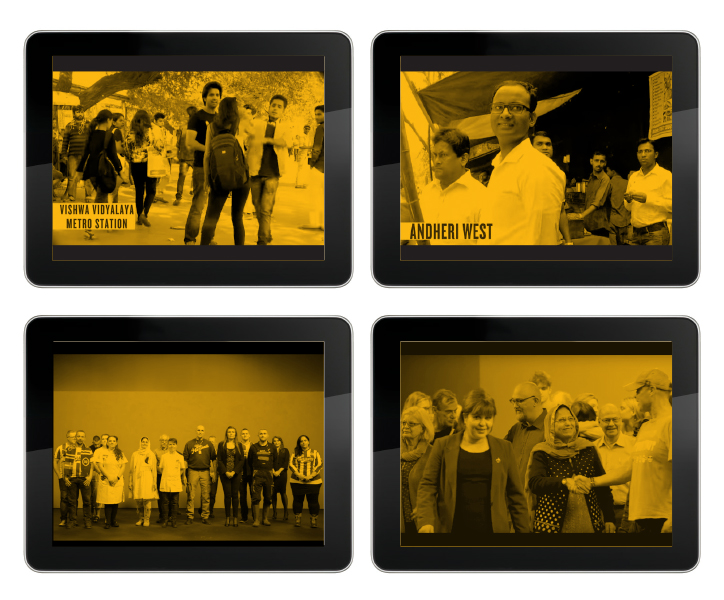 Brands have also joined the social experiment game with campaigns that seem to show real people reacting to real situations: women who realize that how they see themselves is not how others see them; people who are confronted with the recognition that “like a girl” is a demeaning addendum to running, throwing and fighting; and strangers whose perception of each other after chatting in the dark does not match the reality when the lights come on.

Dove, Always and Coca-Cola have elicited accolades—and tears—with these slick campaigns. Not surprisingly, however, these highly manufactured ‘experiments’ trigger scepticism for not showing the complete picture.

“Without a control, how sure are we that what is being suggested is really what is making the difference?” asks Bailis. Heineken’s recent Open Your World campaign brings together two people with opposing ideologies—for example, a feminist and a misogynist, an environmentalist and a climate change denier—encouraging them to work together to build a bar. Their views are not revealed until the bar is built, after which they are given the option of sitting together over a beer or walking out.

Given that it’s a Heineken ad, the choice they make is predictable.

Kelley Main [MA/98], head of the marketing department in the Asper School of Business, says brand-driven social experiments are not necessarily a bad thing, even if those experiments might not get a pass at the University of Manitoba. She sees them as conversation starters.

“Getting people to talk about important social issues is always a good thing,” she says. “But in the end it’s still an advertisement, otherwise they wouldn’t need to sit down and have a beer.”

Call it what you will, the campaigns are wildly popular because they resonate so deeply, like the best social experiments. They are revealing. Cutting through the layers to expose us to ourselves. Both the good and the bad.