More rain than snow will fall in the Arctic and this transition will occur decades earlier than previously predicted, a new study led by the University of Manitoba (UM) reports.

Projections from the latest models, published by an international team of researchers led by UM in the journal Nature Communications, show a steep increase in the rate and range of precipitation expected to fall in the Arctic, and that most of these future events will be rain. This shift is occurring due to rapid warming, sea ice loss, and poleward heat transport in the Arctic.

“There are huge ramifications of these changes, which we note in the paper, such as a reduction of snow cover, increased permafrost melt, more rain-on-snow events, and greater flooding events from increased river discharge, all of which have implications on wildlife populations and human livelihoods,” says lead researcher Michelle McCrystall, a postdoctoral fellow in UM’s Centre for Earth Observation Science in the Clayton H. Riddell Faculty of Environment, Earth, and Resources.

This transition to a rain-dominated era in the Arctic is forecasted to commence at different times depending on the season and region. In autumn, for instance, these new models predict the shift to occur between 2050 to 2080, whereas the old models predicted this to occur between 2070 to 2090. And in what could be considered a harbinger, as these researchers were preparing their report, in August of this year rain fell for the first time in recorded history on the highest point of the Greenland ice sheet.

“The fact that we’re getting rainfall on the summit of Greenland right now, and that we’re maybe going to get more rainfall into the future—it kind of staggers me,” McCrystall says. “And when we talk about this happening in 2100, it seems like such a long time away, but it’s only 80 years. That’s the next generation. And if we continue the trajectory that we’re going, a lot of issues might happen even faster than what we’ve projected.” 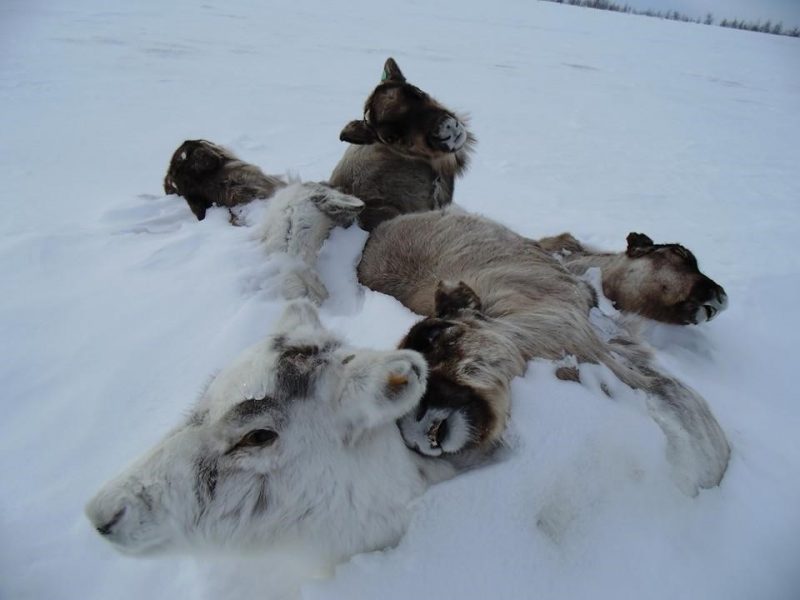 The precipitation change will also affect soil moisture and groundwater, and the underground fungal networks that supports all aboveground flora. And, as co-author Bruce Forbes from the Arctic Centre at the University of Lapland notes, more rain-on-snow events may bring catastrophic starvation events to wild caribou, reindeer, and muskoxen populations: the thick ice crusts which form when the air again cools can be impenetrable, inhibiting the animals from accessing forage. But migratory bird populations in the Arctic are expected to do well with these warmer and wetter conditions.

“The issue facing us today is that the Arctic is changing so fast that Arctic wildlife might not be able to adapt,” said Mark Serreze, co-author of the study and director of the National Snow and Ice Data Center. “It’s not just a problem for the reindeer, caribou and musk ox, but for the people of the North that depend on them as well.”

The research team—which includes members from the University College London, University of Colorado Boulder, University of Lapland, and the University of Exeter—note that if we can remain under 1.5C of global warming, then some of these projected changes (namely the transition to a rainfall dominated precipitation) may not occur in some regions of the Arctic. But if we continue on the current trajectory, which given current global policies means that we could reach 3C global warming by the end of the century, that this transition will likely occur.

“The new models couldn’t be clearer that unless global warming is stopped, the future Arctic will be wetter; once-frozen seas will be open water, rain will replace snow,” says co-author professor James Screen of the department of mathematics and Global Systems Institute at the University of Exeter.

What this precipitation transition means for sea ice, the dominating landscape feature of the Arctic, is unknown. In short, more rain means more fresh water at the ocean’s surface, which might aid sea ice growth, but more rainfall is associated with more heat, which would decrease sea ice growth.

“People might say, ‘Well, what has that got to do with me?’ Well, this is going to affect you, and in actual fact, it is affecting you now,” McCrystall says. “For me, I think what people need to understand is, we live in a global society where everything is interconnected, and that’s true of the climate. We have a global climate. So, what happens in one region, will affect what happens everywhere else.”

This research was undertaken, in part, thanks to funding from the Canada Research Chairs Program, from NSF Grant NNA 198230,  from the European Commission Research and Innovation (CHARTER) and from NERC grant NE/V005855/1.

CNN: Rain fell at Greenland's summit this year for the first time. It's going to happen more often, study says

Daily Mail: Rainfall could replace snowfall in the Arctic by 2060: Global warming will change the main form of precipitation in the area up to two DECADES earlier than previously thought, study warns

Washington Post: The Arctic could get more rain and less snow sooner than projected. Here’s why that matters.