Satellites have been used to measure the thickness of ice in the Arctic since the 1980s. But the technique has only worked in winter, from October to March, when the ice and snow are cold and dry.

In summer, satellites are dazzled by ponds of snow and ice meltwater that pool on the sea ice surface and have been unable to distinguish between melting ice and water.

To solve the problem, an international team of researchers including UM scientists have used Artificial Intelligence (AI) and examined previous data from the satellites to discern between ice and ocean.

“Ice thickness is one of the most important characteristics of any ice cover, whether it be lake or river ice right here in Manitoba or sea ice in the Arctic Ocean,” says David Babb, UM research team member. “Here in Manitoba, we can manually measure ice thickness on ice roads or trails to test them for safety, but in the Arctic the ice pack is so extensive and inaccessible we rely on satellites to measure ice thickness.” 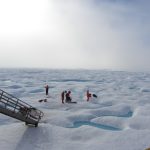 UM researchers working on the sea ice beside the CCGS Amundsen

In addition, the team has constructed a new computer model of the satellite sensor, to make sure it is measuring the correct height and thickness.

It’s good news for the shipping industry. Shipping in the Arctic has increased rapidly in recent years, because of the ice melting. Particularly in the Barents Sea and close to Svalbard the shipping activity is high during summer. To sail safely, the boats need information about where there is ice and how thick it is, in advance. Using satellites, scientists are now able to measure the ice thickness at any time of the year.

“Using the new satellite data, we are finally able to make sea ice forecasts informed by the ice thickness, not only for the winter, but also for the summer. This will reduce safety risks for ships and fishing boats,” says team leader Jack Landy at the Department of Physics and Technology at UiT who began the work while at the University of Bristol.

“We can also predict whether there will be ice or not at a given location in September, by measuring the ice thickness in May,” he says.

According to team member Dr. Michel Tsamados from University College London the findings are also of great importance for our understanding of the weather and the climate.

“When we use the new ice thickness data in advanced climate models, it will improve both our short-term forecasts for the weather at the mid-latitudes and the long-term forecasts that show what climate we will have in the future,” he says.

“The Arctic ice is melting faster than ever,” says Landry.

Babb explains: “This new view of the Arctic ice pack will not only improve our understanding of how ice is lost during summer, but it will also improve our ability to forecast ice conditions for the increasing number of ships operating in Arctic waters. Additionally, this new dataset provides important context required to understand how sea ice influences chemical and biological processes within the Arctic Ocean during summer.”

Here is an animation showing the change in thickness of Arctic Sea Ice over time.

The research team has developed the first dataset showing the thickness of sea ice across the entire Arctic and through a whole year. The results were published in the journal Nature.